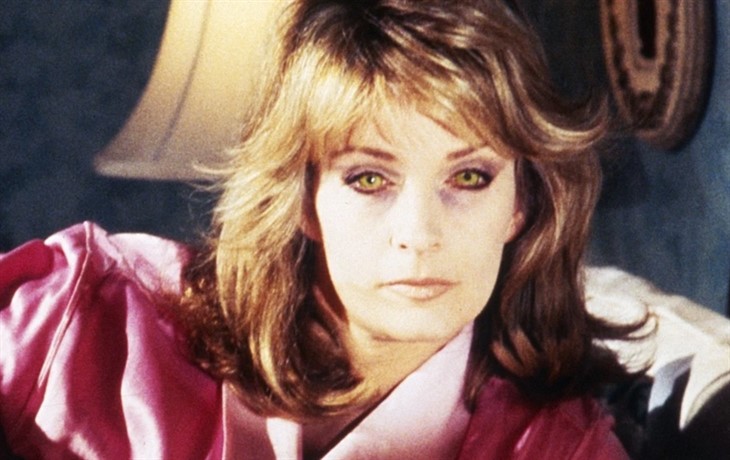 Days of Our Lives spoilers reveal one of the show’s most infamous stories and “characters” making a comeback you never expected as the devil returns to daytime for the first time since 1995.

A new Days of Our Lives teaser is a shocker as it features the laughter we all remember from when Deidre Hall took Marlena Evans places no soap opera character has ever been. We hear haunted music outside the Brady Pub, with the words “Something Wicked This Way Comes” flashing across the screen.

As longtime DAYS fans will remember, the soap broke new ground in daytime camp and daytime drama when an evening in an armoire with Stefano DiMera (Joseph Mascolo) turned his Queen of the Night into Satan himself — or in this case herself. Marlena even brought up her possession three years ago when she was locked in the DiMera tunnels with Vivian (Louise Sorel) and Kate (Lauren Koslow), the first time she had acknowledged that odd point in her life in decades.

During the possession story, Marlena levitated above her bed, sported glowing green eyes, and even managed to morph Kristen DiMera (Eileen Davidson) into a jaguar at one point, which turned John Black (Drake Hogestyn) into a believer. At first, it was unfathomable that his beloved doc was now the devil, but there was no denying it when she performed such feats.

That meant that John had to become the man who exorcised the devil from her soul and it was a good thing he had just learned he was a priest in one of his former lives, as he was the perfect person for the job. In the end, John managed to banish the devil back to his home down below and Marlena recovered from such a horrible ordeal.

We wonder what possesses Marlena to turn into the devil this time around, so stay tuned to Days of Our Lives weekdays to find out.