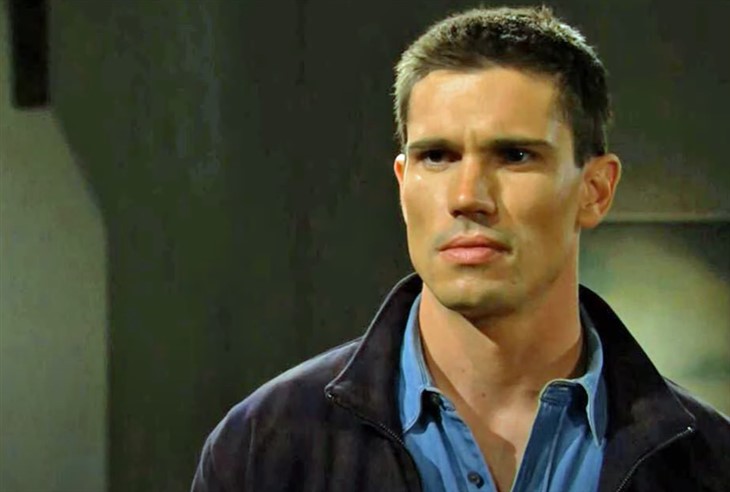 The Bold and The Beautiful (B&B) spoilers tease that a dramatic revelation takes place as John “Finn” Finnegan (Tanner Novlan) learns the truth about his paternity on The Young and The Restless!

Viewers of The Bold and The Beautiful will recall that Finn was devastated and angry as Jack Finnegan (Ted King) revealed the truth in a recent episode of The Bold And The Beautiful. Viewers will recall that first Jack was pressured into revealing the truth that he was his son’s birth father as the result of an affair with Sheila Carter (Kimberlin Brown) years ago. Sheila insinuated if he didn’t tell his wife, Li Finnegan (Naomi Matsuda) and their son Finn the truth, then she would. Jack knew he had to spill the sordid tea then, because if it came from Sheila, the truth would be even more destructive! Jack and Li come to Steffy Forrester Finnegan’s (Jacqueline Macinnes Wood) cliff house and Jack reveals the truth as Steffy is there sitting with Finn. Finn is devastated and angry at his father, feeling like his whole life has been a lie, very similarly to how Li felt when she found out! He felt like he’d been lied to his whole life by Jack!

After the revelation comes out, Finn both leans on and supports Li, his adoptive mother. Viewers of The Bold and The Beautiful will recall that Finn himself had fairly recently been through that type of betrayal, when he found out Steffy and Liam Spencer (Scott Clifton) had shared a drunken one night stand! It is very easy to relate to what Li is going through, and his heart goes out to his adoptive mother. Finn portrayer Tanner Novlan notes that he thinks Li is who Finn gets his strength from, obviously a case of nurture versus nature. Viewers of The Bold and The Beautiful know that Finn was very hurt by Steffy’s betrayal with Liam, and feels embarrassed for both himself and Li that the lie went on for so many years – in fact, his whole life! Finn and Li cling to each other in their pain after Jack’s betrayal with both Sheila and regarding the long-held secret.

Even though Finn has been trying to keep Sheila at arm’s length, finding out she was the one who pushed Jack to tell the truth gives Finn a new perspective regarding his birth mother! Viewers of The Bold and The Beautiful know that Finn’s new perspective on Sheila may be a little warped – he thinks maybe Sheila’s urging Jack to come clean may show some honesty on her part, although as viewers of The Bold and The Beautiful will recall, it was more like finely played blackmail! Finn knows that giving Sheila any kind of chance over this revelation will upset Steffy, but he still wants to find out if she really has changed.

As far as how the truth will affect Jack’s family in the long run remains to be seen. Tanner teases that Jack will have to become very creative in figuring out how to mend fences with his son – this hurt Finn very deeply. It sure didn’t score any points with Steffy. Finn feels like he doesn’t even know who he is anymore because of this lifelong lie! Yes, there were good times and even great times and things in the father and son’s past with one another, but it’s going to take Finn a long time to trust him – he isn’t sure whether his memories were just manipulations on Jack’s part to hide the truth and keep a secret or not! It’s a whole new world!