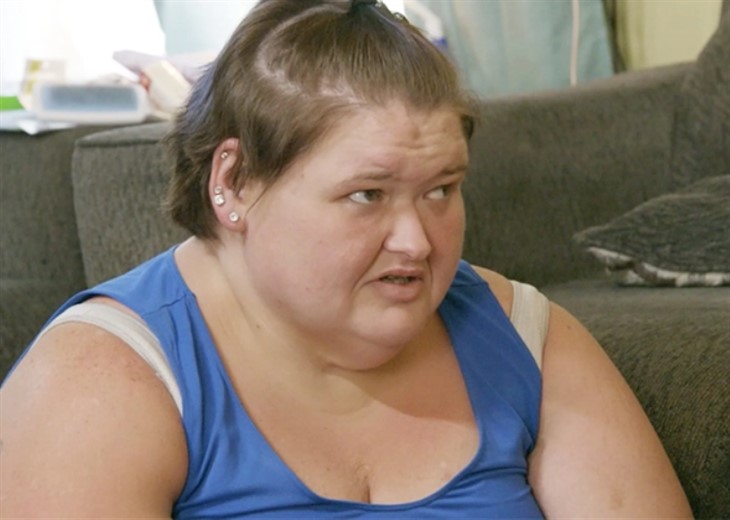 In an upcoming episode of 1000-Lb. Sisters, Amy Slaton tells cameras that her sister is “clearly not ready to lose the weight.”

As Amy ponders moving into a bigger house, the subject of her sister holding everyone back comes up. “It’s time to move, there’s only so much help I can give a person.”

Keep reading and we’ll fill you in on the 1000 Lb. Sister details.

Amy Slaton Needs To Move Into A Bigger House

Amy has pondered moving for a couple of years now, but she had to put it on hold because Tammy got sick. Apparently referring to gastric surgery, Amy says that, according to Chris Combs, he got approved but Tammy didn’t. “She ain’t been walking like to doctor told her to. She ain’t been eatin right.”

Amy’s husband Michael Halterman agreed with the 1000-Lb. Sisters star, saying, “That’s the same way as last year.” But Amy wasn’t done, she said, Tammy is “clearly not ready to lose weight,” adding, “she says she’s ready. She says everything – that you wanna hear. She ain’t ready yet.”

Amy knows more than anyone that Tammy isn’t doing what’s been required of her to lose weight. She also doesn’t approve of Tammy’s new boyfriend, Phillip. She says that the man is “bad news” for Tammy because he “likes big women.” But that’s not all, Amy doesn’t even think Tammy needs to be in any relationship right now.

The 1000-Lb. Sisters veteran has made it clear that she’s now ready to put her family first and it seems that she’s had it with worrying so much about her sister when she won’t even worry about herself. “If she’s gonna eat wrong and do bad all by herself, that’s what she needs to do. But me, I need to move forward for him,” she says, referring to her son, Gage.

“You can push and push a horse to water and, at the end of the day, that horse is just going to get tired and pissed off at you.”

Michael agrees with his wife saying that Amy needs to worry about herself and that she can’t let anyone, including Tammy, hold her back. Get the rest of the story by tuning in to 1000-Lb. Sisters Mondays at 9 PM Central on TLC. Return here frequently for more spoilers, news, and updates.