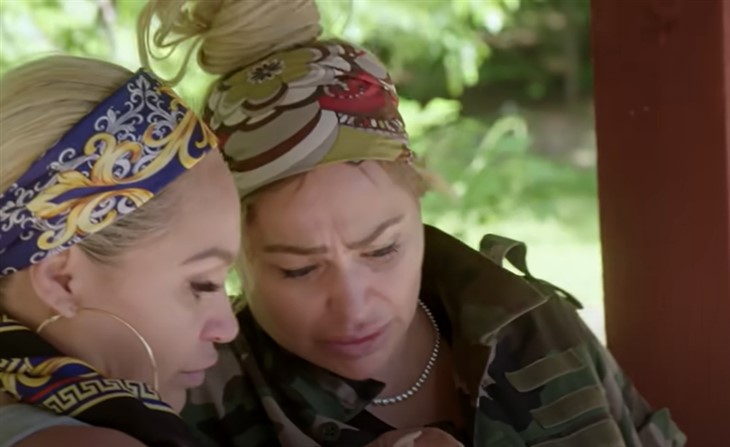 TLC’s “Darcey and Stacey” star Darcey Silva thinks her twin, Stacey Silva, is blind to her fiancé Florian Sukaj’s cheating and would rather she didn’t suffer heartache the way she had in previous relationships.

The two sisters have always been close and always have supported one another, and as viewers will recall from other shows in the “90 Day Fiancé” franchise, Darcey has had her share of heartaches, first with Jesse Meester, and then with Tom Brooks.

Both men were disappointments and caused Darcey nothing but heartache, and Stacey always had her back. Darcey wants to protect her sister now that photos of Florian canoodling with other women have surfaced online, and they appear to be recent! Fans saw a little bit of Stacey and Florian’s relationship play out on “Before The 90 Days”.

Now viewers will see the relationship front and center on the sisters’ new spinoff “Darcey and Stacey”. Like most “90 Day Fiancé” couples, Stacey and Florian met online. Their attraction was very strong, and they instantly connected, with Florian proposing after only six months of dating. They met up multiple times in Albania, and now Stacey is working to bring him to America so they can get married. The question in protective sister Darcey’s mind is, however, has Florian been cheating on Stacey, and should she interfere between them?

On the season premiere, Darcey talked about her disturbing discoveries to their father, Mike. She reveals that she had asked Florian about them, but he brushed it off as “nothing”-of course, to Darcey, it looked a little sketchy. One photo showed Florian and the woman in a car driving, another showed her kissing him on the cheek, which seems to be more than platonic friendship, and the other one was even worse – they appeared to be in bed with him shirtless and the woman in lingerie! Darcey indeed had warned Stacey, but she forgave him because she trusts Florian and believes in him, she told their dad. Darcey is worried that Stacey is being gullible.

TLC 90 Day Fiance’ Spoilers – Mike Has His Suspicions As Well

Darcey worried that Florian may really just be using Stacey for a green card, and Mike agrees with her on that point. He said if Florian has a side chick then he’s a player – only Mike didn’t put it quite so delicately! If that is true then there is no excuse and the relationship should be put to a stop. Mike is just as suspicious as Darcey is about those photos that surfaced online – and he is going to have a very serious discussion with Florian when he gets to America. He will interrogate him about all the “whos”, “wheres”, “when” and “whys” and it will be a man to man talk.

Stacey herself has also been asked about these photos and what they mean for her and Florian’s relationship, although she is not likely to say much about it. She has hinted that things have not been going so well lately.

They have had a long relationship and she thinks it was pretty healthy and has thought they both wanted it to work, although some drama has unfolded! But for now, Stacey is taking things day by day and is happy for her sister’s undying support!