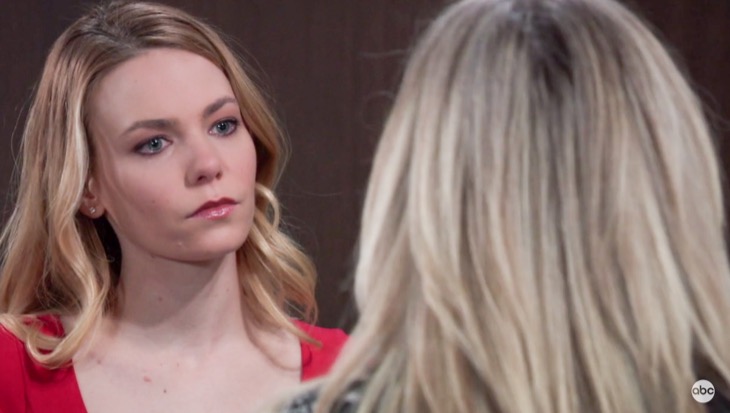 ABC General Hospital spoilers tease that Laura Wright’s character Carly Corinthos will soon be sparring with Nelle Benson (Chloe Lanier). We have seen the two ladies get heated during the baby Wiley trial but according to Laura, the war is about to rachet up even more.

The Emmy-winning actress spoke to Good Morning America recently and spilled a bit about the two arch enemies. While it looked like they could have had a moment, apparently they will not make up. During the trial, Carly told Chloe that she had a hard life but that she can do better than the path she is currently on. Fans took that to mean that Carly was softening toward her opponent, but the thaw never happened. Of course, Nelle would have had to meet her halfway, and that is not in her wheelhouse.

Laura told the show, “Oh my gosh, I was so excited to know we were coming back. Not just to be back at work and be around everyone we love and our GH family, but also our fans. Our fans have been dying to have us back.”

When asked what she could reveal about her character’s upcoming antics, she was coy but did spill a big reveal.

She said that there is only one thing she can reveal and she might even get in trouble for doing so! Nonetheless, she let it spill that Carly and Nelle will engage in a huge confrontation. She also shared that she is, “so excited to be back,” and especially happy to be able to see to the cast and crew again.

After 57 years on the air, the show shuttered on March 13 due to the coronavirus pandemic. As Laura noted, the shutdown was supposed to be for four weeks but it lasted four months. GH is the network’s first scripted show to be back on the air with new content.

The baby custody trial is over but Nelle has a trick up her sleeve. Is this why she and Carly are going to get into it? For now, be sure to tune in and see the Nurses Ball which has turned into a phone bank fundraising telethon this year. The purpose is raising money for those health care works on the front lines and more drama is sure to come this week.