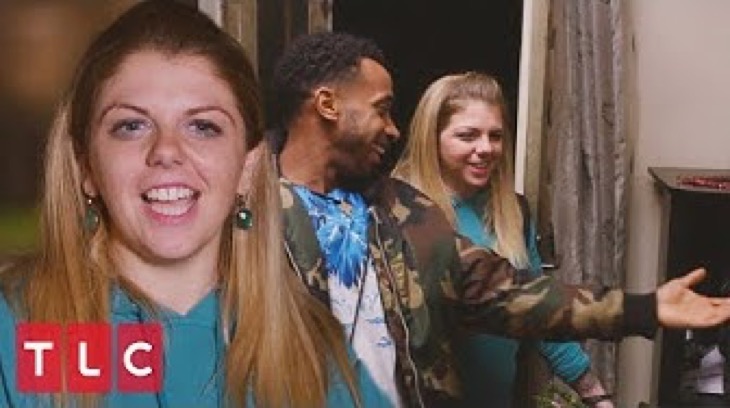 TLC’s “90 Day Fiancé-The Other Way” star Ariela Weinberg admits to Entertainment Tonight’s Melicia Johnson in a recent interview that she had a panic attack when she reunited with Biniyam Shibre upon arriving with her mother to Ethiopia.

In the sneak peek of the upcoming episode “Don’t Grumpy Stop” viewers will see a scene of Ariela and her mother first arriving in Ethiopia, and Biniyam Shibre shows up with a bouquet of roses for Ariela and a pickup. First, they embrace tightly as Ariela tells Biniyam not to smash their baby! As Ariela talks to her mother as Biniyam loads their luggage in the back of the pickup, she says that she has a lot of anxiety, and that everything seemed different than when she was with Biniyam in Ethiopia before, which of course is when she became pregnant with his baby.

Then viewers see that Ariela, sitting in the seat of the pickup with Biniyam, starts holding her head in her hands and then covering her eyes, and he asks if she is hurting, assuming that perhaps she has a bad headache. She told Biniyam that she was upset! In reality, as she explains to Melicia Johnson in the interview, she was having a panic attack! Melicia also commented that she couldn’t see any sparks coming from Ariela in the scene where they reunite, like maybe Biniyam’s new look isn’t doing it for Ariela – but then, when one is very pregnant and having a panic attack, that would tend to suppress romance just a tad!

Biniyam Does Look A Lot Different

Biniyam does look a lot different, Ariela admits. When they first met, he had really long dreadlocks and now he’s in a very short hairstyle, looking even just a tad conservative when compared to his previous borderline “wild man” look. It was the dreadlocks that had gotten Ariela’s attention initially and made him stand out from the “crowd” when she first saw him.

She also says he looks skinny compared to his previous look which was all bulked out – but then, Biniyam was meeting Ariela’s mother and had a shirt on! Still, he did seem like a whole different man compared to what he looked like when they met and had their whirlwind romance!

Melicia Johnson then comments from the Entertainment Tonight broadcast site that apparently Biniyam and Ariela must not have chatted by Skype or Face Time or another internet service where they would have seen each other as they chatted. Melicia also notes she likes Biniyam’s new short cut and thinks it’s cute, however she also notes that Ariela has much more to worry about than Biniyam getting a haircut and maybe losing a little weight!

Ariela got herself together and the panic attack had abated by the time he took her to the apartment he had rented for the two of them, but then there was another shock – although the bedroom really doesn’t look too bad aside from being a little dark, she really freaks out when she sees the bathroom; it has a toilet, although there is no lid, and only a sink – and obviously moldy! There is dirt and mold all over the walls, and around the base of the toilet, and on a beat-up dresser that sits next to the sink!

Definitely unhealthy for a mom and a baby! Ariela says she was smiling on the outside but having a fit on the inside, and says that the apartment reminds her of the movie “Saw”! “Saw” was an American horror film starring Cary Elwes, Danny Glover, and others from 2004 where two men awake to find themselves chained in a large dilapidated bathroom, with one being ordered to kill the other or his family will die! She is even more certain that when her mother sees it that she will grab her and take her running for their lives!

Perhaps, in Ethiopia, this is considered a luxury apartment – the interviewer notes at least Biniyam tried, even though the color scheme is dark and depressing. But the mold – that could make Ariela and the baby sick so that just won’t do! Ariela noted in a previous interview from May 2020 with Melicia that she had traveled around with Biniyam and was aware that standards in Ethiopia were maybe not as high as in the United States. She also had noted that it was one thing to travel and see things that were not as advanced, but another thing to live there, especially with a baby.

She and Biniyam had “roughed it” a lot with camping and whatnot during their romance when she had gotten pregnant. If it was just her and him, maybe she wouldn’t be so worried – but now there is a baby coming and she wants way better living conditions for the baby!

Stay tuned to “90 Day Fiancé-The Other Way” and check back here frequently for all the latest news, updates and gossip about all of your fave “90 Day Fiancé” shows and stars!