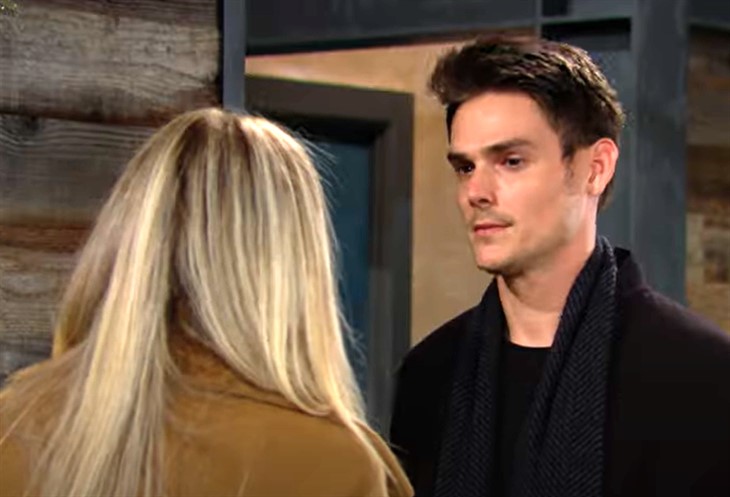 The Young and The Restless spoilers tease that Adam Newman (Mark Grossman) will crash Sharon Newman (Sharon Case) and Rey Rosales’ (Jordi Vilasuso) wedding. However, he will be spotted by Phyllis Summers (Michelle Stafford) outside the door of Society, where the wedding is planned to take place. Phyllis will try to stop him this week on The Young and The Restless!

While Adam and Phyllis have never dated or been romantically involved in any other way, they do go back a few years. Phyllis knows him through his family, having been married to Nick Newman (Joshua Morrow) in the past – a few times! Phyllis knows what it is to be not accepted by the “high and mighty Newmans” and can relate to Adam so they are friends as well as in-laws more than once.

They kind of bonded as town pariahs, one could say! They have had their trips around the block with one another more than once and have either been buddies or have been at odds with one another. For instance, Adam wasn’t too happy with Phyllis when she tried to get dirt on him and Chance Chancellor (Donny Boaz) in Las Vegas by bugging a table and having a waitress spy on him!

She even flew to Las Vegas herself trying to track Adam down and find out what his “Vegas secret” was! He helped her a couple of times also on The Young and the Restless, getting property that wasn’t really hers to get too though, so they traded and owed each other favors frequently in the past. When Phyllis spots him getting ready to crash Sharon and Rey’s wedding, she makes it her mission to save him from a whole lot of trouble if she possibly can!

Phyllis knows that Adam always gravitates to Sharon somehow on The Young and the Restless, any time he is in a time of distress, especially. After Phyllis broke up Nick’s marriage to Sharon, Sharon got involved with and married Adam. They were only married for a couple of years, however. During that time Adam appears to have become emotionally dependent upon Sharon. Emotional dependence does not make a healthy relationship, and Sharon, a trained counselor should know that.

The Young and the Restless spoilers reveal Adam is never out of her rearview mirror, so to speak, and she is never out of his either, even when they both are involved with other people! Lately, Phyllis has really been too busy sparring with another ex-in law, Nick and Adam’s sister, Victoria Newman (Amelia Heinle) and trying to keep afloat financially after Victoria tried to swindle The Grand Phoenix out from under her in a hostile takeover! Even Victoria and Nick’s mother, Nikki Newman (Melody Thomas Scott) didn’t like Victoria’s ruthlessness and spite with that endeavor and told her so!

But Nick paid Victoria off and Phyllis is paying him back, so it’s time to concentrate on the other brother again. She knows that Sharon and Rey are getting married at Society, because Nick is part of the wedding. She sees Adam getting ready to crash the wedding at the door of the restaurant and she comes up behind him, wanting to know what he thinks he is doing!

The Young and The Restless (Y&R) Spoilers: Phyllis Pressures Kevin To Play A Dangerous Game, Will He Agree? https://t.co/9bqQyontat pic.twitter.com/vKgNYQaC9n

She tries to talk him out of going in, knowing that he will be asking for trouble from not only Nick, but Rey, and probably his brother Arturo Rosales (Jason Canela) who is also attending. That’s three big men against one of Adam, and Adam’s not that big; but then, that is the eleven year old who killed a man who was harassing his blind mother! Phyllis can’t keep him out of the wedding, but at least she tried!