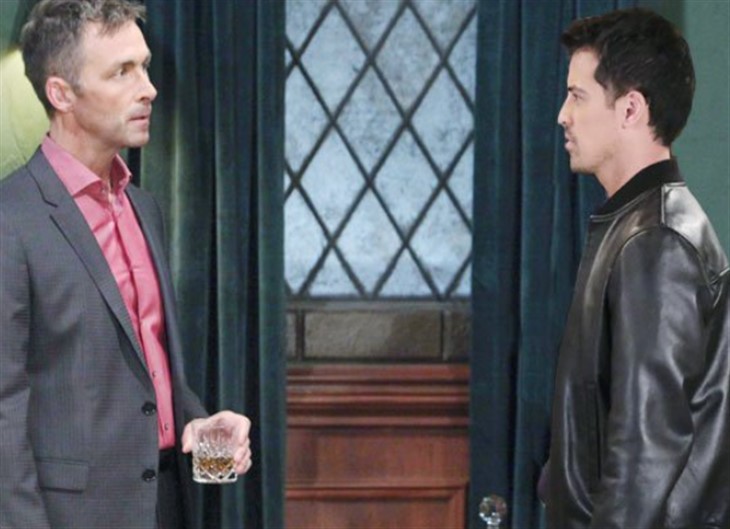 General Hospital spoilers tease that with her mother, Lulu Spencer (Emme Rylan) in an indefinite coma, little Charlotte Cassadine (Scarlett Fernandez) needs all the family she can get! She once thought her uncle was her guardian angel. Her papa, Valentin Cassadine (James Patrick Stuart) knows that Charlotte needs family too. The feud over the Cassadine estate and holdings is long over, will Valentin and Nikolas make peace for Charlotte’s sake?

General Hospital viewers will recall that Charlotte has two uncles on her mother’s side. Nikolas is her half-uncle, while Lucky Spencer (Jonathan Jackson) is her whole uncle, meaning his parents are Luke Spencer (Anthony Geary) and Laura Webber Collins (Genie Francis). Nikolas shares Laura as a mother but Stavros Cassadine (most recently Robert Kelker-Kelly) was his father. Lucky is out of the picture, his last known location somewhere in Africa.

He did not even return when his sister went into her coma. But Nikolas lives right there in Port Charles, and Charlotte knows him. She was a little upset with him when he failed to show up to save her from drowning last year when she tried to prove his existence to Rocco Falconeri (O’Neill Monahan) but she has probably gotten over it by now. Valentin doesn’t trust Dante Falconeri’s (Dominic Zamprogna) healing from post-traumatic stress disorder and brainwashing. If he and Nikolas were to make peace for the sake of Charlotte, Nikolas would be a valuable ally in ensuring Charlotte’s safety.

Besides, Nikolas loves children and if the two former enemies can work together and get to know each other and some trust is built, Nikolas would be happy to have Charlotte over for frequent horse riding! Undoubtedly Nina Reeves (Cynthia Watros) has worked out some horse riding appointments with Nikolas as well. It would be very easy for Nina and Charlotte to come and ride their horses together when Nina has Charlotte, as well.

General Hospital viewers will recall that Charlotte has not had the most stable life. Valentin Cassadine wants to fix that and if Nikolas knew more of how Charlotte’s life has been, he would want to as well. For the first four of five years of her life she lived with her surrogate mother, Claudette Beaulieu (Bree Williamson). She was quite happy to come live with her papa Valentin after Nikolas’ presumed death and Valentin’s move into Wyndemere Castle. Claudette mysteriously disappeared, although at one point General Hospital viewers saw that Cassandra Pierce (Jessica Tuck) had apparently kidnapped her. Cassandra met her apparent end after she kidnapped Charlotte, and Valentin put her on a boat with a bomb! NOBODY messes with or tries to harm Valentin’s child if they want to live to tell it!

Nikolas would be pretty much the same way! With the dangers of a drug lord disguised as a philanthropist and drugs running rampant through Port Charles, Charlotte needs all the emotional security she can get. Insecure tweens and teens are very vulnerable to drug dealers and that is the last thing anyone wants for Charlotte! With a Cassadine uncle coming into her circle of family, and her papa watching out for enemies as well Charlotte will feel quite safe!

The Bold And The Beautiful Spoilers: Thomas And Hope’s Future, Couple Swaps In 2021?