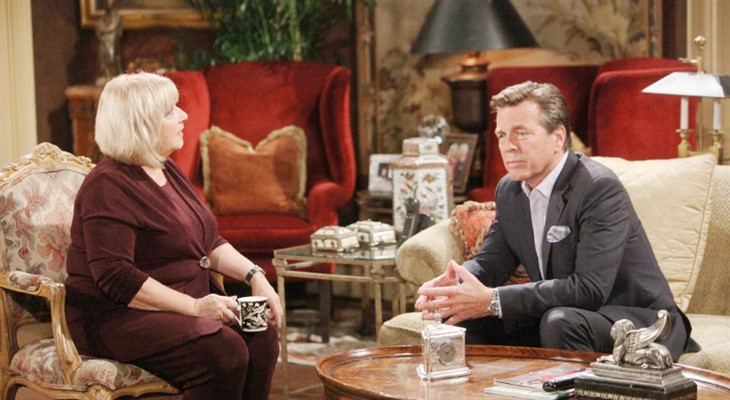 The Young and the Restless spoilers document that John Abbott (Jerry Douglas) was a great man. He stood by his children, believed strongly in family and friendship, had a visionary business mind, and supported many worthy causes in Genoa City, Wisconsin.

John had two children, Jack Abbott (Peter Bergman) and Traci Abbott (Beth Maitland), with Dina Mergeron (Marla Adams). He had another, Billy Abbott (as now played by Jason Thompson), with Jill Abbott (Jess Walton). Devoted viewers know that Ashley Abbott (Eileen Davidson) was thought to be John’s daughter, but was, in fact, a child Dina had with Brent Davis (as last played by Bert Kramer).

Jack, Ashley, Traci, and Billy were born in that order. Each person made their dad generally proud during their lives. But which children are living by the principles of John espoused?

It would take a while to list the many accomplishments and failures that Jack and Ashley have had in their lives. They’ve enjoyed personal success, meaning having positive relationships and marriage, which included children. They’ve also created varying degrees of business success.

However, it greatly pained John when Jack and Ashley’s sibling rivalry got out of hand. Sadly, that pattern continued long after John’s death in the mid-2000s. But each person’s life also included other preventable mistakes, some of which were very serious.

Billy is a tortured soul. More than any of his Abbott siblings, he’s arguably had the toughest road. The horrific loss of Delia Abbott (Sophie Pollono) damaged Billy and can be cited as driving his erratic behavior in more recent years.

Traci has the purest soul among the Abbott children. Colleen Carlton’s (as last played by Tammin Sursok) death naturally devastated her, but didn’t cause the veer away from reality as it did for Billy.

Traci donated Colleen’s hart to Victor Newman (Eric Braeden), which allowed her to turn tragedy into a gift. Maitland’s character remains a solid family member and continues to use her writing talent to remain focused.

The Young And The Restless Spoilers – There Is No Right Call

Strong parents don’t play favorites. So, John wouldn’t pick one of these children and state which has lived by his principles more than another.

The Young and The Restless Leak: Michael Baldwin To Get A Major Storyline When New 'Y&R' Episodes Air #yr #youngandrestlesshttps://t.co/gX9i2muUE8

However, Y&R fans can make a subjective choice. So, who among Jack, Ashley, Traci, and Billy is living by John’s principles, or is each doing so uniquely?