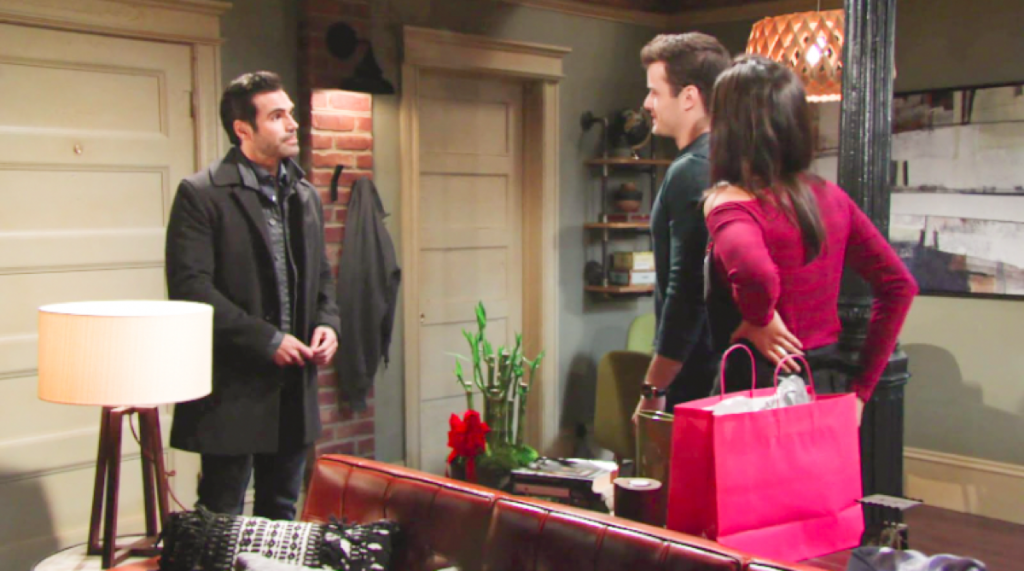 The Young and the Restless (Y&R) spoilers for Wednesday, February 12, tease that Billy Abbott (Jason Thompson) will get updates on Ripley Turner’s (Christian Keyes) arrest. In the Grand Phoenix elevator, Billy has a celebration in mind. Amanda Sinclair (Mishael Morgan) suggests she may be a game, but she’s curious about what this celebration involves. Billy urges Amanda to trust him before he takes her up to the roof.

Amanda eventually sits on the ledge with Billy and admits she feels alive. She learns Billy and Victoria Newman (Amelia Heinle) filled the kids in on their split. Billy thinks it was the right call since he couldn’t live under such stifling expectations. He encourages Amanda to yell with him and she does with some gentle nudging.

After they finish screaming their heads off, Amanda says she has to go. She thinks she found her voice with Billy’s help and can now roar in a whole new way. At Lola Abbott’s (Sasha Calle) place, Rey Rosales (Jordi Vilasuso) pops in and offers a pep talk. Lola’s thinking about visiting Celeste Rosales (Eva LaRue) and asks Rey if he wants to come, too. Rey has to decline since he’s busy with other things.

At Crimson Lights, Summer Newman (Hunter King) speaks with her mom over the phone. Phyllis Summers (Michelle Stafford) begs her daughter to tell her she’s not already back with Kyle Abbott (Michael Mealor). Of course, Summer is indeed back with Kyle – and he’s sitting right across from her during this phone call.

After Summer insists she knows what she’s doing, she argues that Phyllis shouldn’t cancel her trip. Summer asks about the reason for this Vegas getaway, so Phyllis contends that she’s feeling lucky. Once the call’s over, Kyle gets why Phyllis is feeling protective. He’s sorry about causing pain and kisses Summer’s hand as Nick Newman (Joshua Morrow) walks in.

After Kyle heads out, Nick joins Summer to give her a hard time about this “Skyle” reunion. He notes that it’s only been like a day since Kyle and Lola broke up. They’re still married, but Summer is undeterred. Nick gets nowhere, so he just wants Summer to promise that she’ll be careful with her heart. Summer promises and gets a kiss on the cheek as Nick leaves.

Back with Kyle, Rey bumps into him on the patio. Kyle knows Rey must have a lot to get off his chest, so he invites him to go for it. Rey blasts Kyle for being a “selfish, manipulative, entitled dirtbag.” He’s furious over everything Kyle put Lola through.

Kyle eventually ends up at the apartment and learns his belongings have been packed. He muses aloud about everything seeming so final, but Lola contends that’s because it is final. She wants a quick divorce and notes that on paper, it’s like they never even happened. Kyle will remind Lola that they did happen. It was real, even if it wasn’t forever.

At the Grand Phoenix, Phyllis spots Billy in the lounge and recognizes the glint in his eye. She assumes Billy’s going to stir up some chaos. Billy is enjoying life more than he has in a long time. Although Phyllis reflects on seeing Billy at his worst, Billy thinks he’s in his prime right now. This is peak Billy in his opinion.

Next, Phyllis talks to Nick about her Vegas mission. Nick doesn’t think it’s a good idea to follow Chance Chancellor (Donny Boaz) and Adam Newman (Mark Grossman), but Phyllis insists she’s a gambler. After Nick warns she’ll lose big, Phyllis makes it clear that she doesn’t plan on getting burned.

At Jabot, Kyle reconvenes with Summer and admits Rey might be right. Maybe Kyle is selfish and manipulative. He’s still beating himself up over all the pain he caused, but Summer seems eager to see what the future holds for them. This is their time.

Back at Crimson Lights, Rey wonders if Amanda’s sure about this meeting with Ripley. Amanda just needs a few minutes to set him straight. Although Ripley won’t face charges, his paperwork is still ready if Amanda needs it. She rubs in the fact that she’s got all the power now. Amanda wants Ripley to leave town and never come near her again. If Ripley disobeys Amanda’s orders, his life will be over.

Ripley scores a one-way ticket back to Madison as Amanda takes off. Rey feels like Amanda did Ripley a favor, but Ripley doesn’t seem to think so. He ominously suggests that Amanda isn’t as strong as she thinks she is.

The Young and the Restless spoilers say some hot drama’s ahead on the CBS soap. We’ll keep you posted as other Y&R news and rumors emerge. Stay tuned to see what else is brewing in Genoa City.