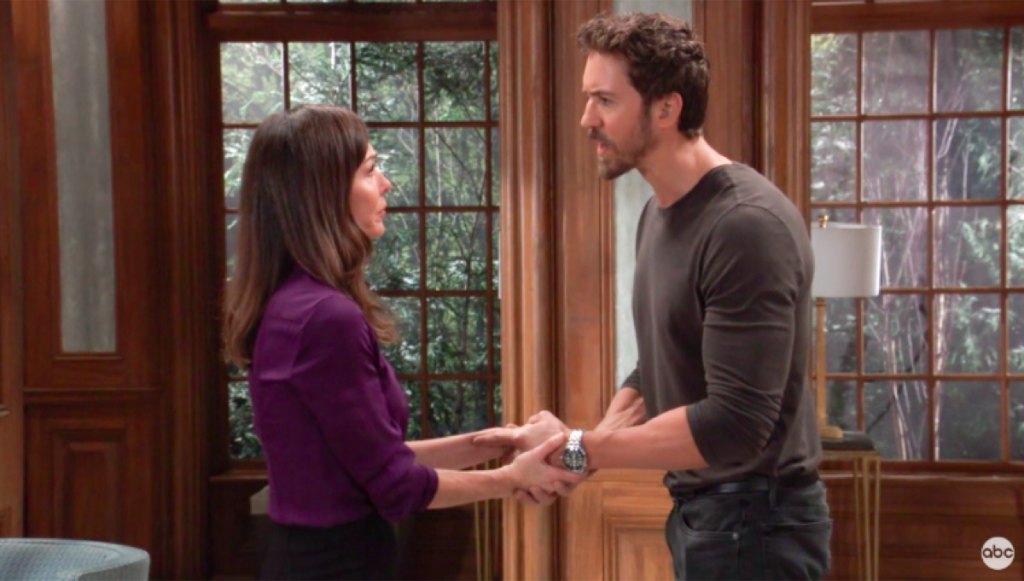 At the Jerome Gallery, Ava Jerome (Maura West) is adjusting a painting when Trina Robinson (Sydney Mikayla) enters and they hug. Trina asks Ava about the marriage, she wonders why she would marry Nikolas a man she was seemingly afraid of in Shadybrook

At General Hospital (GH), Nikolas Cassadine (Marcus Coloma) enters and runs right into Elizabeth Webber (Rebecca Herbst). She asks what he’s doing there and he says he’s going to the lab. Franco Baldwin (Roger Howarth) walks over and says as two guys back from the dead, they have some things to straighten out.

At Kelly’s diner, Charlotte is pushing her food around on the plate as her mother Lulu Spencer (Emme Rylan) tries to console her. Suddenly Valentin Cassadine (James Patrick Stuart) enters and she runs over to hug her dad.

Lulu invites Valentin to sit down with them for breakfast as they catch up. Lulu lays into Valentin about not trying to visit their daughter without permission.

At Turning Woods, Brook Lynn Quartermaine (Amanda Sutton) is trying to convince a nurse to let her see Mike Corbin (Max Gail). Sonny Corinthos (Maurice Bernard) enters and says she is family, but then tells Brook Lynn that Mike cannot have visitors.

Sonny explains to Brook Lynn about the incident in Brooklyn and her dad is terrified. Mike Corbin (Max Gail) walks in and he seems to recognize her as they embrace. They start to tell old stories as Mike believes that Brook Lynn is actually Lois.

At General Hospital (GH), Sam McCall (Kelly Monaco) and Jason Morgan (Steve Burton) kiss. Hamilton Finn (Michael Easton) walks in on them and Sam mentions that he has info on Peter August.

Finn tells Sam and Jason he’s worried about his daughter Violet being in danger.

In Anna Devane’s (Finola Hughes) mansion, she continues to argue with her ex-husband Robert Scorpio (Tristan Rogers) about Peter. As they argue closer to the front door and he calls Peter a son of a bitch, the door opens and there’s Peter August (Wes Ramsey).

Peter walks in as Robert insists he has her best interest at heart always.

At GH, Franco Baldwin (Roger Howarth) confronts Nikolas Cassadine (Marcus Coloma) about Hayden’s disappearance and how unfair it is to everyone. Franco tells Nikolas he needs to fix this as they get heated, Elizabeth intervenes.

Alexis Davis (Nancy Lee Grahn) spies Nikolas and wonders if he’s there for his blood test to prove who he is. Elizabeth interrupts and says he and Valentin deserve each other.

At the Jerome Gallery, Ava explains to Trina that they were old flames and have rekindled the fire. As they chat, Franco Baldwin (Roger Howarth) arrives to see his friend. Franco wonders what the heck she is doing with Nikolas and she asks him to commission a painting of her at the castle.

She says his paintings are beautiful and she wants to hire him to do it, she’s loaded with money right now.

Finn tells Sam and Jason that they cannot get Anna in trouble for revealing information about Peter. Finn comes home and Anna comes clean about the argument between Peter and Robert.

Franco tells Elizabeth about the painting commission and she agrees. Franco sees that someone messed up the initial sketch of Ava (aka Charlotte).

Sonny thanks Brook Lynn for connecting with Mike and understanding what he is going through. Brook Lynn says the best thing they can all do is see him and listen to him. ………flash to preview