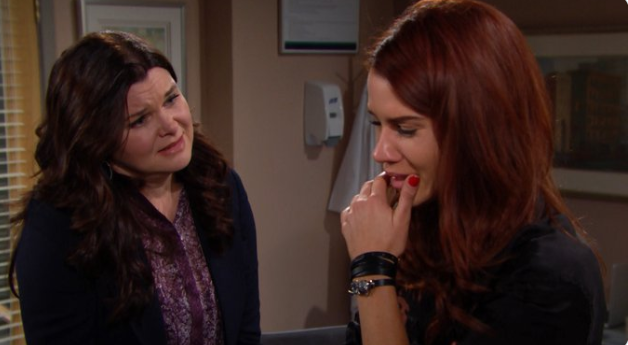 Sally Spectra (Courtney Hope) was told that she’s going to die on ‘The Bold and the Beautiful’. The news sent shock waves through her body that’s being impacted by a malady that wasn’t initially revealed to the audience.

Hope for a miracle cure is justified since details involving her health condition aren’t known. Plus, this is B&B where an unlikely comeback is always possible and in this case, deserves to happen.

Sally tried to downplay what was happening. But her inability to draw a straight line, as she was plodding away on Steffy Forrester’s (Jacqueline MacInnes Wood) fashion line proved too much to ignore.

Seeking a medical opinion, Sally had tests taken at the hospital. Thankfully, Katie Logan (Heather Tom) happened by the room where she was waiting for results. To have received the dire diagnosis alone would have been much harder to handle.

Heart-tugging scenes played out where Sally learned that she’s going to die in the near future. In an extra creative twist, B&B showed Sally and Katie’s emotional reaction shots without sound, as the camera view came from outside the room where they were seated. That came after a stretched episode reveal where Doctor Escobar (Monica Ruiz) relayed the shocking news to Sally and Katie more than halfway through that day’s plot.

B&B Spoilers – Getting The Bad Word Out

Katie’s told to Bill Spencer (Don Diamont) puts him in an awkward position, as Sally insisted that she doesn’t want Wyatt Spencer (Darin Brooks) to know. With the ‘Wally’ split still fresh, Sally rejects the idea of Wyatt taking pity on her.

But Katie needs to get the word out to as many people as possible due to the circumstances. Sally’s doctor told her to inform her support system, which then only included Katie.

Clearly there are many other people who both need and deserve to know what might happen to Sally. Ranking with them would be her grandmother, Shirley Spectra (Patrika Darbo) and Sally’s friends, who were also employees at Spectra Fashions.

Sally appears to have an incurable illness. In reality, a poor soul in this circumstance would normally die. However, the daytime world allows for miraculous soapy circumstances to occur, if TPTB allow.

Hope is a well-liked actor, whose performances in a variety of arcs have proven stellar. Sally keeps the tradition of the Spectra family alive, with its lineage dating back to 1989. That’s when Darlene Conley (Sally Spectra I) played the head of a fashion house that battled Forrester Creations, with Conley’s iconic character being said to be Sally’s aunt many years later.

Here’s hoping that Hope isn’t leaving B&B. Sally is a dynamic personality who deserves many more years of life.