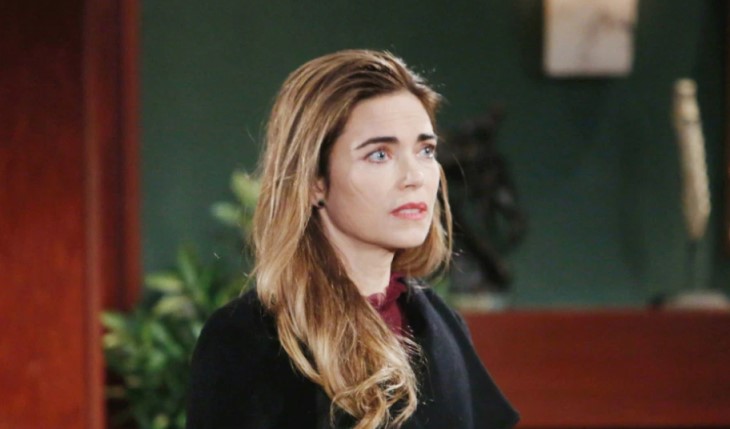 The Young and The Restless spoilers tease that Victoria Newman (Amelia Heinle) will want revenge on her brother, Adam Newman (Mark Grossman) for ruining her father’s life in an upcoming episode of The Young And The Restless! 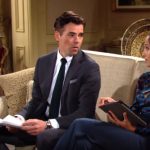 As Victor and Victoria Newman are in the corporate offices of Newman Enterprises in the CEO office, discussing Victoria’s return to work and how she is doing, Adam enters to discuss with Victor the proof he has about his killing AJ Montalvo (uncast character) and covering it up. Victor hands Victoria the envelope of proof he had left previously, which was compiled with the help of his childhood friend Alyssa Montalvo (Maria DiDomenico). She pulls it out and reads over it.

Adam tells her the short-form narrative that Victor had killed a man in Kansas who was harassing his mother and had covered it up. Victoria gets in his face, calls him an expletive and says he feels sorry for him and worse for Connor (Judah Mackey). She tells him he disgusts her! Adam warns her that if he gets what he wants, that she will be out of a job and will be visiting her father in prison!

But it doesn’t have to be that way – he can bury the story. Victoria continues lambasting Adam and tells him he deserves nothing! Victor tells Victoria that her brother is trying to blackmail him. She continues to rant at Adam. Adam notes that Victor is being awful quiet, and he thinks it’s because Victor knows that this is a serious threat. He presses Victor as to whether they have a deal or not, and Victor says this is the lowest that he’s ever seen Adam go! Victoria orders Adam to leave, and Adam says he won’t wait forever. After he leaves, Victor has something to tell Victoria.

Victor tells Victoria that even though it seems like Adam has him over a barrel since he cannot DISPROVE the evidence in the envelope if Adam were to go ahead with the exposé publicly, it could cause irreparable harm to Newman Enterprises and it may not be something that they can spin to make it not look so bad. Investors may drop out, all the Newmans will be questioned by reporters, and it will just be a nightmare they may not be able to recover from or make go away.

Victor doesn’t want to cause Victoria any more stress than what she already has because it’s not good for her – she has just gotten back to work after a very, very serious injury and now that she has been diagnosed with angina, that only makes things all the worse. “Adamgate” couldn’t have happened at a more terrible time and Adam is striking some low blows, kicking his sister when she’s been down and honestly, Adam is out-Vectoring Victor!

But he tells her he has a plan – she may not understand it when it rolls out, but he thinks by executing this plan he can get things – and Adam – under control again. Victoria vows to get revenge on Adam for ruining Victor’s life!

General Hospital Spoilers: Is Valentin Right In Thinking He Has Another Shot With Nina?