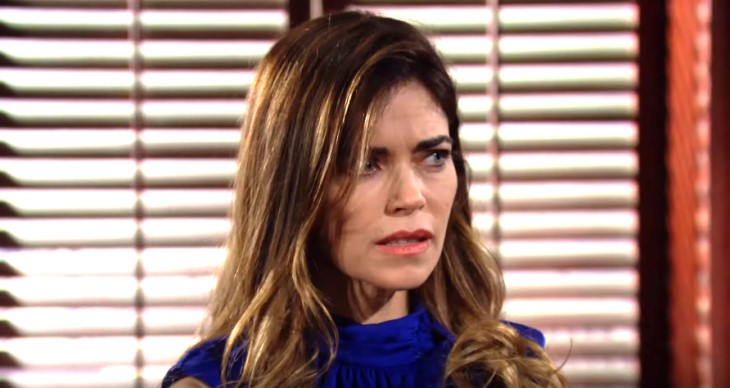 The Young and the Restless spoilers indicate that Victoria Newman (Amelia Heinle) will go after Nate Hastings (Sean Dominic) as revenge against Amanda Sinclair (Mishael Morgan).

Victoria’s marriage to Billy Abbott (Jason Thompson) ended because he decided he wanted to live a carefree lifestyle. Billy felt that Victoria didn’t accept him for who he was, but his friend Amanda did. Victoria blamed Amanda for the demise of her and Billy’s relationship. She even accused the two of having an affair, which never happened.

Even though it looked like Amanda and Billy could possibly be heading towards romance, the two decided they were better off as friends.

Billy now seems to be inching towards a new relationship with Lily Winters (Christel Khalil). As for Amanda, she’s decided to take her friendship with Nate to the next level.

Nate has been a good friend to Amanda since she arrived in town. He defended her against Devon Hamilton (Bryton James) and Elena Dawson’s (Brytni Sarpy) accusations.

Amanda has enjoyed spending time with Nate, yet given her past with Ripley Turner (Christian Keyes), she was reluctant to start dating again.

But with Ripley behind bars, Amanda is ready to regain control of her life. She’s also ready to take a chance on love.

Amanda and Nate are growing closer, and it’s only a matter of time before romance begins.

However, the couple will have a big problem in the form of Victoria.

Victoria still has some hostility towards Amanda due to her role in the breakup of her marriage. She wants Amanda to feel the same hurt she experienced, and the way to do that is by stealing her man.

Nate has been tending to Victoria following her stabbing, and she could use this as her opportunity to make her move on the handsome doctor.

Victoria will use her condition to get Nate to rush to her side to check on her. With Victoria spending more time with Nate, she’ll convince him that they’ll be a perfect match together.

But will Nate give in to her temptation.

Years ago, Y&R toyed with the possibility of a Nate and Victoria pairing after he helped her recover from the trauma of JT Hellstrom’s (Thad Luckinbill) abuse. However, nothing ever became it except the two just being friends.

Now, it seems the show could be pairing the two back up, only this time the circumstances are different. Victoria isn’t going after Nate because she loves him; she wants to do this to hurt Amanda.

While Victoria may succeed in her plot to get revenge on Amanda, she’ll cause even more pain when Nate realizes she was using him.