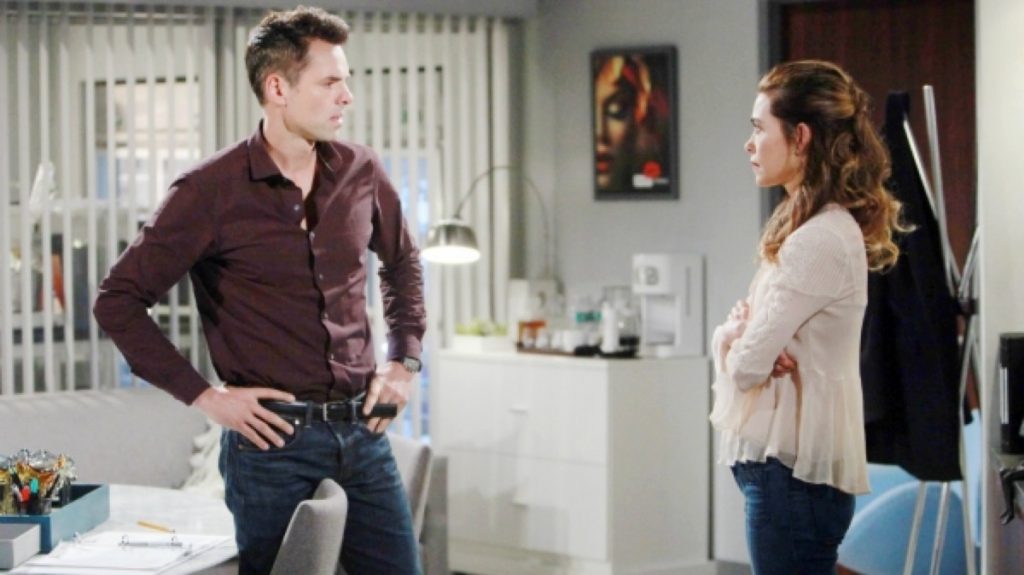 The Young and the Restless (Y&R) spoilers for Tuesday, January 21, tease that Sharon Newman (Sharon Case) will be frustrated over her cancer becoming the focus. At home, Sharon talks to Rey Rosales (Jordi Vilasuso) about her concerns. She doesn’t like the fact that Faith Newman (Alyvia Alyn Lind) isn’t returning to boarding school because of her. Sharon just feels like her diagnosis is the center of everything now.

After Rey offers reassurance, he eventually takes a work call and exits. Over at Nick Newman’s (Joshua Morrow) house, he speaks with Faith about reenrolling at Walnut Grove. Mariah Copeland (Camryn Grimes) is also on hand, so she offers to take Faith back to boarding school and help her gather her stuff.

At the ranch, Nikki Newman (Melody Thomas Scott) fills Victor Newman (Eric Braeden) in on some invitations she sent out. She’s planning a big celebration for Newman Enterprises’ 50th anniversary, but she wants this event to be more about Victor than the company.

Next, Nick and Mariah show up to speak with Victor about using the Newman jet. After Nick explains that Faith wants to be near her family and will stay in town, the news pleases her grandparents. Nikki suggests she could accompany Faith to get her belongings, but Mariah pipes up about looking forward to the sister trip.

Back at Sharon’s place, Faith’s upset about not being there for Sharon when she was getting sick. Sharon doesn’t want Faith blaming herself for anything. She doesn’t think Faith should have any regrets and intends to fight this cancer.

Later, Mariah and Faith say their goodbyes before their overnight adventure. Once they’re gone, Sharon opens up to Nick about how she’s feeling. She wishes she could take away Faith’s worries, but everything is beyond her control.

Nick ultimately gives Sharon a gift from Faith. It’s a necklace that Faith convinced her dad to go out shopping for. Sharon’s moved as she looks at three charms, which feature the words “love,” “hope” and “faith.”

Over with Victor and Nikki again, they discuss Victoria Newman’s (Amelia Heinle) relationship problems. Victor feels Billy Abbott (Jason Thompson) is nothing but trouble. At home, Billy pressures Victoria to talk. She determines that they’ll get it all out in the open and rants about Amanda Sinclair (Mishael Morgan). It was hurtful for Victoria to confide in Amanda instead of her.

Victoria thinks it’s time for Billy to return to therapy and get back on track. Billy denies that he’s off track and just wants an opportunity to prove it. Victoria can’t take that leap of faith again – not after she’s been burned so many times.

‘The Young and the Restless’ Spoilers: Phyllis Seeking A Chance While Abby Recognizes Her New Enemy https://t.co/zsxNuPl2ew pic.twitter.com/xsoJwwbVC8

Billy wants Victoria to accept him the way she accepts Victor, but she thinks that’s a completely different situation. Billy is Victoria’s partner, not her father. Victoria contends that Billy has to get the help he needs or else they’re not going to make it.

At Crimson Lights, Nate Hastings (Sean Dominic) speaks with Elena Dawson (Brytni Sarpy) about some mobile medical unit plans. Amanda walks in, so Elena encourages her to join them. After they all chat about New Hope briefly, Elena has to take off. That leaves Amanda to get updates on how Nate’s related to Devon and make an assumption about his connection to Elena.

Amanda figured Nate and Elena must’ve dated, but Nate insists that isn’t the case. They’re just friends and colleagues. Amanda drops the matter since Nate wouldn’t make a move even if he were interested. Nate confirms that’s true. He disapproves of pursuing someone in a relationship and doesn’t think anyone with a moral code would cross that line. Amanda looks pensive over the comment.

At Society, Elena bumps into Rey and answers his cancer questions. Rey admits he knows someone who was recently diagnosed. Elena touts the benefits of staying optimistic and having a good support system. She advises Rey to remember that his loved one is more than a diagnosis.

The Young and the Restless spoilers say another action-packed episode’s in store. We’ll keep you posted as other Y&R details and rumors emerge. Stay tuned to see what else is ahead in Genoa City.