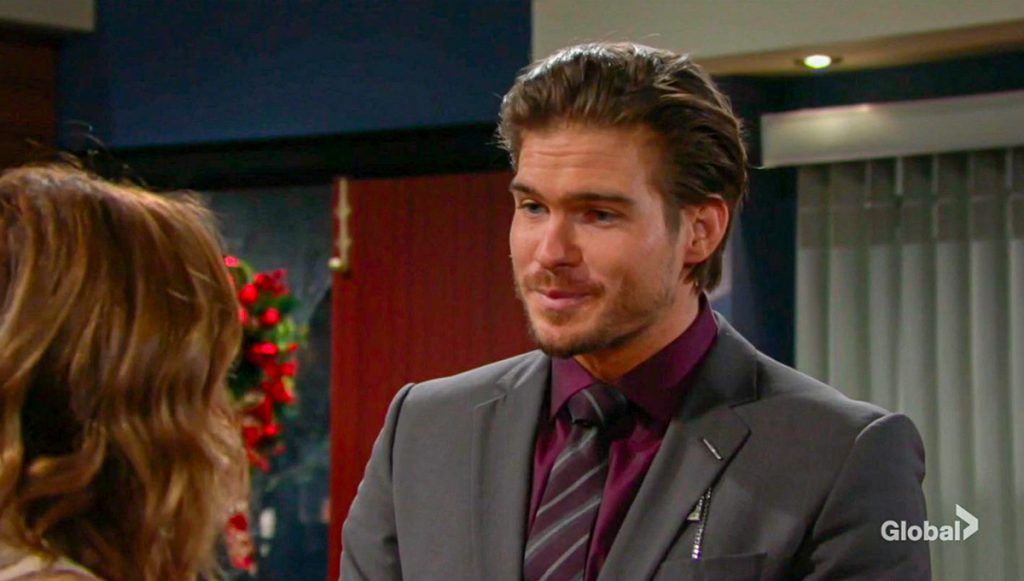 The Young and the Restless (Y&R) spoilers for Thursday, January 2, teases that some New Year’s Eve parties will get underway. At Society, Abby Newman (Melissa Ordway) insists this is neutral territory for the night. The guests arrive and begin to chat, but it isn’t long until Phyllis Summers (Michelle Stafford) stirs up trouble.

Phyllis gripes to Chelsea Lawson (Melissa Claire Egan) about their numbers at the Grand Phoenix before the conversation shifts to Adam Newman (Mark Grossman). She feels like Chelsea’s stringing Nick Newman (Joshua Morrow) along and doesn’t think Chelsea did enough to shut Adam down.

Afterward, Summer Newman (Hunter King) corners Phyllis and worries she’s doing this as justification for her pursuit of Nick. Phyllis dismisses the idea and assures Summer she’s not looking to get involved with anybody – but she looks at “Chance” Chancellor (Donny Boaz). A little later, Phyllis needles Chance about whether Abby knows what happened in Vegas. She points out that unlike Abby, she can keep a secret when she wants to.

Meanwhile, Victor Newman (Eric Braeden) speaks to Adam about his resolution this year – to keep better track of his meds! However, Victor’s pleased that he’s still standing and Adam’s watching out for Connor Newman (Judah Mackey). Speaking of Connor, Nikki Newman (Melody Thomas Scott) has some surprising updates for Adam. She explains that she talked the principal into letting Connor stay at Walnut Grove.

Back with Nick, he’s glum about Chelsea slipping away. Nick tells Jack Abbott (Peter Bergman) that the writing was on the wall, but he refused to see it. He thinks Chelsea may be with him because he’s safe and dependable – in other words, all the wrong reasons.

Nick shares a private moment with Chelsea and notes that he has to let her go. He thinks if Chelsea’s honest with herself and with him, she knows she needs to be with Adam. Chelsea’s grateful for everything and lets Nick know he’s a wonderful man. They kiss and hug goodbye as Adam glares nearby.

Adam heads back to the penthouse, where Chelsea eventually appears. They lock eyes and take each other’s hands tenderly before watching the fireworks. At Society again, Victoria Newman (Amelia Heinle) is concerned about Billy Abbott (Jason Thompson) backsliding. Nikki contends that Victoria should convince Billy to attend a meeting.

At the dive bar, Billy tells Amanda Sinclair (Mishael Morgan) that he feels relieved. It’s like he can be himself when he’s with Amanda. She echoes the sentiment and recalls feeling free back in high school. Billy understands Amanda’s perspective about having to buckle down. He reflects on feeling alive since he made the decision to leave Jabot.

Amanda wants to stop feeling like she has to be so in control. It’s time for Billy to head out, but he mentions that Amanda has his number and contact him if she needs anything. At Society, Victor proposes a toast and receives one from Jack, who thinks they should raise a glass to Victor and Nikki’s anniversary. Victoria still looks nervous as she checks her phone and waits for Billy.

As for Theo Vanderway (Tyler Johnson), he flirts with Lola Abbott (Sasha Calle) about her empanadas and wants to dance. Summer nixes that plan and pulls Theo to dance with her instead. She wonders what Theo thinks he’s doing, so he replies that he’s setting his intentions. Theo feels like it’s all about reaffirming goals and getting rid of whatever’s in the way. Summer looks rattled by what sounds like a veiled threat against Kyle Abbott (Michael Mealor).

The Young and the Restless Poll: Who Is Chelsea's Better Option – Nick Or Adam? @celebratesoaps #YR #youngandrestless https://t.co/9VLCsWYxdW

After singing a song, Tessa gets a kiss from Mariah. Midnight eventually draws near, which brings a text from a platinum recording artist named Tanner Watts (Chase Coleman). Mariah thinks this is great news, but Tessa seems unnerved.

As midnight strikes at Society, Billy arrives in the nick of time. He plants a kiss on Victoria, and Victor kisses Nikki as well. Abby and Chance also lock lips to cap off the year, but Nick and Summer have to settle for a father-daughter hug. Despite this sad and lonely night for them, Summer’s hopeful that 2020 will be their best year ever.

The Young and the Restless spoilers say some hot drama’s ahead, so don’t miss what’s in store. We’ll keep you posted as other Y&R details and rumors emerge. Stay tuned to see what else is brewing in Genoa City.

The Young and the Restless Spoilers: Billy’s Identity Crisis, Chelsea Puts Things Into Perspective With Adam