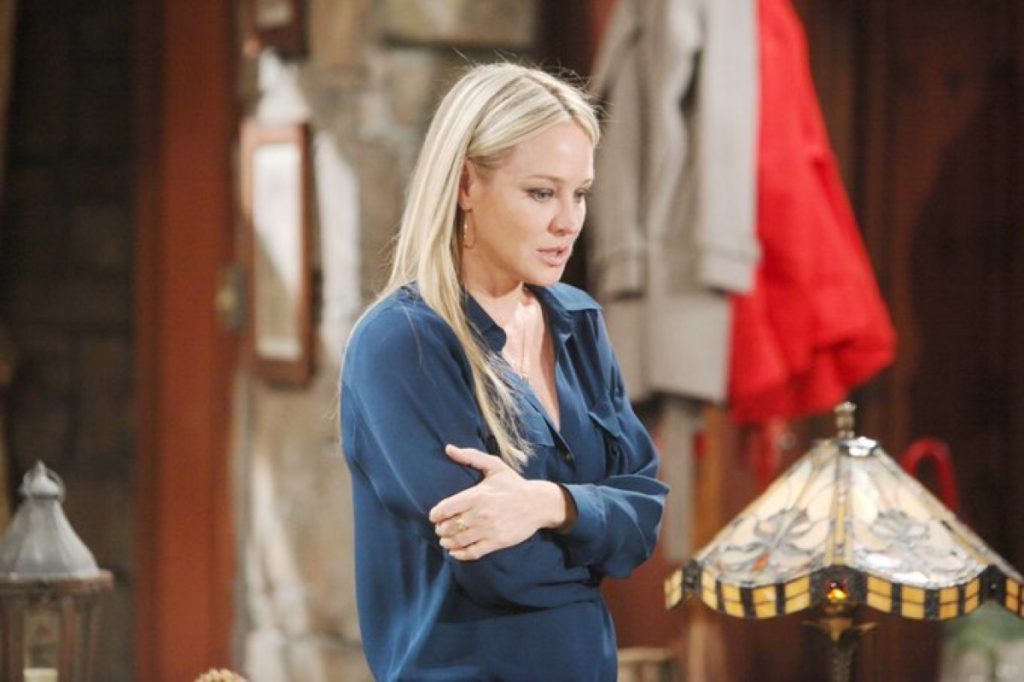 The Young and the Restless (Y&R) spoilers for Tuesday, January 14, tease that Lily Winters (Christel Khalil) will be back in Genoa City. At Crimson Lights, Lily sits with Jill Abbott (Jess Walton) and speaks with Sharon Newman (Sharon Case) briefly. After Sharon walks away, Jill frets about Colin Atkinson’s (Tristan Rogers) scam. Lily promises that nobody blames Jill for Colin’s actions.

Cane Ashby (Daniel Goddard) is in Europe, where the twins are visiting, so Jill thinks maybe Lily could join them. Lily passes on the idea and admits she’s started dating again. Back with Sharon, she talks to Rey Rosales (Jordi Vilasuso) about his Miami trip suggestion. Sharon would need to talk to Nick Newman (Joshua Morrow) and Faith Newman (Alyvia Alyn Lind) about it first.

The Young and The Restless Weekly Spoilers Jan 13-17: Sharon Faces Her Biggest Challenge Yet – How Will Her Family React?

Afterward, Sharon checks her phone and sees that she didn’t get the call she’s waiting on yet. Once Sharon arrives home, that call indeed comes in. Sharon asks about her biopsy results before Rey appears. She eventually confesses that there’s something she needs to tell him.

At Society, Mariah Copeland (Camryn Grimes) talks to Devon Hamilton (Bryton James) about not feeling like a very supportive girlfriend. Devon questions if Mariah’s worried about Tessa Porter (Cait Fairbanks) being on tour with her ex-husband, but Mariah insists that’s not the case. She just misses Tessa, and Devon thinks Tessa must miss Mariah, too.

On Tanner Watts’ (Chase Coleman) jet, he goes over Tessa’s setlist with her and offers some tweaks. Tanner wants Tessa to make sure she has fun. When Tessa acknowledges that she sometimes forgets Tanner’s a superstar, he notes that he appreciates that. Tanner wants someone around who will kick him in the pants if his ego gets too big.

When Tanner mentions Tessa’s necklace, she tells him it was a gift from Mariah. Tessa talks about all the times she’s screwed things up, but she feels they’re in a good place now. Tanner says the trick is keeping things that way. He suggests people can get bored and lonely, which can lead to slipups. Tessa insists not her.

After Tessa and Tanner exchange advice about some songs they’re working on, the plane lands and Tessa takes a call from Mariah. She fills Mariah in on how the experience has been so far, and they express how much they miss each other.

The Young and The Restless Weekly Spoilers Jan 13-17: Sharon Faces Her Biggest Challenge Yet – How Will Her Family React? https://t.co/sjTyZCmRVj pic.twitter.com/IaaLH5hrNj

Back with Lily, she stops by the penthouse and gets caught up on everything happening in Devon’s world. When it comes to the topic of Colin, Cane, and the investigation, Lily feels like Devon is clamming up. She doesn’t think Devon wants to speak with her about it because of his suspicions about Cane.

Lily wonders how Devon will handle this if Cane was in on the scam. Devon thinks Cane would deserve prison, but Lily counters that Cane might be able to negotiate a deal with Michael Baldwin (Christian LeBlanc). However, Devon isn’t interested in giving Cane any more chances. He doesn’t plan to show mercy if Cane and Amanda Sinclair (Mishael Morgan) have been lying about all this.

At Newman Enterprises, Nikki Newman (Melody Thomas Scott) gets the scoop on Billy Abbott (Jason Thompson) quitting therapy. Victoria Newman (Amelia Heinle) is concerned about Billy focusing on his wild side. Nikki can see Victoria’s view, but she can see Billy’s as well. She feels like Victoria should concentrate on her own needs. Victoria frets over what else Billy might be keeping from her.

At the Grand Phoenix, Amanda tells Billy about some work-life drama. She feels like clients are rejecting her because they don’t want to offend Devon. Billy gets what it’s like to be judged. He brings up Victoria and how he’s been struggling to open up to her. Billy thinks maybe he overpromised when he said he’d be Victoria’s rock. He nixes Amanda’s suggestion of sharing his feelings with Victoria and letting her down.

Amanda doesn’t believe Billy’s broken or in need of fixing. Billy’s grateful to her for saying so and gives her a kiss on the cheek as he leaves. At home, Victoria confronts Billy about a receipt she found for the dive bar – one for two drinks. Billy lies about meeting up with a guy for work there, but Victoria seems suspicious.

The Young and the Restless spoilers say some hot drama’s on the way, so don’t miss all the action. We’ll give you updates as other Y&R news and rumors emerge. Stay tuned to see what else is brewing on the CBS soap.