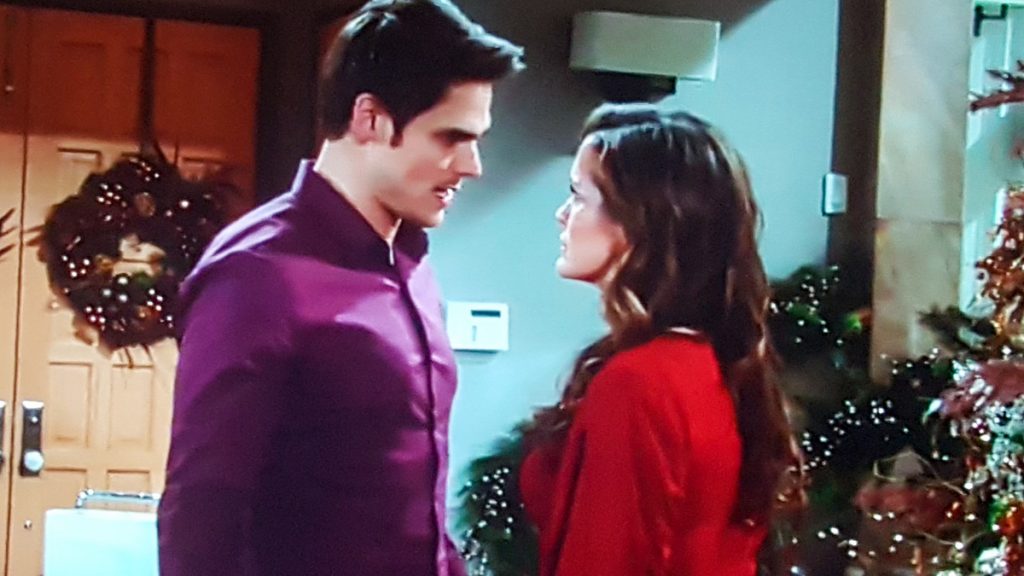 The Young and the Restless (Y&R) spoilers for Wednesday, January 1, tease that Nick Newman (Joshua Morrow) is in for a shock. At home, Nick investigates a noise while armed with a baseball bat. He’s greeted by Chelsea Lawson (Melissa Claire Egan), who’s behind the bar with balloons, a party hat and birthday muffins. She’s also got a framed photo of the boys as a gift and another one that represents their future.

Nick makes a secret wish as he blows out his candle, but Chelsea assumes it’s for Adam Newman (Mark Grossman) to get out of their lives. They start bickering over Chelsea’s living arrangement again, but she’s adamant that she’s at the penthouse for Connor Newman (Judah Mackey). Chelsea admits Adam still loves her, and Nick notes that Adam’s winning at keeping them apart. However, Chelsea pushes for Nick’s support and vows to meet up with him at Society later.

At the Grand Phoenix, Phyllis Summers (Michelle Stafford) trades barbs with Adam, who’s pleased by how things went down about the scheme spillage. Phyllis thinks Adam is obsessed with Chelsea, but she denies her own interest in Nick. Adam suggests it’s just easier for Phyllis to give up since Nick doesn’t love her back.

Phyllis mocks Adam for going back and forth between Sharon Newman (Sharon Case) and Chelsea. She steers the conversation to herself and insists this is going to be her year. Phyllis feels confident everything will change. At the coffeehouse, Summer Newman (Hunter King) and Faith Newman (Alyvia Alyn Lind) have more muffins for Nick. They joke around with him before Phyllis arrives.

Phyllis gets invited to Abby Newman’s (Melissa Ordway) gathering by Summer, but she’s not interested. Afterward, Phyllis gives Nick his present in a private moment. Nick’s thrilled over the Brewers tickets and appreciates Phyllis’ friendship.

Back with Chelsea, she heads to Adam’s penthouse and sees all the stuff he bought for Oliver the kitten. Adam also shows off Connor’s drawing of his family, but Chelsea doesn’t want to give their son false hope. An annoyed Adam thinks Chelsea’s scared to admit she loves him. He pulls Chelsea in for a kiss before she pulls away. Chelsea advises Adam not to crash the New Year’s Eve party, but he notes that he was invited and will be there.

Meanwhile, Devon Hamilton (Bryton James) and Elena Dawson (Brytni Sarpy) discuss their London trip, which was postponed due to the baby discovered on the Newman ranch. Elena eventually gets a text from Nikki Newman (Melody Thomas Scott) and relays that Sasha’s moving into a new apartment with Joy. After Elena mentions donating some things, she praises Devon’s involvement in New Hope.

“Chance” Chancellor (Donny Boaz) shows up later and offers to work for Devon privately on this Colin Atkinson (Tristan Rogers) mission. After Elena checks her he forgotten phone, she sees that Sasha needs help with the baby. Devon and Elena end up at the hospital with Sasha, who’s reassured by Devon about medical bills being paid. He also feels certain Joy’s going to be fine.

Young And The Restless Spoilers: Who Is The Best Villain Of 2019? Vote! @celebratesoaps https://t.co/JIBZCm3vq4

Elena ultimately comes out and explains that the baby’s fever has gone down. Sasha expresses her deep gratitude over the miracle she needed. As for Chance, he’s spotted by Phyllis at Crimson Lights. Chance hopes Phyllis’ resolution this year is to stop all the Vegas pestering, but she replies that there’s not a chance! Phyllis also flirts a bit by suggesting that Chance’s resolution must not involve the gym. He’s already quite fit. Once Chance confesses he’s going to be at Abby’s party, Phyllis insists she’ll be there as well.

At home, Billy Abbott (Jason Thompson) tells Victoria Newman (Amelia Heinle) that she’ll have to ring in the new year without him. Victoria’s disappointed to hear that Billy has to work, but he vows to try and make it for a kiss at midnight. Talk turns to when Victoria saved Billy on New Year’s – and she assures Billy she’d do it again. Billy thinks to himself and doesn’t like the fact that Victoria views him as a man who needs saving.

Victoria’s concerned when Billy wonders what if who he was is who he is. She grills Billy to find out if he’s gambling again, but his issues are bigger. Billy’s looking for more out of life – things like more time, freedom, excitement and happiness. Victoria thinks Billy can be fixed, but he seems glum as they share a hug.

Billy tells Victoria he’s heading off to meet an executive, but he winds up texting Amanda Sinclair (Mishael Morgan). He hopes Amanda can join him to talk. The Young and the Restless spoilers say Billy and Amanda are inching into dangerous territory, so it’ll be interesting to see how far they go! We’ll give you updates as other Y&R news and rumors emerge. Stay tuned to see what else is brewing in Genoa City.

General Hospital Spoilers: Tracy Quartermaine Is Back And Ready To Clean House – What Does This Mean For Brook Lynn?