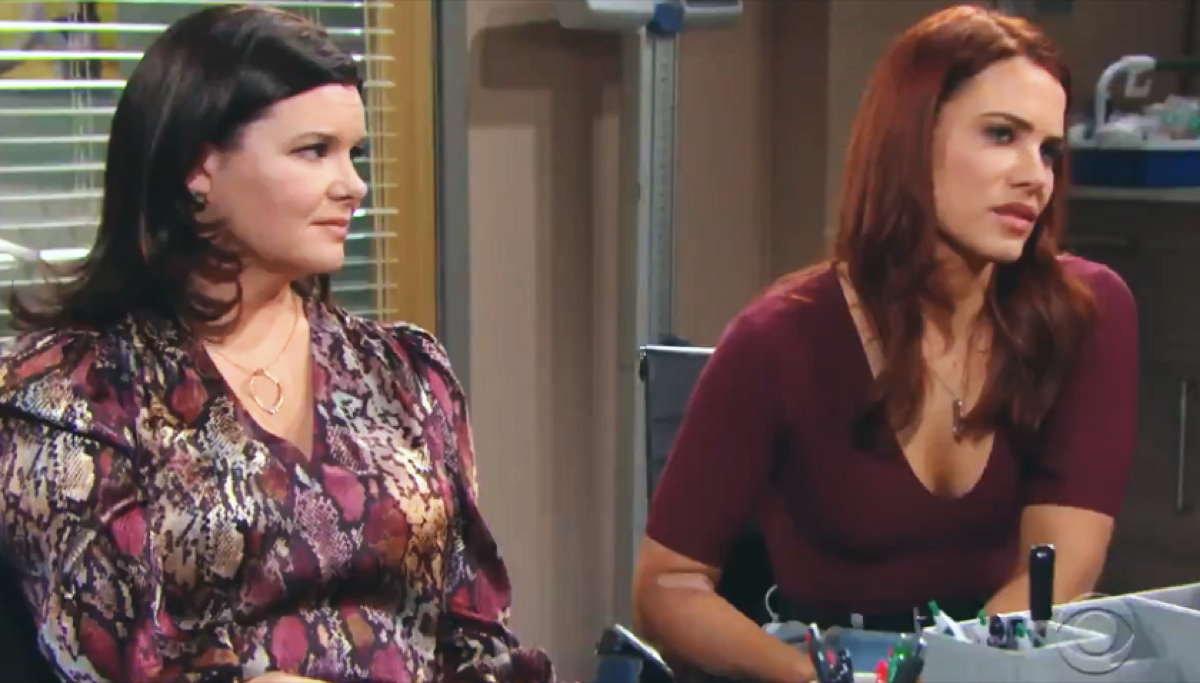 The Bold and the Beautiful spoilers for Tuesday, February 25, tease that Katie Logan (Heather Tom) will find herself on a new mission. As B&B viewers know, Katie is well-aware of Sally Spectra’s (Courtney Hope) terminal condition.

She’s been by Sally’s side throughout her ordeal, and that’s a good thing since Sally doesn’t want anyone else to know about her illness.

Well, on Tuesday’s episode of B&B, Katie will concern herself with Sally’s job at Forrester Creations. As B&B viewers know, Sally’s work has suffered greatly since her symptoms became noticeable. Her hands have been shaking so badly that she has difficulty sketching and designing. And that has left her job in jeopardy.

In fact, both Steffy Forrester (Jacqueline MacInnes Wood) and Ridge Forrester (Thorsten Kaye) have noticed that the quality of Sally’s work product has suffered lately. Ridge even made it sound like Sally’s job was in jeopardy, which has Sally really worried.

Well, Katie knows all about Sally’s job woes, so on Tuesday’s episode of B&B she’ll go to see Ridge and Steffy, and she’ll disclose to them Sally’s condition and the terrible reason why her job performance has been slipping lately. Ridge and Steffy will surely be shocked by this terrible development, and once they’ve processed it fully, they’ll decide that they want to do something to help Sally out.

According to ongoing B&B spoilers, Ridge will end up taking Sally’s designs and tweaking them a bit so that they can be used in the Forrester couture collection. That’s bound to take Sally by surprise, especially since she was banking on being fired. It will be a nice gesture for Sally, and will give her something positive to focus on.

Meanwhile, on Tuesday’s new episode of B&B, Wyatt Spencer (Darin Brooks) and Flo Fulton (Katrina Bowden) will reach some decisions. As B&B viewers know, they both want to help Sally out as well, but will go about helping her in a very different way than Katie will.

According to B&B spoilers, Wyatt and Flo will put a plan together that they hope will allow Sally to live out the rest of her life in peace and with some real happiness. They know that all Sally really wants is to get back together with Wyatt, and so they’ll decide to make that happen.

Of course, that will mean that they’ll need to put their own plan to be together on hold so that Sally can have Wyatt, but they’ll be sure that it’s the right thing to do. It will be a little tricky, though, since Sally doesn’t know that Wyatt and Flo know about her terminal illness. Wyatt will need to convince Sally that he wants her back without telling her that he knows about her condition.

Sally only has a month left to live, so Flo and Wyatt feel that they can put their own lives on hold in order to give Sally something really special. Flo will insist that Wyatt do this for Sally, and so they’ll plan to go their separate ways for now, so that Sally can live out her final days with the man she loves.