General Hospital Recap Monday, February 24: Michael has his son back – Nikolas and Elizabeth have a serious chat

Welcome to your Monday, February 24th General Hospital (GH) recap! We begin our day at General Hospital where Nikolas Cassadine (Marcus Coloma) runs into his wife Ava Jerome (Maura West) and asks if shes following him?

She says no but she treasures every moment they are apart. Nikolas sees Elizabeth a Webber (Rebecca Herbst) and says he needs her help. 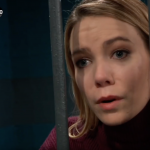 At Willow Tait (Katelynn Macmullen) and Harrison Chase’s (Josh Swickard) apartment, he says good morning loudly, which startles her. Chase is surprised that Willow is going to work and she says she needs to work or she will cry all day.

At the Port Charles jail, Brad Cooper (Parry Shen) is visited by Julian Jerome (William DeVry) who says Wiley is good. Julian says he has not heard from Lucas and thanks to Brad for not blowing his cover. Brad says he still could do exactly that.

In the Corinthos kitchen, Carly Corinthos (Laura Wright) walks in and asks Jason Morgan (Steve Burton) if he was ever going to mention the explosion. Jason changes the topic to Michael and Sonny Corinthos (Maurice Bernard) says Brad and Nelle will pay for what they did.

Carly says she is overjoyed about Michael but is so sad her brother lost his child. Carly is livid about Nelle and thinks they should retaliate.

At the Quartermaine mansion, Michael Corinthos (Chad Duell) is playing with his son Wiley and tells him how much he loves him. Monica Quartermaine (Leslie Charleson) walks into the living room and is surprised to see baby Wiley. Michael gives her the good news that the baby is actually his. Monica is ecstatic that there is another Quartermaine in the family.

At General Hospital (GH) Nikolas Cassadine (Marcus Coloma) tells Elizabeth Webber (Rebecca Herbst) that his son Spencer won’t return his calls. Nikolas says that Spencer considers him to still be dead and Liz tells him not to give up hope.

Elizabeth updates Nikolas about Franco supposedly being Kiki’s father but it was proven wrong. Nikolas tells Elizabeth that he hopes they can be friends again.

In the GH hallway, Ava Jerome (Maura West) is eavesdropping on Nikolas’s conversation when Franco Baldwin (Roger Howarth) approaches. They go back to his art studio where he’s going to paint an official portrait for her.

Brad Cooper (Parry Shen) tells Julian Jerome (William DeVry) to drop the act, he’s only visiting to cover his own ass. Julian tells him that he is the whole reason the plan fell apart. Brad says he wanted to be honest with his husband and now everything is a mess.

GH Spoilers – Willow Tait struggles after the news of her baby’s death.

At the apartment, Willow can’t find her ID badge and is getting angry. Chase says that they need to talk and he’s worried about her state of mind. Willow says all she wants to do is scream and Chase says he is with her and they can be angry together as she storms off.

Ava sounds jealous when she finds out that Nikolas and Elizabeth had an affair many years ago. Willow goes to the grave where Jonas is and cries while saying goodbye.

Monica insists on a selfie with the 4 generations of Quartermaines.

Elizabeth finds Willow at the grave and comforts her.

Sonny tells Carly that she needs to stay out of the business between Michael and Nelle……..flash to preview