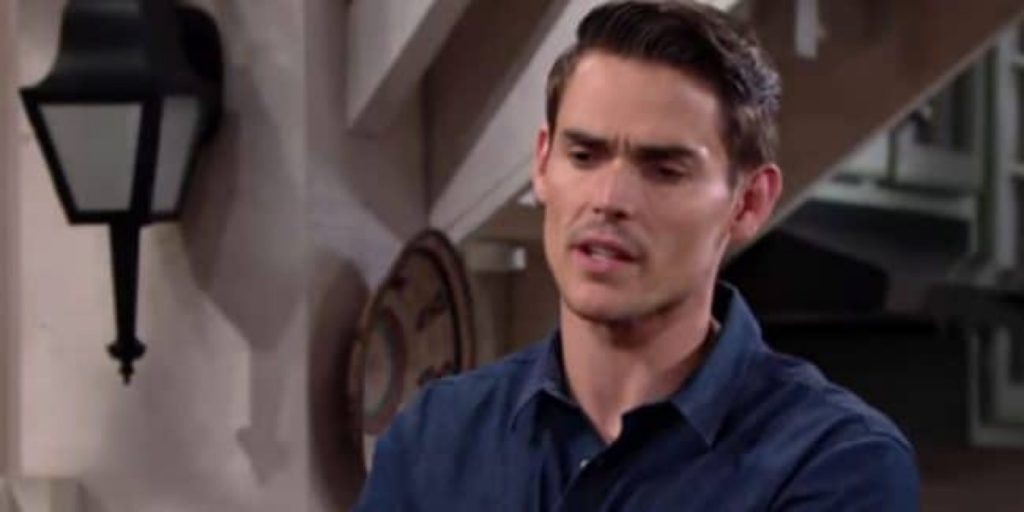 The Young and the Restless (Y&R) spoilers for Monday, February 24, tease that Billy Abbott (Jason Thompson) will continue to fret over comatose Victoria Newman (Amelia Heinle).

At the Grand Phoenix, Billy peruses the news before getting in touch with Chelsea Lawson (Melissa Claire Egan). There are no updates to deliver and Chelsea still thinks Billy needs to steer clear of the hospital.

After Phyllis gets off the phone with Summer Newman (Hunter King), she speaks with Billy about Amanda Sinclair (Mishael Morgan). Billy says he spent the night on Amanda’s sofa, but he has to head where he’s needed most.

Back with Chelsea, she talks to Adam Newman (Mark Grossman) at Society. He mentions the disconnect he felt from his family at the hospital, but Chelsea knows he cares. Adam’s thinking about offering his help, so Chelsea presumes this involves a return to Newman Enterprises. She warns it might seem opportunistic, but Adam points out that Victor Newman (Eric Braden) will have to handle all this fast.

At the hospital, most of the other Newmans are still gathered in the waiting area. Nikki Newman (Melody Thomas Scott) reflects on visiting Victoria’s bedside; her daughter’s fighting for her life. Victor booms about Billy, but Jack Abbott (Peter Bergman) and Abby Newman (Melissa Ordway) think it’s better to concentrate on the real perp. Jack’s certain Ripley Turner (Christian Keyes) will be captured.

Y&R Spoilers – Victor Newman To Resume His Duties At Newman

Victor has to go take care of something, so Nikki guesses Victor’s going to resume his duties at Newman. She gets emotional over this nightmare before Nick answers his phone. He asks the person on the other end how someone seemed. We later learn Nick’s agreed to let Billy speak with the kids at the ranch.

Mariah explains she hasn’t divulged that info out of fear that Tessa would bail on the tour. However, Mariah feels Sharon’s right and resolves to tell Tessa what’s going on. Nick reaches out to Sharon on the phone and informs her of Billy’s visit to the ranch. Security will be on hand to let Billy in, but Nick would appreciate it if Sharon would go over to the main house, too.

At the hospital, Nick convinces Noah to head back to London and focus on his career for now. Noah can return for Sharon’s surgery. He bids farewell to the Newman clan before popping in the cottage to say goodbye to Sharon and Mariah. Next, Phyllis brings coffee and extends more support to Nick. He mentions Reed Hellstrom’s (Tristan Lake Leabu) trip home and is grateful for Phyllis’ help.

Adam finds his father later and is eager to help as well, so he whips out his phone and watches some basketball with Victor. It’s the perfect distraction right now. At the ranch, Johnny Abbott (Holden and Ryan Hare) and Katie Abbott (Sienna Mercuri) learn Mommy’s been hurt and is sleeping. Billy fills them in and hopes they can all be with her later.

Sharon arrives and eventually sends the kids off to get ready for the stables. Billy isn’t keen on talking much when Sharon tries to. Back at the Grand Phoenix, Chelsea and Abby reflect on this horrible Victoria crisis. If Billy’s cheating caused this, Abby doesn’t feel like she’ll ever be able to forgive him.

Talk turns to the hotel, which has never truly been Chelsea’s dream. She thinks Abby had better make sure it’s her own dream since Phyllis will go hard. Chelsea contends that Phyllis is prepared to fight to the death.

At Society, Mariah is surprised when Tanner Watts (Chase Coleman) answers Tessa’s phone. He explains that he saw Mariah’s name pop and didn’t want her to get Tessa’s voicemail. Mariah asks where Tessa is and learns she’s in the shower. Tanner adds that they’ll be doing soundcheck soon, so it may be a while before Tessa can call back. He assures Mariah that he’ll let Tessa know she called.

Mariah texts Tessa afterward and says she’s sorry she missed her. She seems unsettled by her interaction with Tanner as she sits deep in thought. The Young and the Restless spoilers say some hot drama’s on the way. We’ll keep you posted as other Y&R details emerge. Stay tuned to see what else is looming in Genoa City.

The Bold and The Beautiful Spoilers: Brooke Makes A Deal With Ridge About Thomas, Will It Save ‘Bridge’ ?