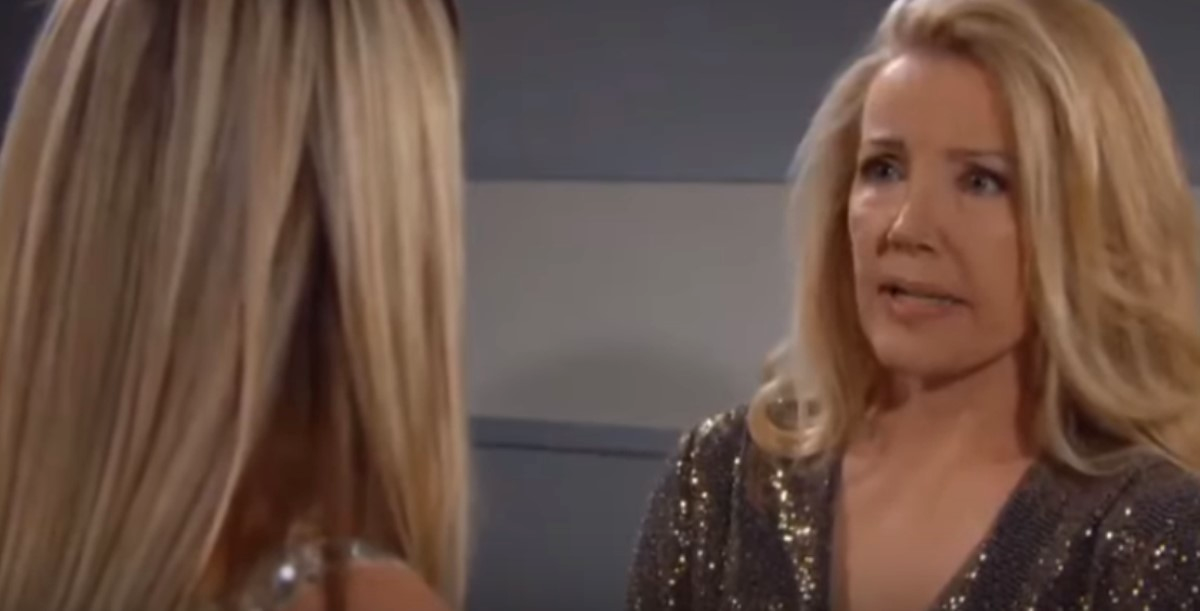 The Young and the Restless (Y&R) spoilers for Tuesday, February 18, tease that Phyllis Summers (Michelle Stafford) will back Chelsea Lawson (Melissa Claire Egan) into a corner. At the Grand Phoenix, Chelsea downplays the drama and assures Phyllis no one is going to jail. Phyllis thinks Chelsea should tell that to the woman whose husband has gone missing.

After Phyllis brings Chelsea up to speed on what she knows about Vegas, she insists she wants Chelsea’s 25 percent stake in the hotel. Chelsea meets with Adam in a suit soon after. She wants the truth about Vegas and learns that Phyllis’ claims are accurate. Chelsea isn’t one to talk when it comes to deception. She kept secrets about Simon Black (Jeffrey Vincent Parise), so she can’t really get angry now.

Adam suggests he can handle Phyllis himself, but Chelsea thinks she can deal with her. Over with Abby Newman (Melissa Ordway), she gets a sweet gift from Chance Chancellor (Donny Boaz). It’s a Grand Phoenix plaque. Afterward, Chelsea calls Abby up to let her know she’s selling the shares to Phyllis. It doesn’t take Abby long to figure out there’s dirt involved. She wonders if this is tied to Adam.

Chelsea doesn’t reveal any more details, but she does think Abby should bring Phyllis down if the opportunity arises. Back in the lounge, Chance hears Abby confront Phyllis about the shares and the blackmail. She wants to know what Phyllis has on Chelsea and insists she’s going to speak with her lawyer.

Abby storms out, so Chance makes his way over to Phyllis next. She admits this is about what Chance and Spider did in Vegas. Phyllis eventually makes another admission: She wants all of the Grand Phoenix, not just half.

At the Newman ranch, Nick Newman (Joshua Morrow) speaks with Victor Newman (Eric Braeden) about Nikki Newman’s (Melody Thomas Scott) return home. Her plane has landed and Victoria Newman (Eric Braeden) is going to bring her home. Victor mentions Sharon Newman’s (Sharon Case) treatment and explains that he knows about her breast cancer. He worries about Nick and Faith Newman (Alyvia Alyn Lind) before assuring Nick that he’s there for him.

Y&R Spoilers – Victor Newman Wants A Hint About The Surprise

Next, Victoria and Nikki walk in. Victor wants a hint about what Nikki’s cooked up, but Victoria only reveals that her mother’s really gone all out. At the cottage, Sharon receives Traci Abbott’s (Beth Maitland) book as a present from Rey Rosales (Sasha Calle). He thinks it’ll serve as a nice distraction during chemo. Rey even suggests he can read it to Sharon and do all the characters’ voices.

A little later, Sharon grumbles about how boring it is to sit there for chemo. She feels fine, so she wants to head over to the Newman Enterprises party. Once Sharon arrives with Rey, they settle on “Phyllis” as the code word in case she wants to leave immediately. Sharon ends up in the ladies’ room soon after and battles some nausea. She gets caught by Nikki, who wonders if Sharon might be pregnant.

The idea gives Sharon a good laugh before she shuts it down. Sharon mentions eating a shrimp appetizer and snarks about Nikki’s catering before she exits. Back with Nick and Rey, they get updates on Nikki’s pregnancy suspicions from Sharon and are caught off guard.

Phyllis also shows up, which certainly doesn’t please Abby or Chelsea. Abby takes her chance to confront Phyllis, who claims they’re like family now that they’re full partners. It’s ultimately time to get this party started, so Victor welcomes everyone to Newman Enterprises’ 50th-anniversary celebration. Nikki takes her turn with the mic and makes it clear they’re celebrating the man behind it as well.

The Young and the Restless spoilers say this gala will bring plenty of drama, so fans are in for some shockers. We’ll keep you posted as other Y&R news comes in. Stay tuned to see what else is brewing in Genoa City.