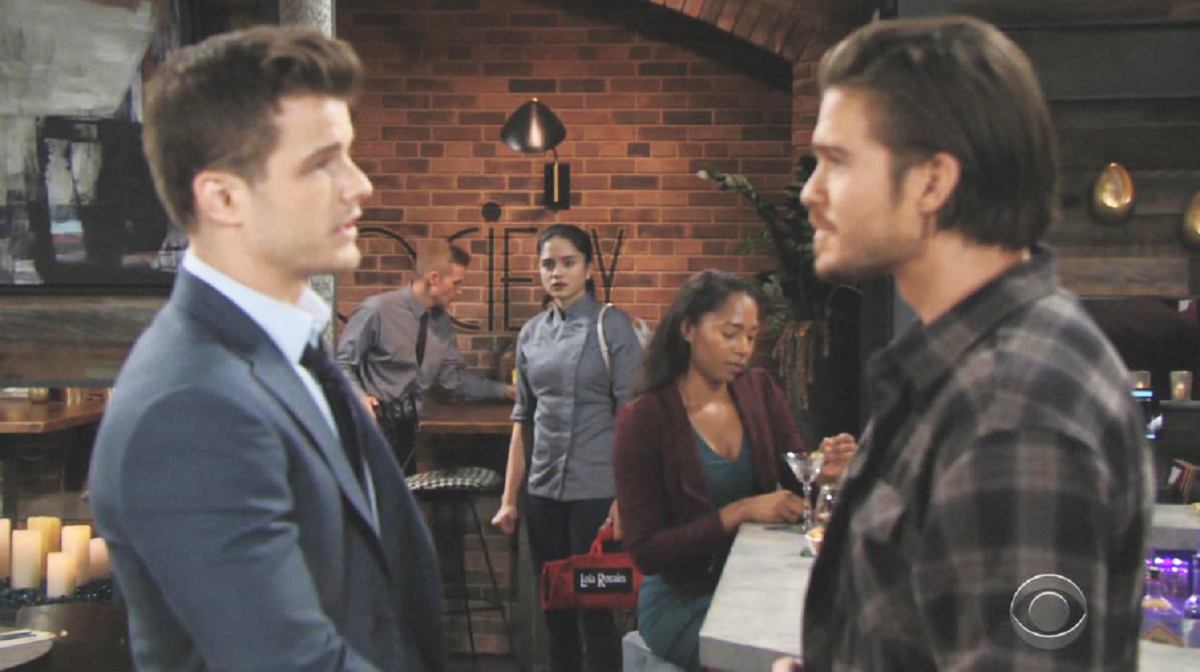 The Young and The Restless spoilers tease that Theo Vanderway (Tyler Johnson) will start needling Kyle Abbott (Michael Mealor), and another fist fight will ensue!

It’s nothing new that Theo makes Kyle bust a gasket over this time, Theo complimented Lola Abbott (Sasha Calle) in the kitchen of Society telling her she was an amazing woman and was impressed that she saved a party by moving it outside when the power was out inside, and Kyle slugged him and they started to fight in the kitchen right in front of her! Theo knows that Kyle would not be as jealous and distrustful of him and Lola if he didn’t have something to hide himself! He has broached the subject of Summer Newman (Hunter King) having baggage for Kyle, now he needles Kyle about having secret feelings for Summer and that’s why he doesn’t trust him around Lola or Lola around him, because he can’t trust himself!

The Young and the Restless: Theo Vanderway Hits A Nerve In Kyle Abbott

The Young and the Restless Spoilers: Sharon Overwhelmed But Dealing With Her Diagnosis https://t.co/KOOSqXSH6p pic.twitter.com/ArqNg51hur

Theo really hits a nerve this time, and enrages Kyle! Kyle does have some Summer-related baggage, and he doesn’t want to admit it even to himself, and he doesn’t like it that Theo can see through him! He’s afraid he’ll use it to his own advantage and tell Lola and try to swing her towards himself and away from Kyle! However, Lola only cares for Theo as a friend and a family member in an in-law way, and Theo understands this too although he does feel like the two really understand each other and connect in that way.

Kyle and Summer are getting ready to make a business trip to San Francisco together and he knows since Summer tells her department employees when she is not going to be in the Jabot offices, that Theo must know about the trip and that even makes things worse! If anything is driving Lola away from Kyle, it’s Kyle’s unwarranted jealousy and hatred for his former best friend and newly discovered cousin, Theo but he can’t see it, so he subconsciously transfers his own buried urges towards Summer to Theo and Lola! It doesn’t take a rocket scientist or even a marriage counselor to figure that out!

Will Kyle start another fist fight with Theo, maybe even at work? What will Jack Abbott (Peter Bergman) say if it gets back to him, or even worse, walks in on it? He probably knows about the fight at Society, Genoa City, Wisconsin isn’t that big of a town and he probably at least heard some gossip and besides, at the time the fight took place Jack was still outside and Theo likely walked right past him when he left, as well as Kyle when he did!

If Kyle doesn’t cool the jets of his temper and back down from his suspicions of something going on between Theo and Lola, he could even be fired by his own father! It wouldn’t be the first time an Abbott family member was either sent away to manage an overseas office or fired – it happened to Billy Abbott (Jason Thompson)!