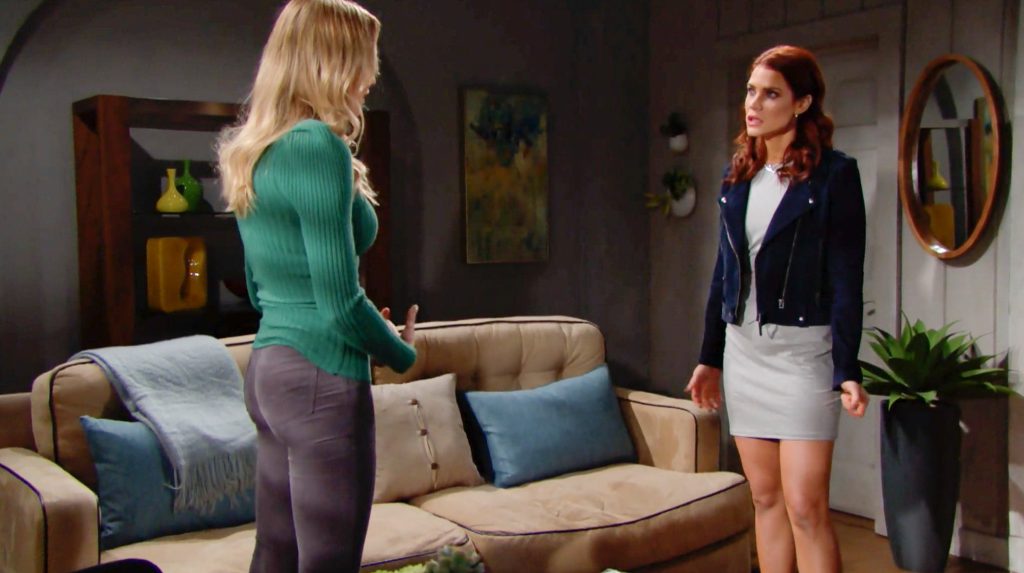 The Bold and the Beautiful (B&B) spoilers for Thursday, January 23, tease that the action is really heating up on the CBS soap. But before we get to that, we have a quick programming note. As you probably know, B&B did not air on Tuesday and Wednesday due to the impeachment hearings. Assuming that CBS gets back to regular broadcasting on Thursday, we have the scoop about what you can expect right here.

First, Steffy Forrester (Jacqueline MacInnes Wood) will be feeling seriously guilty. She’ll spend some quality time with Liam Spencer (Scott Clifton) and Kelly Spencer (Zoe Pennington) at the beach. But when it comes time for Liam to get back to the office, he and Steffy will have a conversation that will unnerve her.

The topic of their kiss out on the cliff will come up, and as B&B viewers know, that was an event that had some far-reaching consequences, since it happened right as Hope Logan (Annika Noelle) walked out to the cliff. Of course, the whole thing was set up by Thomas Forrester (Matthew Atkinson) with some help from Steffy, who kissed Liam right at the moment when Hope walked up.

The Bold and the Beautiful spoilers say that Steffy will feel terribly guilty, and that she’ll want to tell Liam about her role in Thomas’ scheme. But it seems that she won’t be able to get a word in edgewise, as Liam reassures Steffy that he doesn’t blame her for anything that happened. Once Liam’s gone, Steffy will decide that she needs to tell Liam the truth.

Meanwhile, Sally Spectra (Courtney Hope) will pay Flo Fulton (Katrina Bowden) a visit. As B&B viewers will remember, Wyatt Spencer (Darin Brooks) attempted to break up with Sally, but Sally basically told him that a breakup was unacceptable and that she wasn’t going to let him go that easily.

So, Sally will feel that she needs to set the record straight with Flo. She’ll probably tell Flo that she’s not going to just walk away from Wyatt without a fight, but it looks like Flo will turn the tables on Sally and ask her why she wants to be with someone who doesn’t want her.

But there will be more to this visit than an argument between Sally and Flo. According to B&B spoilers, Sally will have some uncontrollable physical symptoms while she’s arguing with Flo – and it looks like she’ll start shaking again, just like she did a while back when she was trying to design at Forrester Creations, and during her confrontation with Steffy and Ridge Forrester (Thorsten Kaye) about the quality of her designs.

It looks like Flo will end up very concerned about Sally, although Sally might not yet be ready to admit that there’s something very wrong with her. According to ongoing B&B spoilers, Sally will eventually seek medical attention for her symptoms, which is good, since she might have a very serious illness.

B&B Spoilers: Wyatt Spencer Gets Support From His Mom

Next, Wyatt will pay his mom Quinn Forrester (Rena Sofer) a visit to talk about his recent woes. He’s got quite a dilemma since Sally doesn’t seem to be accepting the fact that their relationship is over. It looks like he’ll tell Quinn all about the fact that he reconnected with Flo and that he wants to reignite his relationship with her and end his engagement to Sally. Of course, this will be music to Quinn’s ears. Quinn has long wanted Wyatt to be with Flo and to dump Sally, so she’ll probably be thrilled.

Finally, Thomas will finally have Hope right where he wants her, as Hope will find herself needing a friend and nowhere to turn. Of course, normally she’d turn to Liam for help with a problem, but this time Liam is the source of her problems. She’ll still be upset over their breakup and with the “Steam” kiss that she saw at the cliff house.

Hope might be a bit reluctant to let Thomas comfort her after all they’ve been through, but B&B spoilers say that she’ll accept his support and he’ll be right there to help her through this difficult time. Of course, B&B viewers know that Thomas is responsible for all of Hope’s pain in the first place, but Hope won’t know that.

So, Hope will open up to Thomas about how hurt she is over her breakup with Liam. Thomas will have to pretend that he doesn’t know anything about the scene on the cliff, although B&B viewers know that he witnessed the whole thing first-hand, as he was hiding behind a fence while the whole breakup went down.

Thomas will play Mr. Good Guy while Hope vents about everything that happened, and it looks like Hope will fall for it all. It will be a big victory for Thomas, as this is the exact outcome he wanted. He’s been working to break up Hope and Liam for months, and he’s finally gotten his way.