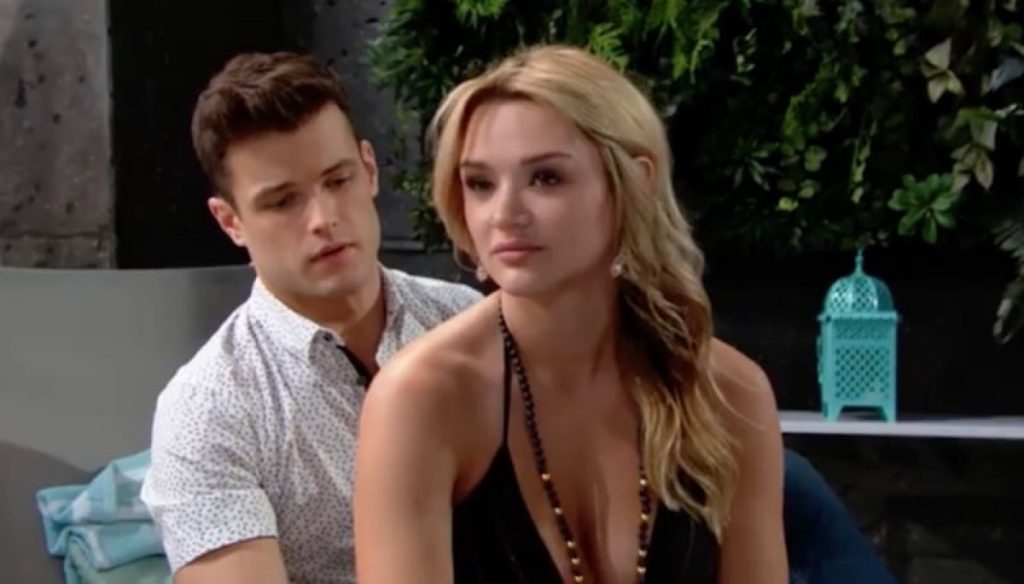 The Young and the Restless (Y&R) spoilers for Monday, January 27, tease that Theo Vanderway (Tyler Johnson) will approach Lola Abbott (Sasha Calle) and try to patch things up. At Society, Theo feels like Lola’s being distant with him. He’s sorry for causing any problems at the party. Theo doesn’t want to lose Lola since she’s his only friend right now.

Nearby, Mariah Copeland (Camryn Grimes) isn’t pleased to see Theo’s close moment with Lola. Abby Newman (Melissa Ordway) basically warns Mariah not to cause a scene. Mariah notes that she came there with another goal in mind. She wants Abby to be her party buddy after work. Mariah’s been holed up at home without Tessa Porter (Cait Fairbanks), but she still intends to have fun.

Abby learns Mariah wants to hit a club, so Abby brings up the idea of possibly taking “Chance” Chancellor (Donny Boaz) there. Mariah explains that it wouldn’t really be Chance’s thing.

By the bar, Theo goes on and on about how easy it is to open up to Lola. After Lola heads for the kitchen, Mariah confronts Theo for blatantly hitting on Kyle Abbott’s (Michael Mealor) wife. Theo pushes Mariah’s buttons about trying to hang onto Tessa, who’s becoming a star. Mariah warns Theo not to make trouble or she’ll make it for him as well.

Once Mariah revisits her conversation with Abby, they discuss Chance and how he’s intrigued by Phyllis Summers (Michelle Stafford). Mariah’s taken aback to hear Abby urged Chance to go for it if he wants. However, she quickly realizes Abby’s being smart about this. Abby’s just letting the snake eat itself.

Mariah mentions Tessa’s tour with her ex-husband, Tanner Watts (Chase Coleman). Part of her wants to hate Tanner for swooping in and taking Tessa off on this tour, but another part of her is grateful that he gave her a big break. When talk turns to Kyle and Summer Newman’s (Hunter King) work trip, Mariah’s surprised before she determines it’s not her business.

Back with Lola, she tells Theo about fighting with Kyle before he left. Even so, Lola trusts Kyle. Theo wonders if Kyle trusts Lola though. He calls Kyle entitled and points out that Kyle doesn’t know what it’s like for something to be off-limits. Theo, on the other hand, does know what that’s like.

In San Francisco, Summer and Kyle order food and get drinks from the minibar. They’re ready to celebrate their successful business deal. Kyle suggests he’ll get in touch with Lola about it later. He asks about Theo, so Summer confirms she’s moved on and is happy. She wonders if Kyle’s happy, too.

After Kyle claims he is, Summer brings up how Theo may not be the real problem in his marriage. She feels like Kyle’s using Theo to stir up a passionate response – to give him something to fight for. Summer contends that she’s watched Kyle try to change who he is for Lola, and that’s been hard.

The Young and the Restless Spoilers – Billy Is Frustrated With Victoria

Once Summer says she wants Kyle to be happy again, she plants a kiss and gets kissed back. Kyle ultimately pulls away and apologizes. He gets that there’s a lot of history and a connection between them, but he intends to work things out with Lola. Kyle makes it clear that he just wants Summer in his life as a friend.

Summer’s embarrassed and says she feels so stupid. Kyle reassures her, but Summer’s still upset as she leaves. At their favorite dive bar, Billy Abbott (Jason Thompson) brings Amanda Sinclair (Mishael Morgan) up to speed on how his conversation went with Victoria Newman (Amelia Heinle). Billy’s frustrated by Victoria’s reaction and is beginning to resent her.

Amanda blames herself on some level and eventually decides this friendship isn’t going to work for her. She doesn’t want to help Billy cross the line in his marriage. Billy asks why Amanda’s had this change of heart, but she just doesn’t feel what they’re doing is real or healthy. They wish each other luck in the future. Just before Amanda exits, someone takes pics of her with Billy.

At Victoria’s place, she talks to Nick Newman (Joshua Morrow) about her Billy issues. Nick thinks Billy has to want help – and Victoria acknowledges that if Billy doesn’t get it, she’ll have to walk away. Nick just doesn’t want his sister getting dragged down with Billy.

Victoria and Billy are indeed headed for a split, so The Young and the Restless spoilers say some hot drama’s ahead. We’ll give you updates as other Y&R news and rumors emerge. Stay tuned to see what else is brewing in Genoa City.