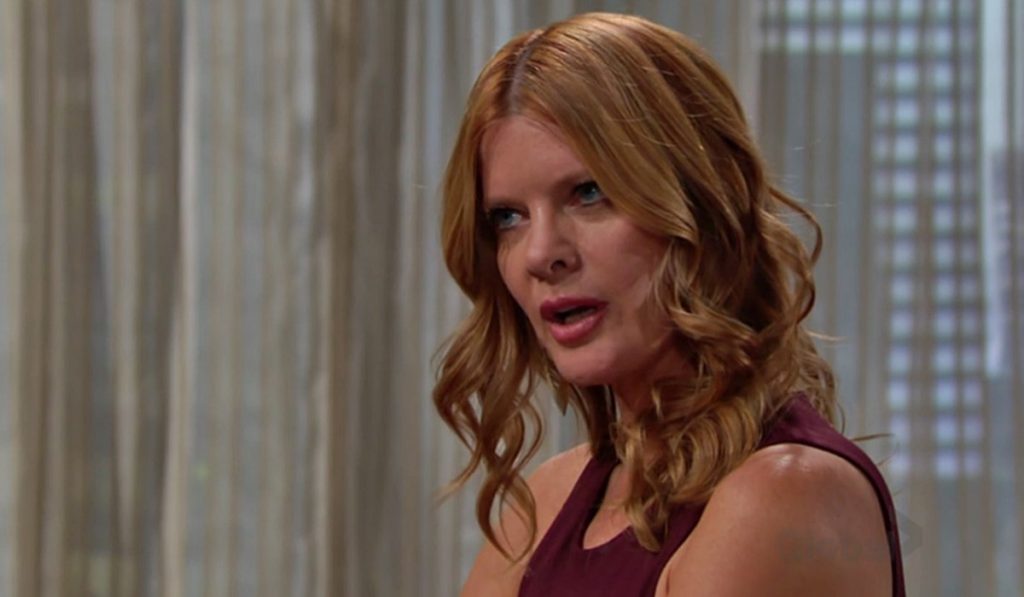 The Young and the Restless (Y&R) spoilers for Monday, January 20, tease that Abby Newman (Melissa Ordway) and “Chance” Chancellor’s (Donny Boaz) date night will be derailed. At the Grand Phoenix, Phyllis Summers (Michelle Stafford) pesters Abby about being all dressed up. Abby snaps about how Phyllis keeps the following Chance around, but she refuses to let Phyllis’ intimidation tactics get to her.

Chance eventually takes Abby out for dinner, but they return soon after due to an issue with their reservations. Phyllis takes the opportunity to snark at them before they head to Crimson Lights. Chance gets close to Abby as they dance to the jukebox.

After returning to the hotel, Chance invites Abby up to his suite for a drink. Phyllis spies them entering the elevator and quickly takes action. She’s in a robe when they come back to the lounge following the fire alarm. Chance notes that the person who pulled the alarm would have a blue dye on his or her hands. Phyllis doesn’t have any of hers. She says she hopes this didn’t spoil Chance’s night with Abby.

Later, Phyllis will remove a pair of gloves from her pocket. They’re covered in – you guessed it – blue dye. At Society, Lola Abbott (Sasha Calle) plans to prepare dinner for a Jabot business event. There’s a problem since the electricity isn’t working properly. She talks to Summer Newman (Hunter King) about it and realizes she could use her food truck. Summer decides she can make that work.

As for Kyle Abbott (Michael Mealor) and Theo Vanderway (Tyler Johnson), there’s tension as usual. Jack Abbott (Peter Bergman) wants Kyle to accept that Theo’s part of the family now. After Jack introduces Theo to Jill Abbott (Jess Walton), she tells him some stories about his grandfather. Jill notices Theo’s feud with Kyle and informs Jack that Theo’s dangerous in a good way.

After dinner’s over, Kyle’s introduced to the crowd by Jack. He thanks Summer and then Theo grudgingly. In the kitchen later, Theo gushes over Lola deserving praise. He thinks she’s an amazing woman, but Kyle appears and isn’t happy over Theo’s speech. Kyle ends punching Theo, which sends Theo hurling to the floor.

Lola gets Theo back on his feet and rips into Kyle. She wants to know what Kyle thinks he’s doing. Theo joins Summer and lets her know Kyle lost it for no reason. Although Theo doesn’t think he’s crossing lines, Summer implies that she thinks he will. She wonders how far Theo intends to take things, but Theo saunters off.

Back with Kyle, he rants about Lola not being able to see Theo’s manipulation. Kyle feels like Lola’s oblivious, but she argues that Kyle just can’t understand Theo’s point of view. After Kyle points out that Lola can understand, he stomps off.

Young and the Restless Spoilers – Tessa And Mariah Make Out

At home, Mariah Copeland (Camryn Grimes) gets a text from Tessa Porter (Cait Fairbanks). Tessa says she sent something Mariah needs to sign for. Mariah’s confused since she just tried to call Tessa, who didn’t pick up. She answers the knock at the door and is floored to see Tessa, who says she’s the special delivery.

Mariah embraces Tessa before they head to the couch. Tessa confesses she’s only in town for a couple of hours. Mariah says they should make the most of their time together, so they make love. Afterward, Mariah’s grateful for this surprise. It was exactly what she needed, but Tessa grows concerned. She can tell something’s off with Mariah and asks what’s going on.

Mariah declines to share since it may not be her secret to spill. She tells Tessa it’ll be OK and they can discuss it at a later date. Mariah confides some of her fears to Tessa. When Tessa walked out that door, part of her was scared Tessa wouldn’t come back.

Tessa doesn’t understand why Mariah would think that and offers reassurance about her love. Mariah hints that people who love you still leave sometimes. She doesn’t say anything about Sharon Newman’s (Sharon Case) diagnosis before Tessa jets off again.

At the cottage, Sharon is glad to be with Rey Rosales (Jordi Vilasuso) for movie night. She doesn’t care what they watch; she’s just enjoying this time with him. They eventually shift gears and play cards instead of picking a flick. Sharon laughs over her game of gin rummy with Rey, but she admits her mind keeps racing. She feels hopeful one minute and in despair the next.

Rey leaves and comes back with Faith Newman (Alyvia Alyn Lind), so Sharon gets another mood boost. She’s thankful as Faith hugs her and settles in on the couch beside her. The Young and the Restless spoilers say Sharon’s cancer storyline will continue to bring some ups and downs. We’ll give you updates as other Y&R news and rumors emerge. Stay tuned to see what else is brewing in Genoa City.