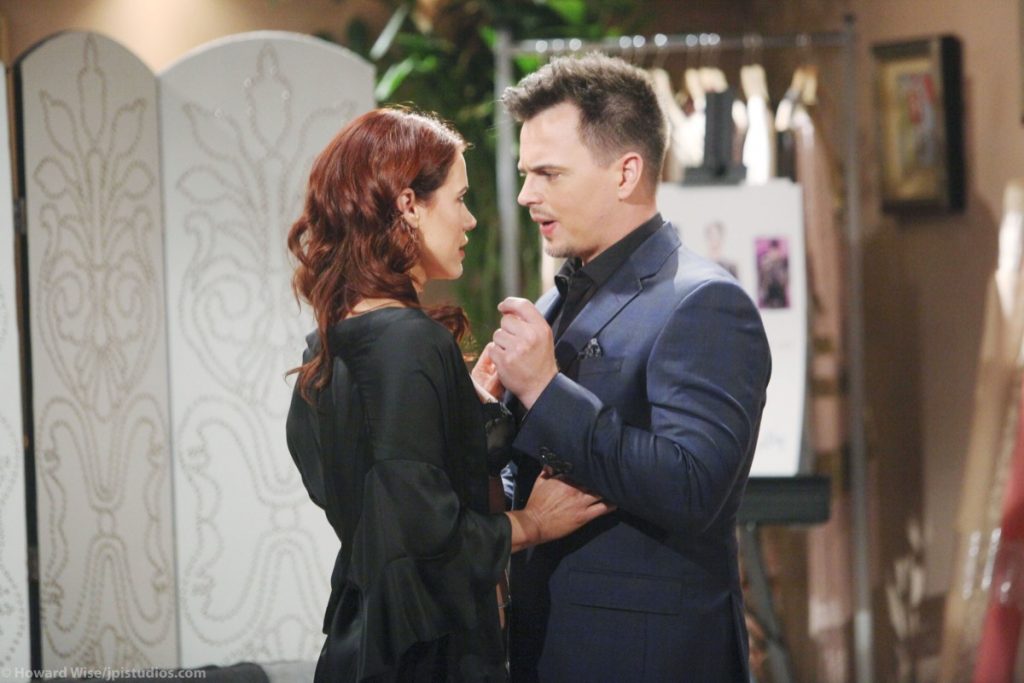 The Bold and the Beautiful spoilers for Monday, January 20, tease that Sally Spectra (Courtney Hope) will get some unexpected and devastating news. As B&B viewers know, she’s just called Wyatt Spencer (Darin Brooks) over to Forrester Creations for a meeting, and once Wyatt got there, he found Sally wearing slinky lingerie and set to seduce him.

Unfortunately for Sally, Wyatt arrived with the intention of breaking up with her, and on Monday’s B&B episode, he’ll pull away from their kiss and lay the truth on her…that he has drifted from their relationship and that he realized that he’s still in love with Flo Fulton (Katrina Bowden). That’s going to be difficult news for Sally to hear.

The Bold and the Beautiful spoilers say that Sally will make it quite difficult for Wyatt to break up with her. We’ll see what happens on Monday’s episode, but it seems that Sally might not fully grasp that Wyatt is totally breaking things off with her. She might think that he’s simply ending the engagement, but whatever the case, it’s going to be a difficult scene.

Of course, this will all be complicated by the fact that Sally’s been going through a lot on her own. As B&B viewers know, she’s been having problems at work, with Ridge and Steffy Forrester (Jacqueline MacInnes Wood) basically threatening to fire her for submitting poor work product. But these problems seem to be caused by some underlying health problems.

So, it looks like Wyatt is going to kick Sally to the curb right before she’s fired and finds out about a very serious health issue, which B&B spoilers say that she’ll find out about soon. Look for Sally to face some difficult times ahead as she regroups and tries to get a grip on her life.

Meanwhile, on Monday’s new episode of B&B, Eric Forrester (John McCook) will remain in shock over the scene that he walked into at the Forrester mansion. As B&B viewers know, he stopped a fight between Brooke Forrester (Katherine Kelly Lang), Quinn Forrester (Rena Sofer), and Shauna Fulton (Denise Richards), and now the ladies want him to pick sides.

Ongoing B&B spoils say that Eric will take some time to think it over, then he’ll ask Shauna to leave the guest house. And that’s going to irk Quinn big time. It looks like Eric will decide that Shauna staying in the same premises as Ridge Forrester (Thorsten Kaye) isn’t a good idea, and Quinn will be horrified.

Well, on Monday’s B&B episode, Quinn will promise that Brooke won’t get away with her meddling in her marriage to Eric. Quinn is livid that Brooke felt that she could just march right in and tell disrespect her to Eric, and she’ll vow to make Brooke pay. We’ll see how that all works out in the end.