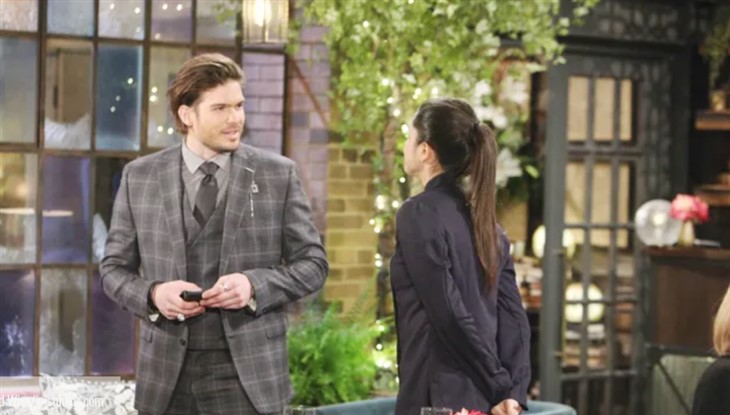 CBS The Young and the Restless spoilers document that Lola Abbott (Sasha Calle) is saying that she is interested in Theo Vanderway (Tyler Johnson). That’s interesting but doesn’t represent anything that’s near to what the early days of Kola were.

Theo is the anti-Kyle Abbott (Michael Mealor). He also is the rebound from Kola so far.

It’s okay that Lola wants to move on. That’s what she should do after being harshly dumped by a man she committed her heart to. It’s good for Lola’s health and well being to not wall herself off, but to get out there again. Whether she should do so with Theo is a pressing plot point.

The Young And The Restless Spoilers – Kyle Abbott Lied To Himself

The manner in which Kyle created the end of Kola was wrong. Lola had to force him to admit that he never stopped loving Summer Newman (Hunter King).

However, Kyle was lying to himself, more so than Lola, during the Kola courtship. Summer’s erratic behavior pushed Kyle off. He found someone who was her opposite and developed a real relationship with Lola.

Leaning into the Kola wedding ceremony and past it, Kyle increasingly demonstrated all the signs of someone who felt trapped. Then, through Lola’s needed prodding, he acknowledged his true feelings, filed for divorce, and re-paired with Summer.

Lola might have been a play against Kyle during the period when the revealed cousins were battling each other. But Theo has come to deeply care about Kyle’s soon to be former wife.

His reputation and personality type precede him, which is causing Lola ongoing angst. But her emotions are still rubbed raw and that’s mostly Kyle’s doing.

The Young And The Restless Rumors: Lola Goes Berserk After Learning About Kyle And Summer’s Engagement https://t.co/XqLgAoplqu pic.twitter.com/0FCzaEbaPw

Lola isn’t exactly playing the Kyle character when one compares what Kola was and what Tola appears to be. Kyle wasn’t coming off marriage when he first met Lola. And Calle’s character hasn’t fallen in love with a person (Theo) who she just met.

However, there are early comparisons that can be made between Kola and whatever Tola might be. Enough daytime scenes haven’t been played yet to determine whether TPTB want Lola and Theo to sustain a serious relationship, or marry someday.

Skyle appears to be solid. Lola is getting over Kyle but isn’t there yet. As for Theo, he’s fallen for Lola and is giving her time and space. But eventually, she’ll need to fully commit, if she decides that Theo has soul mate potential.