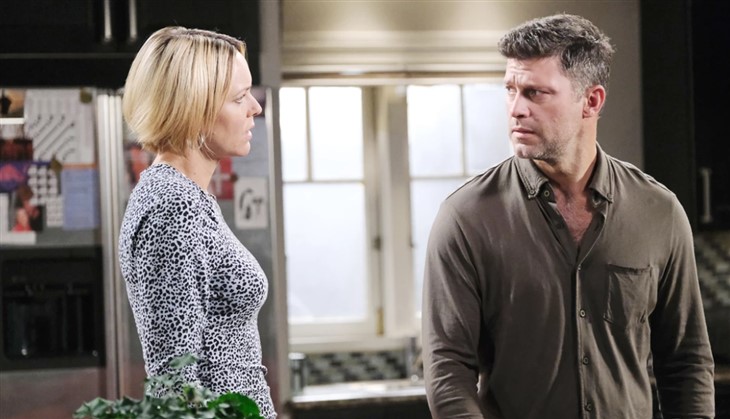 NBC Days of our Lives spoilers tease that the next move Nicole Walker Brady (Arianne Zucker) pulls could shock you. It’s a jaw-dropper and nothing like we’ve seen from her before. How does she react to her husband Eric Brady (Greg Vaughan) leaving her when he goes to Africa? And how will she deal with his evil, malice-filled sister Sami Brady DiMera (Alison Sweeney)?

We have the details and as we said, Nicole isn’t exactly acting like herself! Zucker recently talked to Soap Opera Digest about her character’s upcoming behavior and we have the juicy bits for you here.

First of all, as fans know, Vaughan is leaving the show. Which means Eric is leaving Nicole! They are still on their honeymoon, so you might expect her to refuse to allow him to leave or throw a pity party. Surprisingly, she does neither. Instead, Nicole shows a more mature side of herself.

According to Zucker, “I think she’s finally found security with herself and in this relationship, she has with Eric, so she can feel for him and what she wants. He’s eager to say no to going back to the Congo, but in her eyes, it’s only temporary and he’s doing some good in the world, and I think that’s why she’s so in love with him and the man he is.”

Sami and Nicole have been embroiled in a feud over Allie Horton’s (Lindsay Arnold) baby. Things got very ugly between the two women but it looks like the tide is about to turn.

Allie comes back to town and in the end, a surprising compromise is forged. Zucker says, “I think deep, deep, deep down, Sami and Nicole do have a respect for each other; they just have a problem being in the same room. But to have this baby that is theirs, those lines become blurred now.”

Of course, it is really Allie’s baby! But Nicole is the aunt and Sami is the grandma and the baby could wind up bringing the fractured family back together again.

Days Of Our Lives Spoilers – Salem Never Has A Dull Moment

According to Soap Opera Digest, Sami will back to Europe on September 25. A lot is about to happen in the Brady family before then and you don’t want to miss a single minute of the exciting action!

The Bold And The Beautiful Spoilers: Thorsten Kaye On Wedding Do-Over, ‘It Will Upset Brooke’