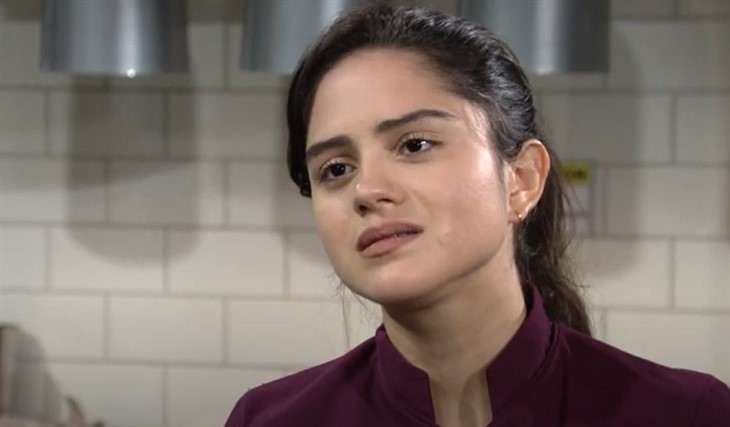 Lovebirds Kyle and Summer are ready to take the next step in their relationship. After being kept apart for so long, the two reunited and vowed not to let anything come between them again.

To cement their love, Kyle proposed to Summer and it looks like another wedding will be happening soon.

However, there’s one person who probably won’t be on the guest list.

The Young And The Restless – Lola Rosales Can’t Move On

Kyle is fresh off a divorce from his ex-wife Lola, who is still heartbroken over their split. Even though Lola is trying to move on, it’s obvious she’s not over Kyle.

Lola is back in the dating game by hooking up with Kyle’s cousin/nemesis Theo Vanderway (Tyler Johnson). Fans loved Lola and Theo together and were excited when the couple went on their first date.

However, it’s obvious the pair already have some issues they need to work out.

Lately, viewers have noticed Lola’s been moodier than usual and believe her problem stems from Kyle and Summer.

Lola said she came to terms with the end of her marriage and realized Kyle and Summer were meant to be. She’s tried to be cordial whenever she runs into the two, but deep down it’s painful for Lola. To see her ex-husband, the man she loved and planned to have children with, move on is tough.

It’s going to be more hurtful when Lola learns of the couple’s engagement.

The Young And The Restless Spoilers: Thursday, September 17 – Chelsea Plants A Bug – Elena Puts Her Foot Down – Lola Rethinks Things With Theohttps://t.co/ubzpYDFvhw

Summer is having the life Lola dreamed of. Summer’s going to marry Kyle and have his babies. Lola feels robbed and believes Summer took everything away from her.

Seeing Kyle and Summer plan their wedding is going to set off Lola, who is already edgier than usual.

With anger and jealousy boiling inside of her, there’s no telling what she’ll do.

While Kyle and Summer are happily making plans for their future, what they don’t know is that trouble is lurking in the form of Lola.

Lola knows that if Summer wasn’t in the picture, she and Kyle would be together. Even when they were married, Summer continued to be a problem for Lola and Kyle. Summer convinced Kyle that she was his true love and they belonged together.

However, Summer’s happiness came at the expense of Lola’s broken heart.

In Lola’s mind, Kyle and Summer don’t deserve to be happy after everything they put her through. That’s why it’s become her mission to make sure they don’t walk down the aisle.

How far Lola is willing to go in her plan remains to be seen, but Kyle and Summer are headed for trouble.

The Bold and The Beautiful Spoilers: Top 5 Reasons ‘B&B’ Is On Fire Right Now