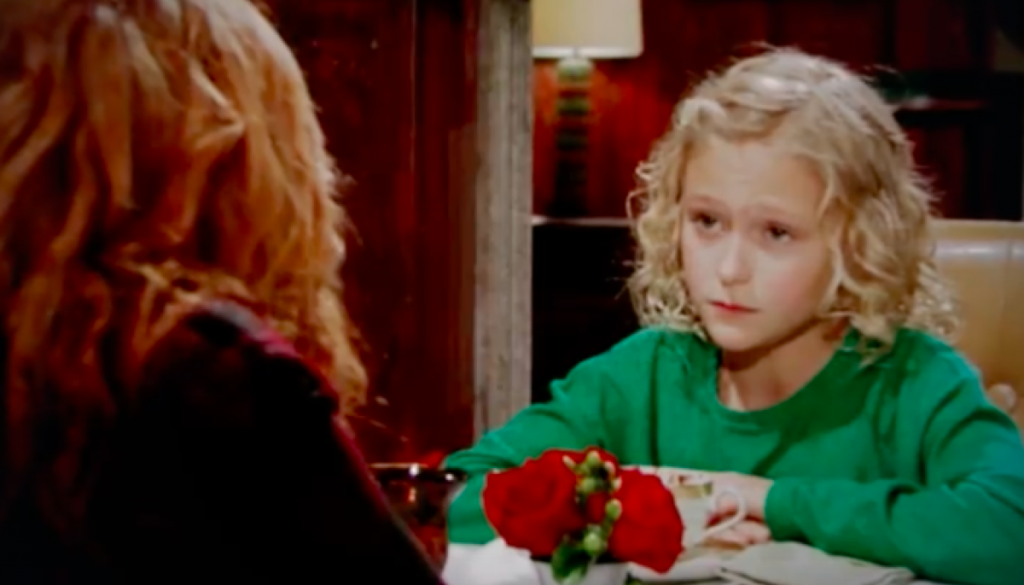 The Young and the Restless (Y&R) spoilers for Friday, January 17, tease that Sharon Newman (Sharon Case) will get ready to deliver bad news. At Society, Mariah Copeland (Camryn Grimes) is checking out Tessa Porter’s (Cait Fairbanks) social media posts when a text comes in. Sharon asks if Mariah can stop by the house, which leaves Mariah wondering if everything’s OK. She seems concerned when Sharon suggests they can talk when she gets there.

Mariah’s distracted and runs into Nikki Newman (Melody Thomas Scott) as she exits, but she assures Nikki she’s fine. At the cottage, Rey Rosales (Jordi Vilasuso) gives Sharon a quick pep talk before she sits down with Faith Newman (Alyvia Alyn Lind). Nick Newman (Joshua Morrow) is also on and Sharon fills Faith in on her cancer.

‘The Young and the Restless’ Spoilers: Phyllis Pushing Her Luck – Chance Being Harassed

After Sharon brings Faith up to speed on her prognosis and treatment plan, Faith frets about the possibility of her mom dying. Sharon insists she’s not going anywhere. After Faith heads upstairs to contact a friend whose mom had cancer, Nick offers Sharon praise. He thinks she did a great job explaining things to Faith.

Next, it’s Mariah’s turn. She’s freaked out over what’s going on and looks stunned when Sharon admits she has cancer. Nevertheless, Mariah composes herself and makes it clear that Sharon has her support. Sharon promises to fight this, and Mariah jokes about them needing T-shirts. They’re all going to help Sharon through this.

Afterward, Sharon speaks with Mariah and Faith about self-examinations. She takes them off to let them know what her lump feels like. Once the women return to Rey and Nick, they settle that Faith isn’t going back to boarding school after the break. She intends to remain in town with her mom and her family.

Once the gang rallies around Sharon with a group hug, the meeting breaks up. Sharon confesses to Rey that she’s terrified, so he pulls her close and reassures her. Faith crumbles back at Nick’s place, but he tells her Sharon’s going to be all right.

At her apartment, Mariah phones Tessa and gets her voicemail. She tells Tessa she misses her and then says not to worry. Mariah lies that everything’s fine and under control as usual. Back at Society, Victoria Newman (Amelia Heinle) explains the dive bar receipt situation to Nikki. She doesn’t believe Billy’s story, so Nikki thinks Victoria should push for honesty without judgment.

At the dive bar, Billy admits to Amanda Sinclair (Mishael Morgan) that he lied to Victoria about them. He doesn’t think this looks like friendship to those on the outside of it. Amanda urges Billy to dig deeper into why he’s lying, but he promises he’s not interested in more than a platonic relationship.

Amanda encourages Billy to really talk with Victoria about his feelings. She thinks Billy needs to know if Victoria can’t accept him for who he is at his core. Later, Billy comes clean to Victoria about his receipt lie. He assures Victoria that he’s not involved with anyone else and reminds her of his love.

Talk turns to what Billy’s been dealing with and how Victoria cares too much in his eyes. She can’t disregard the issues she’s seeing, but Billy wants to be himself without feeling ashamed. After Billy admits he’s been opening up to Amanda, Victoria’s upset. She doesn’t like the fact that Billy can open up to somebody who’s basically a stranger, but not the person he’s committed to.

Things escalate as Victoria insists she doesn’t think this is love. She doesn’t know who Billy is anymore and rebuffs him when he reaches over to touch her. At the ranch, Adam Newman (Mark Grossman) and Chelsea Lawson (Melissa Claire Egan) chat with Victor Newman (Eric Braeden) and ultimately Nikki. There’s talk about Connor conquering his hotel fears and whether he’ll go back to Walnut Grove.

After Adam suggests they’re making the decision together, Victor’s happy to see that Connor’s needs come first. A little later, Adam speaks to Victor alone and reveals he wants to get back in business. He intends to leave a legacy for Connor, so Victor wonders what Adam has in mind. Adam explains that he’ll get Dark Horse up and running again.

At the penthouse afterward, Adam fills Chelsea in on Dark Horse’s resurrection and she’s supportive. Once Adam says he couldn’t possibly love Chelsea more, they lock lips. The Young and the Restless spoilers say Adam’s got some big plans, so it’ll be interesting to see how they pan out. We’ll give you updates as other Y&R details and rumors emerge. Stay tuned to see what else is brewing in Genoa City.