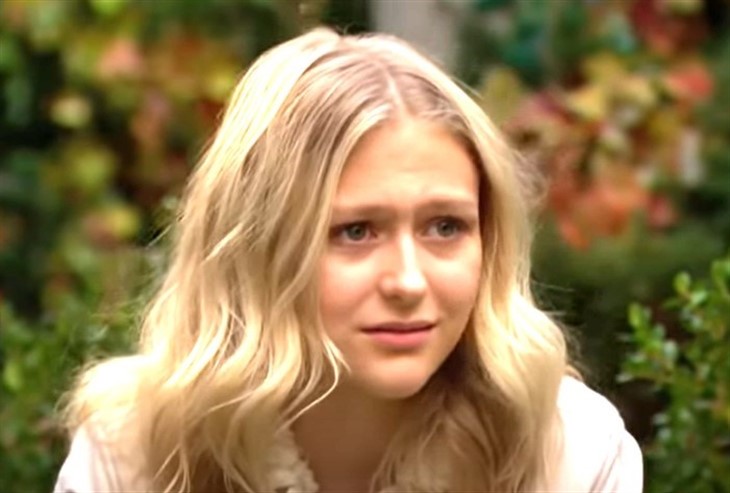 The Young and the Restless spoilers document that in Genoa City, Wisconsin it’s reasonable to project Faith Newman (Alyvia Alyn Lind) is connected to the attempted hit on Adam Newman (Mark Grossman). However, if that proves true it seems most likely that her friend, Jordan, (no last name known for this character who is portrayed by Madison Thompson) will be implicated.

Savvy soap fans know that the recent write-in of Faith’s older friend felt like a negative foreshadowing. It’s already proven to be that, as Jordan included Faith in a party where drinking occurred.

The Young And The Restless Spoilers – Phyllis Summers Knows The Score

Phyllis Summers (Michelle Stafford) is street smart. That backstory and her experience as a mother allowed Faith’s hangover to be detected.

While Jordan believes she’s snowed Faith’s family, she didn’t pass the smell test with Phyllis. Faith should be glad that her father’s revived love is looking out for her, as that may prove to be a key in the ongoing investigation of Chance Chancellor’s (Donny Boaz) shooting, where Adam was the intended target.

Y&R Spoilers – Why Was Someone Trying To Shoot Adam Newman?

Because Adam is being referenced it’s fully reasonable to suggest that he may have ordered his own hit. Not that Grossman’s character was going to have himself erased from the earth.

If he’s behind this crime, then Adam was probably not going to be struck with a bullet. He probably arranged the event in order to frame Billy Abbott (Jason Thompson), who Adam just told Chelsea Lawson (Melissa Claire Egan) he suspects.

But if Adam didn’t set this scene up, then Jordan’s hyper-protective stance over Faith must be considered. Thompson’s character is new, isn’t a regular player, and could be quickly written out of the show if she was holding the gun, or paid someone to take the shot at Adam. That scenario is plausible because of Billy’s article, which caused Faith intense anguish and positioned Grossman’s character as a revenge target.

The Young And The Restless Spoilers – Shick Forever Tied Through Family

Sharon Newman (Sharon Case) and Nick Newman (Joshua Morrow) aren’t together and don’t currently project to be. But they have children, which forever ties them together.

Neither parent was aware of Faith’s slide toward danger. Thankfully, Phyllis intervened, which allows this needed information to be known.

While Shick will be shocked at what’s learned, with Nick gaining that knowledge first, this once famous pairing hopefully doesn’t learn that their daughter was involved, even indirectly, in this shooting.