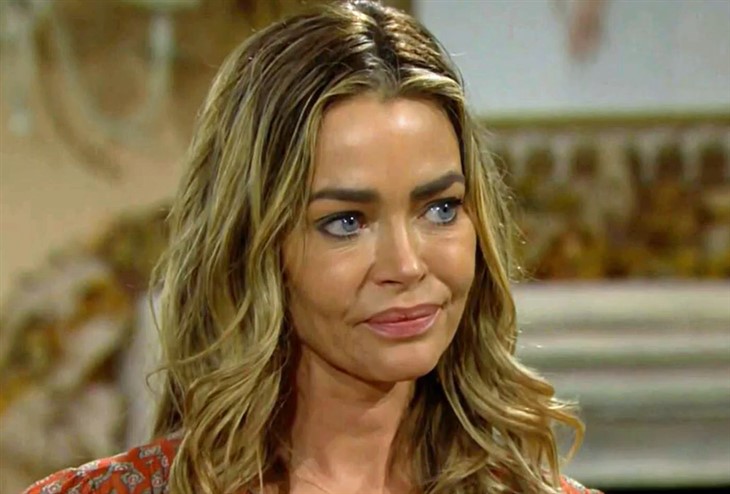 The Bold and the Beautiful spoilers document that in Los Angeles Shauna Fulton (Denise Richards) realized, after a conversation with her daughter and Wyatt Spencer (Darin Brooks), that she needed to move out of the Forrester mansion guest house. Flo Fulton (Katrina Bowden) skillfully directed the talk, where Wyatt was beginning to cross the line in defense of his mother, Quinn Fuller Forrester (Rena Sofer).

Eric Forrester (John McCook) is basically lonely. He misses his wife, as his forlorn looks at her portrait confirm. Eric’s generous nature also had him substituting Shauna’s presence for Quinn’s in his time at home and potentially in his heart.

The Bold And The Beautiful Spoilers – Darin Brooks Kills It

Is there any actor with better comedic chops on B&B than Brooks? Nope. His verbal banter with Bowden, in discussing Quinn’s disposal of his beloved doughnuts, was hilarious.

The above exchange reminded fans of the role-play scenarios that Brooks and Heather Tom (Katie Logan) had during the entertaining Batie relationship. It also was tied to Wyatt’s desire to push his mother out of the beach house and back into Eric’s arms.

Shauna is doing fine following the total disaster that Shidge became. She never planned to fall in love with Ridge Forrester (Thorsten Kaye) and feared that he’d break her heart. That actually happened through her forced error, in following Quinn’s plans to break Bridge, which allowed the bogus wedding ceremony to happen in Las Vegas, Nevada, in what now seems like ages ago.

Going to Eric and telling him that they both knew it was time for her to leave and for Quinn to return home was gutsy. That effort impacts Eric. But Quinn, who is the human wild card, can’t leave well enough alone.

Quinn lacks impulse control. That’s her greatest personal flaw. She did work hard on resisting the dark thoughts that present themselves in her mind these past years. But the chance to knock Brooke Logan Forrester (Katherine Kelly Lang) off the chessboard was just too tantalizing in 2020.

It’s not that Quinn did anything specifically aimed at Eric. Her defiance of his wishes to back off Brooke, in and of itself, wasn’t the sole problem. But involving Ridge, who is Eric’s son, meant that McCook’s character would be damaged if all was revealed, which is what happened.

So, as was true during the referenced arc, Quinn is the only person who can defeat Quinn. She should embrace humility, but that’s not who Sofer’s character is and may never be.