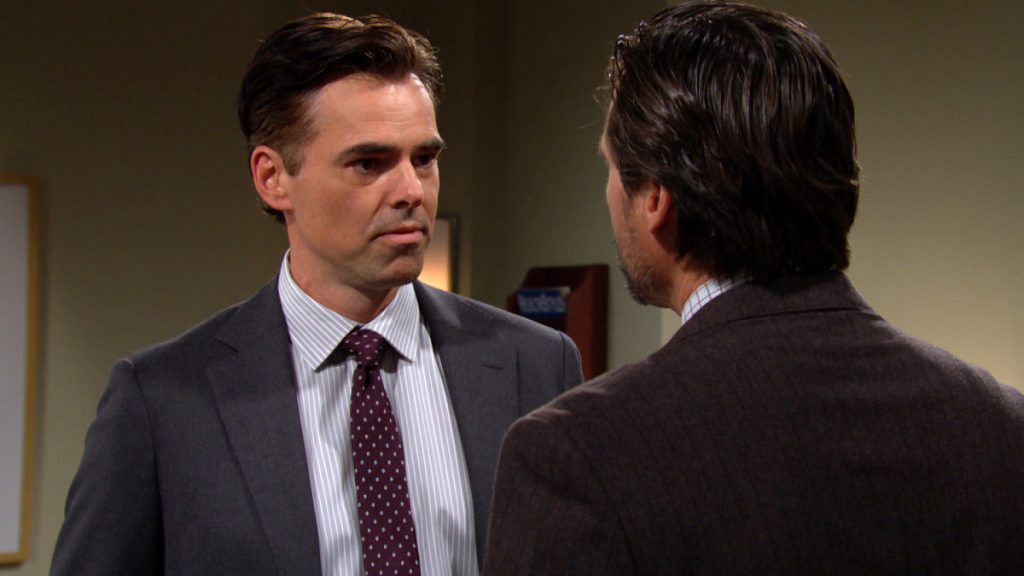 The Young and the Restless spoilers document that Billy Abbott (Jason Thompson) has once again trapped himself in an emotional box. He’s sincerely interested in Vickie Newman’s (Amelia Heinle) well-being. But the health scare she endured, which was related to a lack of proper blood flow to her heart, wasn’t an opportunity for an in-person visit.

Nick Newman (Joshua Morrow) was at Genoa City Memorial Hospital. He and Nikki Newman (Melody Thomas Scott) were visiting with Vickie when Dr. Nate Hastings (Sean Dominic) provided an upbeat prognosis and told everyone that she would be returning home on that day.

Billy was at the hospital because Nikki called to inform him of Vickie’s condition. Thomas’ character advised that the courtesy was offered because of the children. He took that as an opportunity to see Victoria, until Nick stopped Billy from doing so.

Young And The Restless Spoilers – Villy’s Latest End Was Needless

Billy literally talked himself out of the latest version of Villy. Taking her and everyone else, except Amanda Sinclair (Mishael Morgan), by surprise, Billy recently stunned Vickie by telling her that he was ending their relationship and moving out.

Vickie took a long time in coming to trust Billy again. She understandably came to believe that he’d changed, which was largely based on his stand-up nature during the horrid J.T. Hellstrom (Thad Luckinbill) period that came to a close last year.

Young And The Restless Spoilers – Bamanda No Sure Thing

Billy seems to have it in his mind that Amanda is his next soulmate. That’s a reach, as both characters are just getting to know each other. She has plenty of options beyond Billy, even though Amanda arrived in GC in 2019.

Bamanda does have potential, as there’s a clear personal chemistry between both people. But there are also warning signs, as Billy seems to have glommed onto Amanda because she has Vickie-like traits.

The Young and the Restless Spoilers: Kyle’s Puts Lola In The Past And Focusing On New Future With Summer https://t.co/cS3SD3e5hB pic.twitter.com/a54tPbf0xo

Young And The Restless Spoilers – Vickie Newman Clings To Family

He’s far from perfect, but Victor Newman (Eric Braeden) is still in Vickie’s life, as is her mother, Nikki. Niktor is allowing Vickie and the kids to live at the Ranch, as Vickie regains her footing.

Billy lost his father, John Abbott (Jerry Douglas), years ago. Jill Fenmore Atkinson (Jess Walton) is a good mother to her son, but isn’t in town on a steady basis. So Billy has come to lean on his significant others for needed direction in recent years.

The Newman’s are far from a stable clan, but they do often stick together in times of crisis. Billy arguably hasn’t had as much support during his periods of strife, including this one. Though he threw his strongest rock, Vickie, overboard.