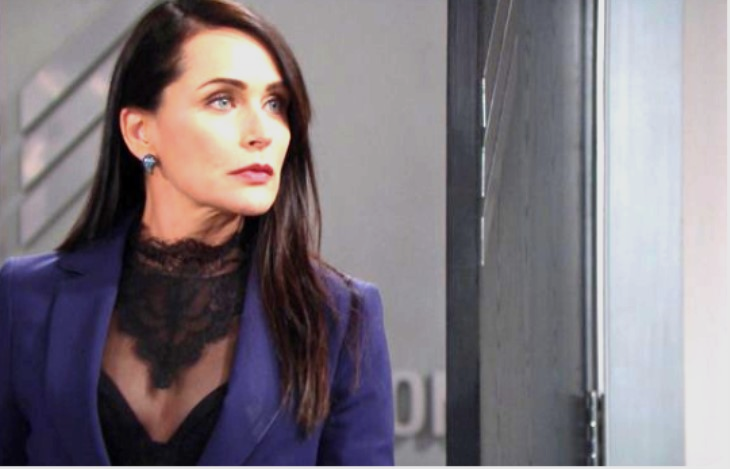 The Bold and the Beautiful spoilers reveal Quinn Forrester (Rena Sofer) isn’t close to being done with Brooke Logan Forrester (Katherine Kelly Lang). The brutal brunette delivers another crushing blow to her enemy by reaching out to Ridge Forrester (Thorsten Kaye). She tells him about Shauna Fulton (Denise Richards) leaving town, but it’s not for the Vegas vixen’s benefit. It’s just to hurt Brooke some more.

The Bold and the Beautiful Spoilers – Shauna Fulton’s Decision

B&B spoilers reveal that Shauna decides to leave L.A. and go back home to Las Vegas. Of course, she only knows about the “Bridge” reunion party and has no clue that Ridge has ended things with Brooke. She wasn’t at the party and doesn’t realize that the video of Bill Spencer’s (Don Diamont) kiss was shown to everyone at the party.

Quinn can’t convince Shauna to stay in town, so she reaches out to Ridge. She tells him that Shauna is leaving town and urges him to go to her before it’s too late. Feeling crushed by Brooke’s betrayal, Quinn doesn’t have to push him too hard. As revealed in the latest issue of Soap Opera Digest, Ridge gets to Shauna before she heads out the door.

The Bold and the Beautiful Spoilers – Leaving for Las Vegas

The Bold and the Beautiful spoilers reveal that Ridge will talk to Shauna. Neither of them really know where things will lead. Ridge isn’t even sure of his own feelings, but Shauna thinks she is in love with the designer. The two will end up leaving to Las Vegas together and make a secret pact.

Quinn might make it seem like she told Ridge so Shauna would have another chance with the designer. However, fans know that isn’t exactly true. Quinn’s number one motivation is to hurt Brooke. She’s already destroyed “Bridge” by airing the “Brill” kiss. She is going to want to deliver one more crushing blow to her enemy. What better way to do that then to send Ridge to the one woman Brooke wants him to stay away from?

However, will Quinn’s plan eventually fail? Ridge and Shauna might go to Las Vegas together, but that doesn’t mean they will stay together. Could Brooke find a way to get back her man, despite the anger over Bill’s kiss? Fans will have to keep watching to find out how this story develops over the next few weeks.