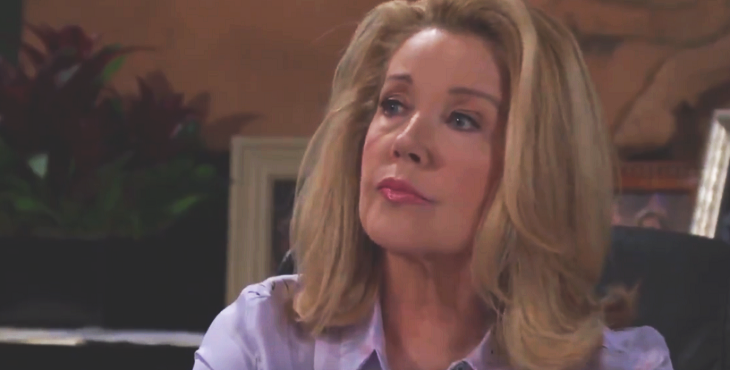 Nikki knows that Victor went to Hope Adams Wilson’s (Signy Coleman) farm after Adam Newman (Mark Grossman) told him that the farm was in a state of disrepair, and that the caretaker was aging and no longer able to take care of the farm as he once was. Victor told Adam he would take care of the problem and hire him some assistants, so that is what Nikki assumed he was doing, but perhaps is a little puzzled as to why he had to go down in person. Perhaps he just wanted to do the hiring and interviewing in person or see the state of the farm for himself, although Adam really wouldn’t have had a reason to lie about something like that.

Nikki just has one of those feelings that the reason for Victor’s sudden trip to Kansas is for a lot more than just hiring new caretakers for Hope’s farm and checking it out for himself! He wouldn’t just suddenly go out of town for something like that with Victoria Newman (Amelia Heinle) recovering slowly and living in their home, and even asked him about it, considering he has been so agitated since Adam’s visit – but he downplays it and says he’s flying out to oversee the hiring and the repairs personally because he feels like he should be there to supervise. Nikki has her doubts – she expects it has something to do with Victor’s past in Kansas and with Adam!

The Young and the Restless News: Cast And Crew Celebrate Another Milestone For Hit Soap https://t.co/PRMrXlzKh7 pic.twitter.com/TOzM4Nh6bj

The Young and the Restless Spoilers: Several Crises Happen While Victor Newman Is Away

Victor went alone because he felt Nikki needed to stay behind in Genoa City, and of course that is going to disturb her a little bit because she remembers what happened on Victor’s previous trips to Kansas, with him being presumed dead the first time and his being gone for an extended period of time, and then another time he went he returned with a wife, and then Adam happened! But this is many years later so Nikki tries not to let those memories bother her. However, several crises happen while Victor is away, most seriously Victoria’s setback and return to the hospital with chest pains; which Nikki is concerned might be Victoria’s heart!

Previously, Victoria had told Nick Newman (Joshua Morrow) that the fight had gone out of her, and that she couldn’t care less if a deal he came to the ranch to ask for help with tanked; she said she felt lost and had a ball of dread in her stomach, and collapsed after telling her brother that was not who she was! It sounds like Victoria’s past PTSD that haunted her after having been abused by JT Hellstrom (Thad Luckinbill) so many years ago may have returned over this latest situation of her being stabbed! The deal tanking would not be such a serious crisis compared to Victoria’s, especially if it turns out to be her heart, but it would be a serious crisis to Victor just like Victoria’s setback would be!