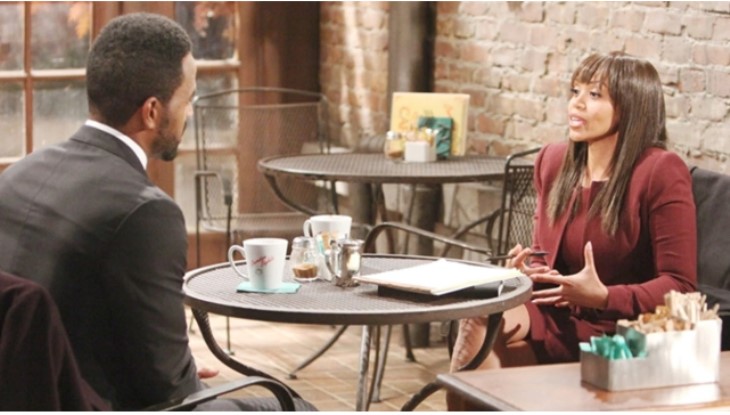 The Young and the Restless spoilers document that Amanda Sinclair (Mishael Morgan) is increasingly open to the possibility of romance with Nate Hastings (Sean Dominic). Elena Dawson (Brytni Sarpy) and Devon Hamilton (Bryton James) are pleased with that development, with Billy Abbott (Jason Thompson) seeming to be written out of Amanda’s scenes.

As viewers recall, Bamanda appeared to be the next great Y&R couple. While this paring still could happen, Amanda seems to feel that Billy offers too much drama, which she doesn’t need in her life right now, or ever, actually.

Nate was originally recruited by his uncle, Neil Winters (Kristoff St. John), to become Victor Newman’s (Eric Braeden) personal doctor. That allowed the reintroduction of the Hastings’ family into the show, with both of Nate’s parents have been key members of the cast starting in the 1980s.

As Nate came to explain, a woman he greatly cared for and was in a relationship with passed away when he was living outside of Genoa City, Wisconsin. A brief personal connection with Abby Newman (Melissa Ordway) didn’t go anywhere and the potential of anything happening between Nate and Elena hasn’t occurred. So, expanding Nate’s personal life makes sense.

The Young And The Restless Spoilers – Amanda Sinclair Deepening Ties

Amanda had a legal practice in Madison, Wisconsin, which is the town aside of GC. Her life took a turn for the worse because of Ripley Turner (Christian Keyes). His recent visits with Amanda explained their messy relationship and resulted in Vickie Newman (Amelia Heinle) being stabbed in a case of mistaken identity. Thankfully, Nate was able to save Vickie’s life.

Fresh starts exist because Amanda’s personal history reveals her as a good soul and because it was proven that she wasn’t involved with Colin Atkinson’s (Tristan Rogers) scheme to launder Devon’s fortune. With that, Nate and Amanda are interacting with increasing regularity.

Whether Y&R is writing Billy and Lily together, or he and Amanda will follow through on the beginnings of their bond remains to be seen. But for the moment Amanda is focusing on Nate, with a promising path ahead for a couple that could be dubbed Namanda.

The Bold and the Beautiful Spoilers: Flo Spots Evidence During A Conversation With Dr. Escobar – Will She Tell Wyatt The Truth?