General Hospital (GH) spoilers suggest that Elizabeth Webber Baldwin (Rebecca Herbst) may be obsessing over her son, Cameron Webber (William Lipton) at the expense of her other kids. GH fans know that Cameron has had some very traumatic experiences in the recent past. Yet doesn’t it seem Elizabeth’s other kids might miss their mom’s attention? 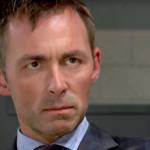 GH fans know that not long ago, thugs of the criminal kingpin, Cyrus Renault (Jeff Kober) kidnapped Cameron and his date to the school dance, Trina Robinson (Sydney Mikayla). At first, Cameron and Trina suspected nothing. The two young friends sat in the back of a limo, snapped selfies, and generally goofed off until Cameron and Trina noticed their driver was taking them out of the way. Cameron discovered that the limo driver was taking an exceedingly long time to get them to the school and he started to get spooked. Eventually, Cameron’s suspicions were proved correct when the driver pulled a gun on him and Trina.

The driver took away Cameron and Trina’s cellphones and then tossed them out of the limo’s window. Shortly after, Cameron and Trina went through a horrifying hostage situation where there was a lot of shooting, many people got killed, Cameron thought he was going to die, and Trina’s father, Marcus Taggert (Réal Andrews) was mortally wounded.

Can anyone blame Elizabeth Webber for freaking out when she learned that her oldest son was kidnapped at gunpoint? One would expect that most mothers might focus, at least for a time, on the needs of a child that recently went through such horrific trauma!

Although some GH fans may argue that Elizabeth is ignoring Jake Spencer (Hudson West) and Aiden Spencer (Jason David) in favor of Cameron, this probably isn’t true. While viewers may not have seen either Jake or Aiden for a while, it’s likely they’re just fine. The truth is, Elizabeth may be just as much in a state of shock as Cameron is. It may be for entirely different reasons, but the emotional and mental horror is still there. Cameron nearly died. Cameron’s trauma might lie in the fact that he was suddenly faced with his own mortality. Elizabeth’s horror, on the other hand, lies in the fact that she could have lost her firstborn son, and she was helpless to stop it from happening!

Both Cameron and Elizabeth may simply need the assurance that Cameron is going to be safe. For Cameron, he may need to learn that it’s okay for him to have been afraid. He might “get it” in his head, but not in his heart. That’s why Elizabeth wanted Cameron to discuss how he feels with a psychiatrist so badly. That’s why Elizabeth spent money that she and Franco Baldwin (Roger Howarth) didn’t have in order for Cameron to speak with Dr. Neil Byrne (Joe Flanigan).

General Hospital Spoilers: Who Is The Best Man For Alexis Davis, Former Lover Or Someone New?https://t.co/O4sFbCNdXF

GH fans can most likely rest easy knowing that while Elizabeth deals with her worries over Cameron, Franco is holding down the fort. Franco may still be bonding with Aiden over video games and Jake may be doing much of the same with Jason Morgan (Steve Burton).

The bottom line is that once things settle down, GH viewers will probably see Elizabeth go back to being an emotionally available mother to all her children.

The Bold and The Beautiful Spoilers: Sally Agrees To Treatment, But She Demands Something From Wyatt