The Young and the Restless spoilers indicate that Adam Newman (Mark Grossman) will get an unexpected blast from the past. Rather than fly out to Paris to start on a new life together, he and the love of his life Chelsea Newman (Melissa Claire Egan) will be headed back to Adam’s childhood home in Kansas in the hopes that they can get some answers to their questions. However, Adam will end up meeting someone he hasn’t seen in a very long time. Here’s what you need to know.

The Young and the Restless spoilers say that Adam and Chelsea are hoping to meet up with his mother’s Hope while in Kansas. But instead, the couple will come face to face with someone who knew the prodigal Newman son way back when. That person happens to be Alyssa Montalvo (Maria DiDomenico), a childhood friend of Adam’s. 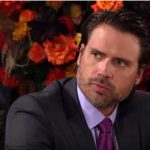 There’s a very good possibility that Alyssa might be able to provide Chelsea with some insight about Adam and hopefully explain why he operates the way that he does. After all, Alyssa did spend a lot of time with Adam during his formidable years.

The Young and the Restless spoilers also indicate that actress Maria DiDomenico will make her debut as Alyssa beginning to Monday, March 16th episode. And if the stunning brunette looks familiar, that’s because she briefly appeared on Days of Our Lives back in 2017. Her character was named Fran, Claire’s co-worker at the Mandalay Café.

Of course, this trip can go one of two ways. Chelsea might end up getting the answers to the questions that she has long had. That, or she might end up feeling incredibly jealous over the bond that Alyssa and Adam once shared. After all, there is no denying that Adam is certainly a very complicated person with an even more complicated past. There’s also a good possibility that Alyssa might end up stirring some trouble as well. With that said, fans will have to tune in to The Young and the Restless to find out what will happen next!

For now, come back right here for all the latest news and updates on all of your favorite soaps.