Mariah Copeland (Camryn Grimes) and Tessa Porter’s (Cait Fairbanks) relationship is going through a rough patch on “The Young and the Restless.” If they can’t trust each other, they may end going on separate ways.

Viewers may recall that Tessa is currently on a road tour with her ex-husband Tanner Watts (Chase Coleman). Tessa reassured Mariah that she never loved Tanner and they left with Mariah’s assurance. But since then, Mariah has started to feel insecure and fearful of the things that may happen between them. 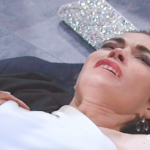 Mariah’s concerns grew, even more, thanks to Lindsay’s (Kirby Bliss Blanton) stories about unexpected hook-ups and how wildlife can be for those who are on the road. Tanner’s not helping to ease Mariah’s worries either. Instead, he’s making things worse by sending her texts using Tessa’s phone and making uninvited appearances while Tessa and Mariah are having video chats.

Y&R Spoilers – For The Week of February 24

Things will go from bad to worse for the couple when Mariah struggles to get in touch with Tessa. When she does, it’s Tanner who picks up and tells her that Tessa is in the shower. This will make Mariah feel more uncomfortable and insecure.

Later on, Mariah will finally see her lady love as Tessa returns her call and the pair talks via video chat. However, things won’t go as smoothly as one would expect because Tanner will show up in the background roaming around the room shirtless.

Mariah’s suspicions get the better of her and she’ll immediately jump to conclusions. She’ll confront Tessa and ask her if she’s sleeping with Tanner. Tessa will be caught off guard and Mariah’s cheating accusation will leave her feeling upset and humiliated.

The Young and the Restless Spoilers – Camryn Grimes On Cheating Accusation

“Mariah truly wants Tessa to be happy and fulfilled in this very exciting venture in her career,” Grimes said.

But the actress also noted that her character has left Tessa completely unaware of what’s going on with her life like losing her job and her mother’s cancer diagnosis. So when she drops the cheating accusation, Tessa will feel that it’s coming out of the blue.

Unless Mariah starts to open up to Tessa and let her know what’s going on, it won’t be long before things go downhill between them.