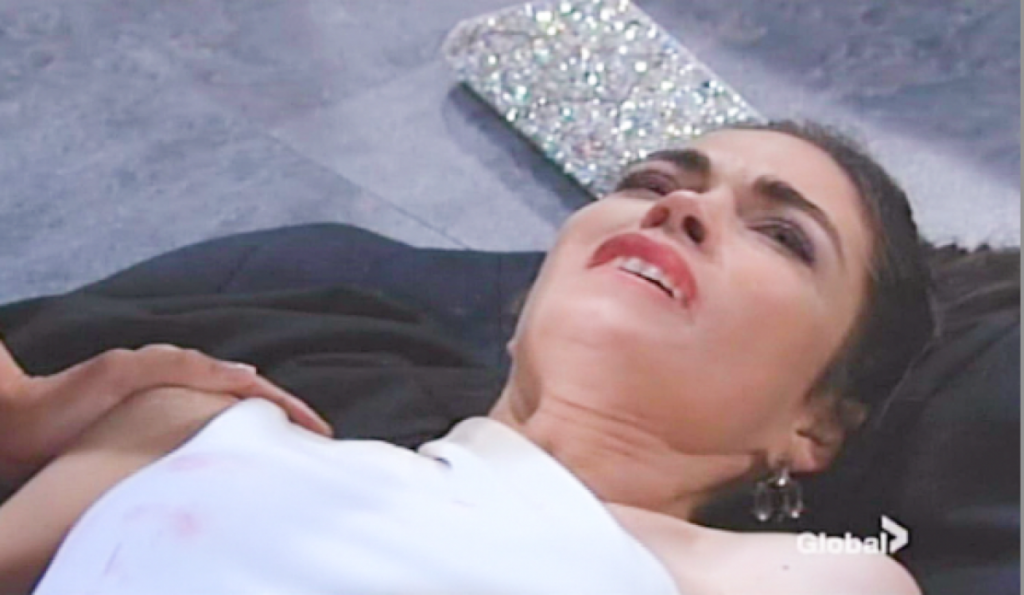 The Young and the Restless (Y&R) spoilers for Friday, February 21, tease that Ripley Turner (Christian Keyes) is in for a shock. As Ripley’s making his escape, he runs into Amanda Sinclair (Mishael Morgan) near the elevator. Ripley’s taken aback to see her standing there since he thought he just stabbed her in the art gallery. He doesn’t stick around to answer Amanda’s questions.

Billy’s on the hot seat and is told to get a lawyer by Paul. Victor Newman (Eric Braeden) starts blasting him, but Billy protests that he didn’t do this. He insists it wasn’t him as Amanda appears and confirms that he’s right. Amanda brings everyone up to speed on her stalker ex and the case of mistaken identity.

Abby Newman (Melissa Ordway) wants Chance Chancellor (Donny Boaz) to track down the man responsible and make him pay. After Victoria’s taken to the hospital, Billy’s eager to head there as well. He tells Paul and Rey Rosales (Jordi Vilasuso) that they have a suspect along with a motive.

Rey eventually tries to get a few more answers from Amanda. She’s certain that Ripley now realizes his mistake; he’s aware that he stabbed the wrong victim. Rey is going to put an officer outside Amanda’s hotel suite and doesn’t want her blaming herself over this.

Nate works to stabilize Victoria at the hospital while the Newmans gather in the waiting room. Later, Nate joins them to explain Victoria’s liver and lung injuries. She’s going into surgery now. Next, Paul shows up and listens to Victor rant. Victor insists Billy is just as responsible as Ripley and is irked when Billy ultimately appears.

After Victor rages over Victoria’s near-death experience, Nick Newman (Joshua Morrow) tries to break things up. Adam Newman (Mark Grossman) and Nikki Newman (Melody Thomas Scott) push Billy to go, but he’s reluctant. Chelsea Lawson (Melissa Claire Egan) leads Billy away and takes him back to the Grand Phoenix. She advises him to avoid the hospital and warns him not to do anything crazy.

Phyllis Summers (Michelle Stafford) makes sure Amanda is tucked safely in her suite. Amanda is clearly still rattled over the whole ordeal. Phyllis wants Amanda alive since she’s her only friend, so she insists she should lock the door. Amanda is in shock over Ripley escalating this to the point of trying to kill her.

Phyllis embraces Amanda and promises she’s not to blame before taking off. Once Phyllis winds up at the hospital, Nick’s thankful for her support. Adam steps to the side with Victor and doesn’t know what to say. Victor suggests there’s nothing to be said during times like this. They focus on the aspect of family and how it’s all that really matters.

The Young and the Restless Spoilers – Victoria Newman Pulls Through

Back at the Grand Phoenix, Billy’s outside Amanda’s door. He identifies himself and insists he wanted to make sure she was OK. After Amanda opens up, she admits she feels responsible as does Billy. At the hospital again, Nate and Elena Dawson (Brytni Sarpy) have some updates following Victoria’s surgery. Victoria pulled through and is in a medically induced coma, so it’s a waiting game now.

The Young and the Restless Spoilers: Phyllis Gets Involved In Major Drama – Adam And Chance Targeted https://t.co/h2vtybIGiv pic.twitter.com/G5a5jUjSfT

At home, Sharon Newman (Sharon Case) speaks with Noah Newman (Robert Adamson) about her cancer and chemotherapy. She wants to hear about Noah’s photography and love life. Noah confesses that he’s seeing somebody, but they’re taking things slow. Sharon feels like Noah should return to London, but he wants to stick around and support her. She allows Noah to stay in town for her surgery.

Sharon eventually hears the horrible news from Rey and passes it along. She tells Noah and Faith Newman (Alyvia Alyn Lind) that Aunt Victoria was stabbed. The Young and the Restless spoilers say tons of action’s coming up, so stay tuned to see what other Y&R drama’s brewing.