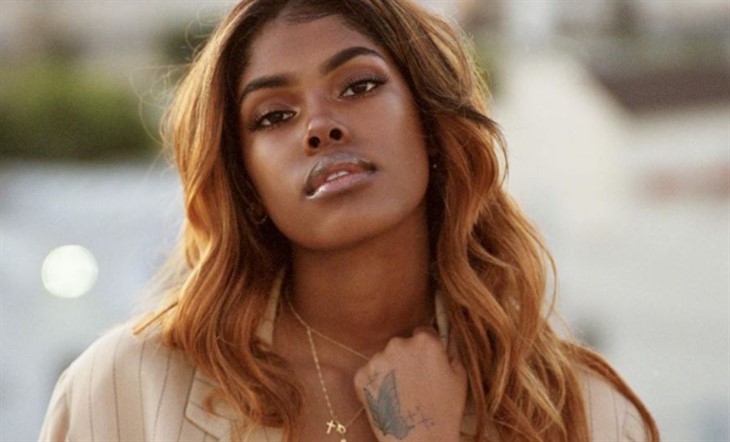 The Bold and the Beautiful (B&B) spoilers have some news to pass on about a new addition to the show. Actress Diamond White has been cast on B&B in the role of Paris Buckingham on the CBS soap. Paris will be the sister of Zoe Buckingham (Kiara Barnes) and the daughter of Reese Buckingham (Wayne Brady).

You might recognize Diamond White from some of her previous roles. Diamond had a recurring role as Lala on Empire back in 2019, as well as in Dear White People from 2018-2019. In addition, Diamond appeared on the TV series Fresh Off The Boat and Code Black. Diamond also appeared in Tyler Perry’s Boo! A Madea Halloween as well as its sequel. And back in 2012, Diamond appeared as herself on The X Factor.

The Bold And The Beautiful Spoilers – Diamond White

According to Deadline, Diamond will film her first episode on Friday, September 18. The episode is currently scheduled to air on Monday, November 2.

Diamond has not yet commented about her new and exciting role on social media, although she did retweet Deadline’s announcement of her addition to The Bold and the Beautiful cast along with some smiley face emojis.

It should be interesting to see what kind of relationship Zoe has with her sister. Paris certainly someone who hasn’t come up before on the show, and she may come to Los Angeles to surprise Zoe. One wonders if Paris will provide some sort of interference in Zoe’s burgeoning relationship with Carter Walton (Lawrence Saint-Victor).

Of course, it’s also the case that Zende Forrester Dominguez (Delon De Metz) will be hitting the Bold and the Beautiful canvas soon, and that he’ll be interacting with Zoe and Carter, so it stands to reason that he’ll interact with Paris as well.

We’ll see what Paris brings to the show – will she be a troublemaker type, much like Zoe was when she first came to Los Angeles seeking out Xander Avant (Adain Bradley)? And how will she feel about all of the trouble that Zoe and Reese got into earlier this year with the Beth Spencer (River Davidson and Madeline Valdez) scandal?

The Bold And The Beautiful Spoilers: Friday, September 18 – Steffy Hides Her Pain Pills – Hope Calls Out Liam On His Reaction To Steffy & Finnhttps://t.co/dCCK8E7yK4

Perhaps Paris will want to get in on the action at Forrester Creations along with her sister. As B&B viewers know, Zoe is starting to really make her mark at Forrester, now that she’s working closely with Hope Spencer (Annika Noele) on the Hope For The Future line.

Are you looking forward to seeing Zoe’s sister pop up in Los Angeles? Stay tuned to B&B and don’t forget to keep SOS bookmarked for the latest Bold and the Beautiful spoilers, daily episode recaps, and news.