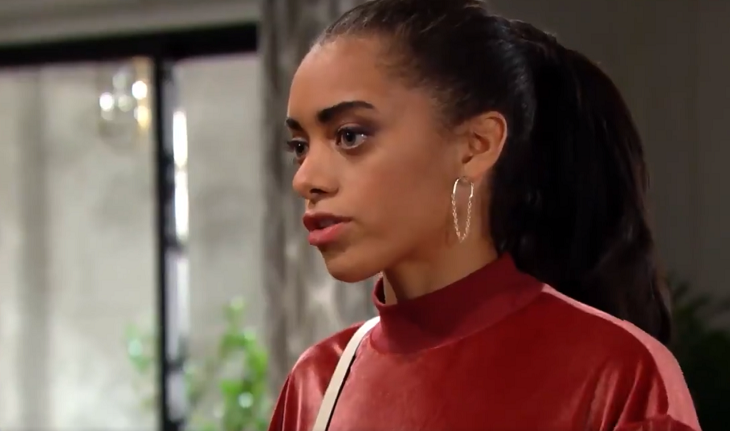 The Bold and the Beautiful spoilers reveal Carter Walton (Lawrence Saint-Victor) shows a romantic interest in Zoe Buckingham (Kiara Barnes). She is flattered but he also has a serious question for the model. He wants to know if she and Thomas Forrester’s (Matthew Atkinson) relationship is legit. What will she say?

The Bold and the Beautiful Spoilers: Zoe Buckingham Played

B&B spoilers indicate that Zoe is just being played by Thomas. Even though there are hints that he isn’t serious about her, the model sincerely hopes that he is. So, she is taking all of these clues and just dismissing them. However, nothing can prepare her for the moment she finds Thomas comforting Hope Logan (Annika Noelle).

Fans have seen how Thomas plans on getting back Hope. Unfortunately, he is using Zoe in order to do it. The model has real romantic feelings for the designer, so his game is hurting more than just Hope. It will have a devastating effect on Zoe too and make sure not want to trust anyone in the future.

So far, Hope is falling for Thomas’ game. She sees him as a changed man and someone she can trust. Especially after Liam Spencer (Scott Clifton) broke her heart by kissing Steffy Forrester (Jacqueline MacInnes Wood).

The Bold and the Beautiful Spoilers: Thomas And Hope Hook Up – Liam No Longer In The Picture #BB #BoldandBeautiful https://t.co/GDyKV5JA4m

The Bold and the Beautiful spoilers reveal Carter will show some interest in Zoe. Now, it is real interest or could someone put him up to it? The only reason we are wondering is that Carter asks her if the relationship between her and Thomas is genuine. It almost sounds like someone else might be putting him up to asking her to divulge the facts.

However, will she tell him the whole truth or continue believing that Thomas is really interested in her and not Hope? It really depends on when she discovers that Hope fell into Thomas’ arms.

The Bold and the Beautiful Spoilers: Complicated Truth

The truth is complicated for Zoe. She wants to follow her heart, but it is clear from her facial expressions that her brain is telling her Thomas’ feelings aren’t genuine. It’s going to be heartbreaking, but the sooner she admits it’s a game, the better off she will be.