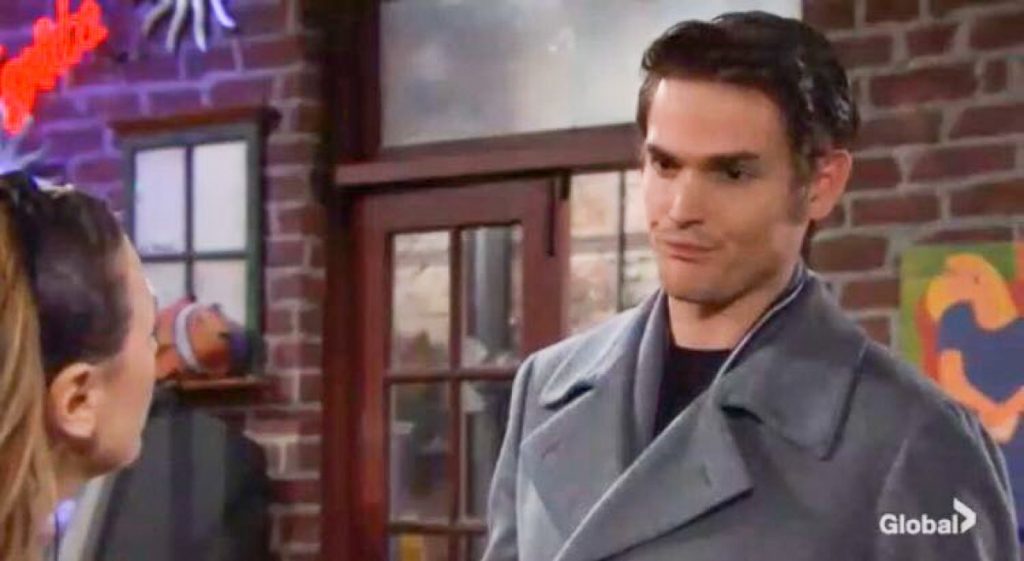 The Young and the Restless (Y&R) spoilers for Friday, January 24, tease that some surprises are in store. We should mention that impeachment trial coverage has been affecting Y&R’s schedule. Since more preemptions are possible, this airdate could change. That’s just something to remember as we get ready for the exciting drama ahead. Now let’s talk about what’s happening in this episode.

First, Chelsea Lawson (Melissa Claire Egan) gets updates on Adam Newman’s (Mark Grossman) latest purchase. At the Grand Phoenix, Adam fills Chelsea in on acquiring a tech company that specializes in videogames. They discuss Connor Newman (Judah Mackey), who’s spending his first day at his new school. Adam and Chelsea are hopeful about Connor staying on track and being a normal kid.

Over with “Chance” Chancellor (Donny Boaz), he encounters Phyllis Summers (Michelle Stafford). Since Abby Newman’s (Melissa Ordway) busy this week, Phyllis points out that she isn’t. Chance realizes Phyllis is pushing for a date and ultimately agrees to have dinner with her.

Back with Chelsea, she shuts down Chloe Mitchell’s (Elizabeth Hendrickson) Adam negativity and suggests taking the kids to get hot chocolate. Before Chelsea heads out, she spots Chance and Adam having a conversation that’s awfully intense. Chelsea ends up at Crimson Lights with Chloe, Connor and Bella Fisher (Martie Blair) later. These moms think it’s adorable watching Connor and Bella together.

Chloe talks to Chelsea about Connor receiving Delia Abbott’s (Sophie Pollono) eyes. She thinks it’s special for Connor to look at Bella with them. At the hotel again, Chance is concerned since “she” is missing. He warns Adam that she’s gone off the radar, but Adam points out that she’ll need to cash one of the checks he sends. Adam isn’t worried and believes she’ll turn up.

Chance feels like Adam had better be right about that. There’s a lot on the line thanks to whatever went down in Vegas. Adam’s paying this woman to keep quiet, so he’s counting on her to hold up her end of the bargain. After Adam heads to the coffeehouse, he spars with Chloe briefly. Chloe snarks that she should’ve left Adam to die in the street, which leads to the realization that she saved him.

Adam learns Chloe pushed him out of the way when Billy Abbott (Jason Thompson) tried to run him down. Chloe lets Adam know that she did it for Billy. She also rubs it in that Adam owes her now. Once Adam joins Chelsea, she questions him about what was going on with Chance. Adam assures Chelsea that there’s nothing to fill her in on.

At Jabot, Kyle Abbott (Michael Mealor) and Summer Newman (Hunter King) are almost ready to leave on their business trip. Jack Abbott’s (Peter Bergman) there to send them off – and Kyle seemingly makes an effort to be civil with Theo Vanderway (Tyler Johnson). Summer grills Kyle afterward about this body-snatcher situation and wonders what’s gotten into Kyle. He’s decided to take the kill ‘em with kindness approach.

Jack corners Theo for a moment to discuss his goading of Kyle. He gets that there have been problems on both sides of this feud, but he wants it to stop. Jack makes sure Theo hears him on this. At Society, Devon Hamilton (Bryton James) talks to Fenmore “Fen” Baldwin (Zach Tinker) about plans to get him back out on the road. Fen opts out of another tour since he’s putting his sobriety first. He wants to eliminate the temptation and stay clean.

Devon’s proud of that decision – and so are Fen’s parents. Michael Baldwin (Christian LeBlanc) and Lauren Baldwin (Tracey E. Bregman) hear Fen’s news along with another surprise. It turns out Fen’s moving to Nashville. Lauren and Michael plan to visit Fen, but Lauren’s still bummed about saying goodbye to her son again.

As for Devon, he reassures Lola Abbott (Sasha Calle) about the fight she had with Kyle. Devon thinks it’s normal to have fights in a marriage, but Lola’s unsettled by her latest one. Things got ugly between them, so it’s easy to see why Lola’s having trouble with this.

Kyle pops in before his trip and hates the timing. He hasn’t been able to talk through his issues with Lola yet. They acknowledge that they’ve been struggling to get rid of the tension, but Lola suggests they’ll work it out once Kyle comes home. After Kyle exits, Theo appears and spots Lola. He decides to leave without approaching her.

At the Grand Phoenix, Phyllis has her own special brand of wisdom to pass along. She talks to Summer about this trip with Kyle. That leads to Phyllis’s declaration that Summer could get Kyle back if she wanted to. Phyllis feels like Summer’s 10 times the woman Lola is. She feels Kyle’s tried to convince himself that he’s in love.

Summer makes it clear she’s not getting to win Kyle back. She gets one last reminder from Phyllis about not being second best and then leaves with Kyle. Phyllis watches them head out with a troubled expression.

The Young and the Restless spoilers say there’s much more drama to come on the CBS soap. We’ll keep you posted as other Y&R details and rumors emerge. Stay tuned to see what else is looming in Genoa City.