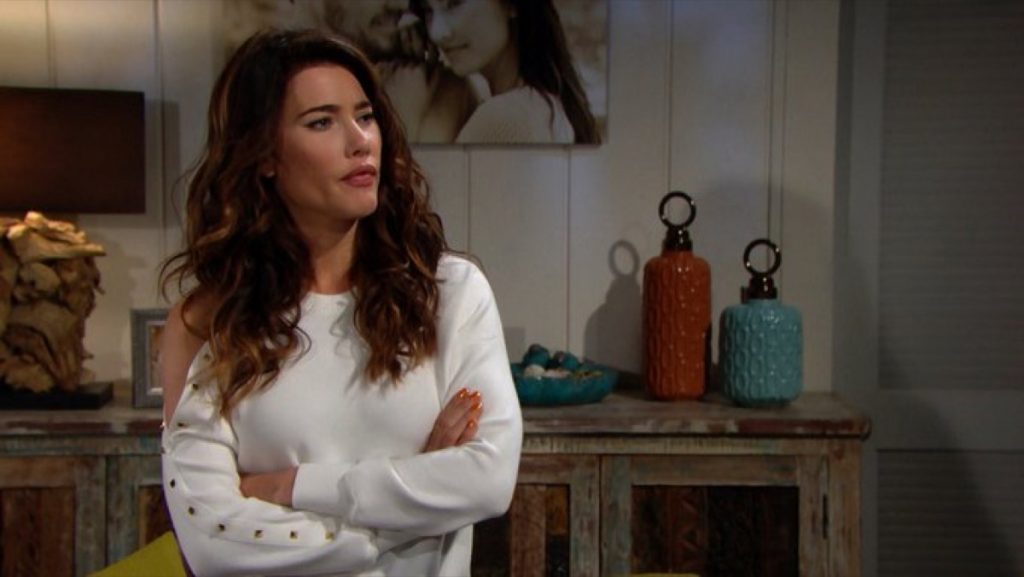 The Bold and the Beautiful spoilers reveal Steffy Forrester (Jacqueline MacInnes Wood) has an argument with her brother. Could it be connected to the reason why Thomas Forrester (Matthew Atkinson) offers her a deal? What are the terms and will she take it?

B&B spoilers indicate Steffy was put in a tough spot due to her brother. He schemed to make sure Liam Spencer (Scott Clifton) and Hope Logan (Annika Noelle) would split up. At the same time, he wanted to give his sister a little bit of happiness, which was in the form of kissing Liam.

It puts Steffy in an awkward position and now Thomas is asking even more of her.

It is teased that fans can expect Thomas and Steffy to get in a bit of a sibling spat. A sneak peek photo published in the latest Soap Opera Digest shows the two at odds. Thomas appears to be explaining himself in that intense way that the villain is known for.

As for Steffy, she has her head tilted to one side with a look of disbelief on her face. Could they be discussing Liam and Hope? Maybe it’s about Brooke Logan Forrester (Katherine Kelly Lang) or Zoe Buckingham (Kiara Barnes)?

The Bold and the Beautiful spoilers reveal Thomas tries to strike a deal with Steffy. While we aren’t sure what the offer is about, it’s a subject that the siblings don’t see eye-to-eye on. If they did agree on it, then there would be no hesitation on Steffy’s part. However, fans speculate that it has to do with Liam and Hope.

Bold And The Beautiful Spoilers: Thomas Promises Steffy A Steam Reunion – Can He Deliver? https://t.co/ZidBBHORaZ

Will Thomas get his sister to accept the deal? Or will she stand firm and leave her brother frustrated and brainstorming other options?

The Bold and the Beautiful Spoilers: Secrets and Schemes

There is no question that the next few weeks will feature more secrets among several characters. Thomas and Steffy aren’t the only ones hiding something. Sally Spectra (Courtney Hope) is too, although it isn’t shameful or sinister.

Fans can also look forward to some scandalous schemes as the war between Brooke and Quinn Forrester (Rena Sofer) escalates to epic proportions. It is hinted that Quinn could find a powerful ally. Thomas approaches her with the suggestion to join forces and together, they can get rid of Brooke once and for all.