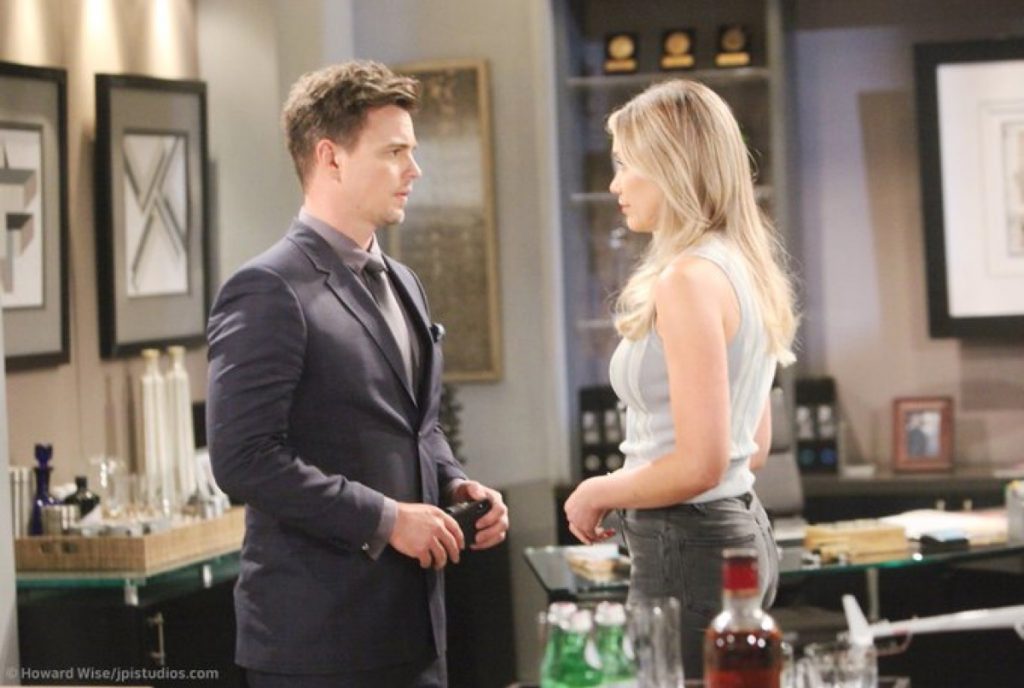 The Bold and the Beautiful spoilers for Wednesday, January 15, tease that Flo Fulton (Katrina Bowden) and Wyatt Spencer (Darin Brooks) will once again enjoy each other’s company.

As B&B viewers know, Wyatt has just seen Flo for the first time in several weeks. He was at Forrester’s main house when he learned from Shauna Fulton (Denise Richards) that Flo was back in town and in the guesthouse.

Wyatt headed straight to see Flo, and on Wednesday’s B&B episode, the two will continue talking. It seems that while they’re chatting, they may get invitations to a family get-together hosted by Katie Logan (Heather Tom). The Bold and the Beautiful spoilers say that Katie will invite several people to a family meeting. It looks like Wyatt and Flo will compare notes at the meeting, and they’ll decide to attend together.

The Bold and the Beautiful Spoilers- Will Wyatt Spencer & Flo Fulton Get Back Together?

Could this be a sign that Wyatt and Flo are on the path to a reunion? After all, Wyatt recently admitted to his mother Quinn Forrester (Rena Sofer) that had overreacted when he dumped Flo last year. B&B viewers will remember that he broke up with Flo right after the truth about her involvement in Reese Buckingham’s (Wayne Brady) illegal adoption scam came out. Wyatt promptly dumped Flo and got back together with Sally Spectra (Courtney Hope).

But now things aren’t going so well in his relationship with Sally. It’s been noted on B&B that things were strained between the two of them at Christmas, and let’s face it, Wyatt just doesn’t seem happy with Sally anymore. Ever since Sally accidentally called Wyatt by Liam Spencer’s (Scott Clifton) name, Wyatt has been soured on the relationship. At this point, he’s really looking for an excuse to bolt from Sally, and he might have just found that reason in Flo.

Next, on Wednesday’s new episode of B&B, Brooke Forrester (Katherine Kelly Lang) will be beyond outraged. As B&B viewers know, she can’t stand Shauna, and she hasn’t been keen on the fact that Shauna has been staying in Quinn and Eric Forrester’s (John McCook) guesthouse – in the same mansion here Ridge Forrester (Thorsten Kaye) is staying.

But Brooke is now going to learn some details from Ridge that will make her furious. According to B&B spoilers, Ridge will come clean with Brooke and admit that he and Shauna have kissed on several occasions. Well, that’s not going to sit well with Brooke at all, and she’s apparently going to unleash her rage over the situation.

First, Brooke will probably turn her rage onto Ridge. She’ll likely point out that Ridge has been begging her to reconcile for weeks, while the whole time he’s been secretly kissing Shauna. Ridge will surely get an earful for that.

Of course, Ridge might point out that the only reason they’ve been apart has been Brooke’s unwillingness to accept his son, Thomas Forrester (Matthew Atkinson). In other words, he never would have been in a position to kiss Shauna if Brooke hadn’t taken off her wedding rings and asked him to move out in the first place.

The Bold and the Beautiful spoilers also say that Brooke will immediately get the urge to go confront Shauna about what she perceives as an outrage. As B&B viewers will remember, Brooke has warned Shauna in the past about trying to cozy up to Ridge. She even slapped Shauna at one point in the past, during an argument in Flo’s apartment.

Well, it seems that Brooke will be on the warpath again, as ongoing B&B spoilers say that she’ll go after Shauna once again and end up slapping her in anger. Of course, that probably won’t deter Shauna that much; in fact, it just might have the opposite effect and make her go after Ridge even more!

At any rate, once Brooke finds out about the stolen kisses, she’s going to go on a tear, and eventually, Quinn and Eric will get involved. It’s sure to be a big family squabble as sides are taken and the drama unfolds.