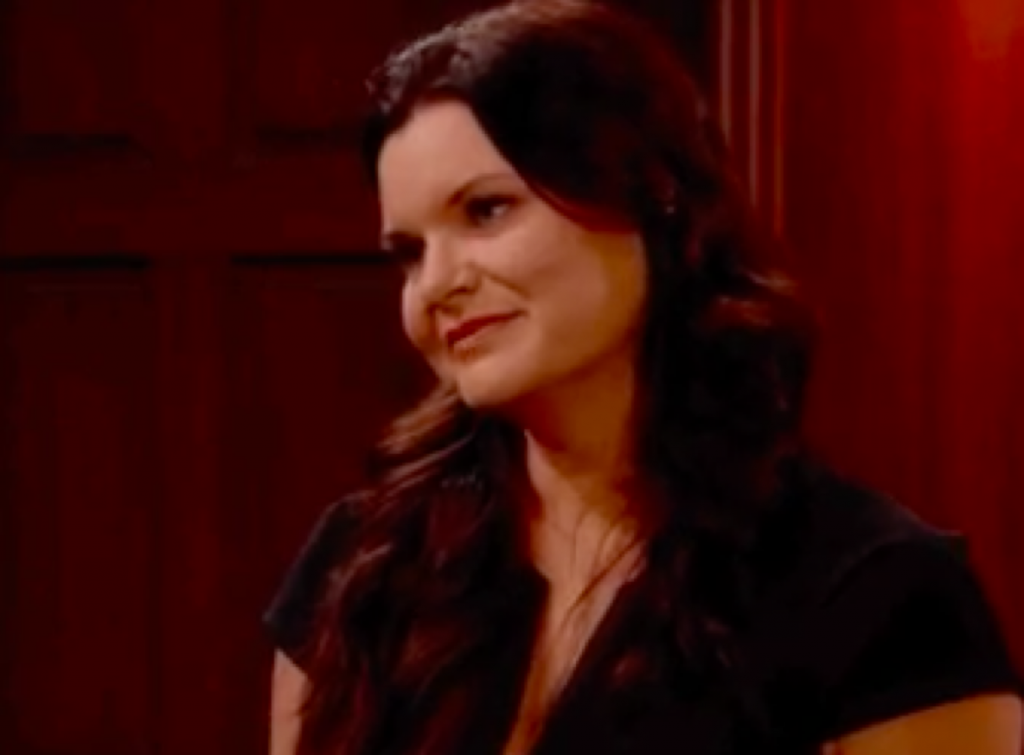 The Bold and the Beautiful spoilers for Tuesday, January 14, tease that Katie Logan (Heather Tom) will make a request for some of the key people in her life. B&B viewers haven’t seen much of Katie lately, as she’s been off recuperating from her kidney transplant surgery. She was fortunate to get a donor – Flo Fulton (Katrina Bowden) – in the nick of time to save her life.

Well, on Tuesday’s B&B episode, Katie will call a meeting that will leave the people whom she invites scratching their heads. Exactly what Katie will want to discuss won’t be entirely clear, although B&B spoilers indicate that she’ll have something very important to say and that she’ll also ask for forgiveness from the people she loves.

Meanwhile, B&B viewers will see another character return to canvas who’s been off-screen for a while. According to B&B spoilers, Shauna Fulton (Denise Richards) will catch up with her daughter Flo. Like Katie, Flo has been taking time to recuperate from her kidney surgery.

On Tuesday’s episode, Flo and Shauna will visit, and it looks like they’ll be talking about what the future holds for them both. The topic of Wyatt Spencer (Darin Brooks) will inevitably come up, since he was such a big part of Flo’s life there for a while.

As B&B viewers will remember, Wyatt broke things off with Flo after he found out that she willingly worked alongside Reese Buckingham (Wayne Brady) to keep Beth Spencer (River Davidson and Madeline Valdez) from Hope Logan (Annika Noelle) and Liam Spencer (Scott Clifton).

It’s certainly been a while since Wyatt and Flo have seen each other, but the last time they visited, they seemed to get along well. As Shauna and Flo talk, it looks like it will become clear to Shauna just how much in love Flo still is with Wyatt. B&B spoilers say that Shauna will urge her daughter to stay in the game and fight for the man that she loves.

Of course, B&B viewers know that this would be a perfect time for Flo to come back into Wyatt’s life, since he is having serious reservations about his engagement to Sally Spectra (Courtney Hope). Wyatt just doesn’t feel like things are right between him and Sally, so reconnecting with Flo is probably just what he needs.

Finally, on Tuesday’s new episode of B&B, Steffy Forrester (Jacqueline MacInnes Wood) will find herself seriously worried after she sees some of Sally’s designs for the upcoming fashion showdown. As B&B viewers know, she and Sally are a team competing against Hope and Thomas Forrester (Matthew Atkinson).

Apparently, something will be off with Sally’s designs, and Steffy won’t be impressed. B&B viewers will remember that Steffy wasn’t thrilled with some sketches that Sally showed her previously, and she asked for some changes. Unfortunately, it seems that Sally either won’t have made the changes, or she’ll have misheard Steffy and made changes that Steffy won’t appreciate.

At any rate, look for Steffy to start to really get concerned about the competition. Hopefully, there will still be time for her and Sally to get on the same page and get themselves to a competitive point, otherwise, Hope and Thomas could win.