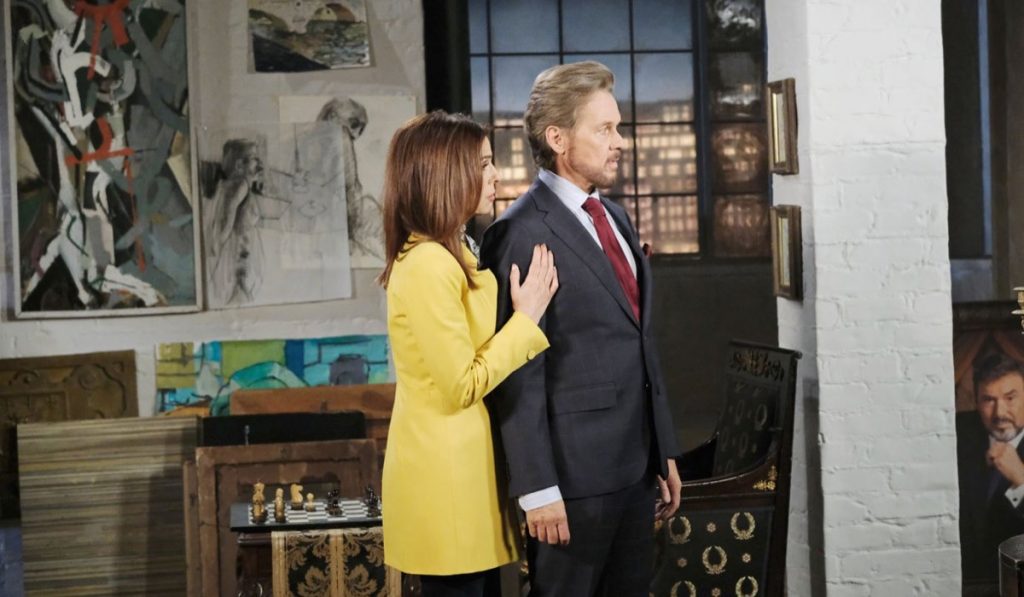 Princess Gina Von Amberg aka “Hope Brady” (Kristian Alfonso) and Stefano DiMera aka “Steve Johnson” (Stephen Nichols) devise a new plot to break up John Black (Drake Hogestyn) and Marlena Evans (Deidre Hall). Stefano comes up with a strange idea – at least it’s strange as far as Princess Gina is concerned. He tells her that for her to have John and him to have Marlena, that they both have to die!

Abe Carver (James Reynolds) is stunned when Eli Grant (Lamon Archey) fills him in about his daughter, Lani Price (Sal Stowers) and that he has proof positive that she vandalized the Gabi Chic store in Horton Town Square by throwing a large flowerpot through the storefront window, shattering it to bits! Abe doesn’t even know she has come back to Salem, and the last time he heard she was studying to be a nun! Abe will be even more stunned when Eli tells her she was dressed in her nun’s habit when she committed the mischief!

JJ Deveraux (Casey Moss) pays Gabi Hernandez DiMera (Camila Banus) a visit – with a hidden agenda! He is helping out Lani by going undercover, in a sense, with the intention of getting Gabi away from her cell phone or Gabi’s cell phone away from her so he can have a crack at disabling the pacemaker app.

As Days of Our Lives viewers will recall, Lani told him everything in Tuesday’s episode, from how Gabi blackmailed her to dump Eli at the altar by threatening to kill Julie Williams (Susan Seaforth Hayes) to recently, when Gabi revealed the app was still active and reminded her not to try anything stupid, making fresh her threat to kill Julie with the app!

Meanwhile, Julie has some bold advice for Kayla Brady, (Mary Beth Evans) who has been thrown for a loop by the return of who she thinks is her ex-husband, Steve Johnson! He still is Steve physically, it’s just that he has an unwanted brain squatter named Stefano DiMera! Kayla has been more affected by his return and his coldness towards her than she expected, especially after she has moved on with Justin Kiriakis (Wally Kurth) – or has she?

That will likely be exactly what Julie will ask her, along with some bold, outspoken advice like only “Grandma Julie” can dish out, and tell Kayla to make up her mind whether she wants Justin or if she wants Steve, and if she wants Steve, maybe she’s better off staying without him!