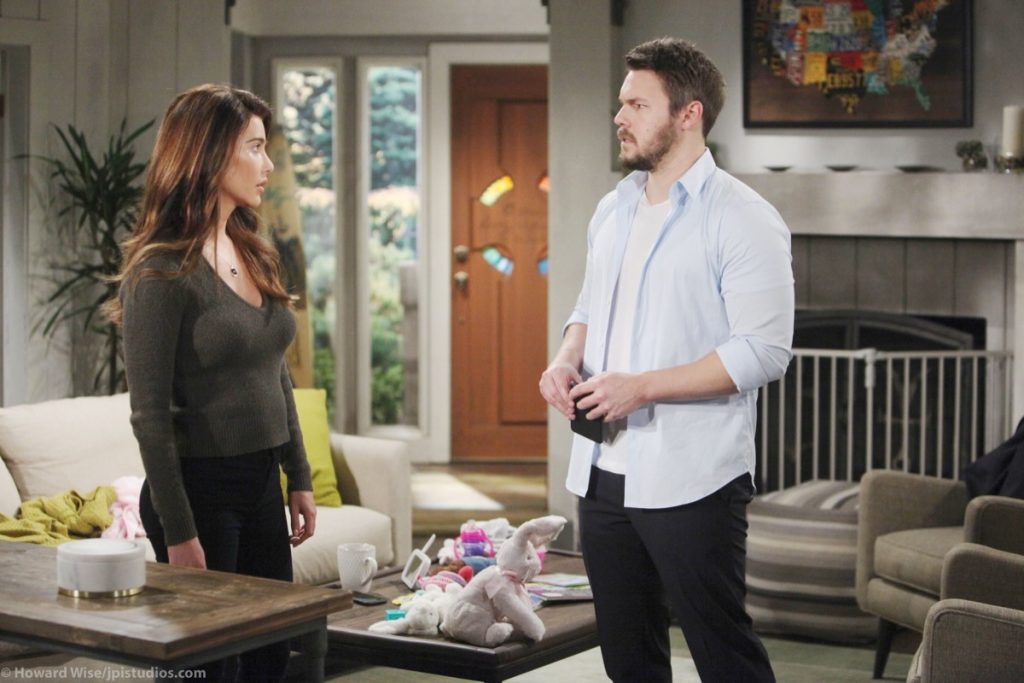 Steffy Forrester (Jacqueline MacInnes Wood) never stopped loving Liam Spencer (Scott Clifton) on ‘The Bold and the Beautiful’. She had a child, Kelly Spencer (Zoe Pennington and Allison Marcia Sweeney), with him before Hope Logan (Annika Noelle) had Beth Spencer (Madeline Valdez and River Davidson), who Steffy raised during the first months of her life, by the way.

Thomas Forrester (Matthew Atkinson) is right when saying that Steffy has to fight for her family. He’s also on point when telling his sister that she doesn’t owe Hope anything.

Steffy had stopped believing that ‘Steam’ would be revived. She’d resigned herself to being satisfied with Liam’s visits, the times they shared with their daughter, and reminiscing by looking at that fabled photo that hangs above the mantle at the cliff house.

However, the orchestrated event Thomas successfully pulled off now allows the very real possibility that Steffy’s dreams, not Hope’s, will be revisited.

The masterfully filmed outdoor shot that took place in the cliff house’s back yard setting had Thomas digitally alert his sister to Hope’s imminent arrival. On cue, Steffy made sure to embrace Liam and then to kiss him. But he kissed back, as was later acknowledged.

Bold And The Beautiful Spoilers – Liam Spencer Unaware Of Manipulation

So, a ‘Steam’ sequel is doomed by Steffy withholding that she was part of a setup? Well, maybe not.

Liam’s feelings about Thomas being an outright psychopath would seem to soften him to hammer Steffy when its learned that she was in on the game her brother was pushing. Thomas was manipulating matters in his latest attempt to win back Hope.

Steffy wasn’t involved in deep plotting. But rather was informed in real time of what was happening and made a snap decision to go along. Sure, she knew it wasn’t honest. However, Liam’s presumed retrospect analyzation will also include whatever happens between that point in storyline time and what develops after.

The Bold and the Beautiful Spoilers: Full Steam Ahead – Hope Cries To Brooke Over Steffy And Liam’s Kiss https://t.co/VqZt707hMX pic.twitter.com/fPqqoQNesP

Bold And The Beautiful Spoilers – Steffy Forrester Has Clear Path

Hope’s rush to gather Liam’s personal items, in what seemed like two modestly sized carry bags, was packed along with the latest emotional fallout that everyone in this arc is part of. Her forced end of ‘Lope’ feels permanent, as it was coupled with a music-themed retrospective of the couple that’s again in peril.

Noelle’s character was surely crushed by seeing her intended fiance kiss his other love. Their excuses weren’t explanations and she was understandably mystified by Liam’s less than 12-hour turnaround, going from remarriage proposer to seeming betrayer.

Thomas could be tagged as using his sister as an attempt to gain another look from Hope. But whatever the subjective interpretation, Steffy has gained a clear path back to her one-time family if she’s willing to do what it takes, as her brother is encouraging.