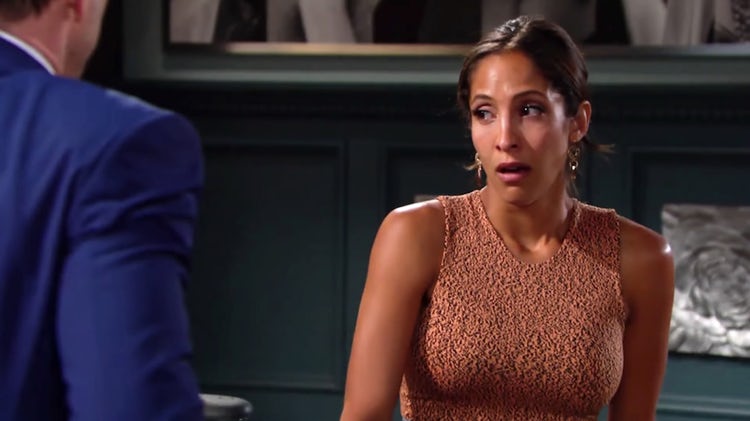 The Young and The Restless spoilers tease that Lily Winters (Christel Khalil) will once again return home to Genoa City for a visit in an upcoming episode of “The Young And The Restless!”

The Young and the Restless viewers will recall that Lily last came to town to help her brother Devon Hamilton (Bryton James) decide what the right thing was to do when he found out that Cane Ashby, (Daniel Goddard) was the one Katherine Chancellor (Jeanne Cooper) wanted to have the bulk of her estate, not him, and he had spent a lot of the money. At the time he gave Cane what he could and later both of them found they’d been conned by Cane’s father, Colin Atkinson (Tristan Rogers). Devon still doesn’t trust that Cane wasn’t in on it, but he’s left town trying to track down the money since Colin stole it from him!

Devon once again has come to a difficult realization, this time that he had been fixated on Amanda Sinclair (Mishael Morgan) because of her resemblance to his late wife, Hilary Hamilton (Mishael Morgan) and Lily may be coming to help him sort things out. This realization has hit him hard and he needs to talk to someone who knew Hilary and knows him better than almost anyone else before he talks to anyone else about it, and comes clean to Elena Dawson (Brytni Sarpy) and then he will talk to Amanda herself to set some boundaries.

Young And The Restless Spoilers: Rey Comforts Sharon When She Tells Him She Had To Have A Biopsy https://t.co/ZQS2PPnRwo pic.twitter.com/9CHOCoENUt

Longtime viewers of The Young and The Restless will recall that Lily is a cancer survivor; in her case, it was ovarian cancer that she suffered from. After a total hysterectomy in 2010, which includes the ovaries and fallopian tubes being removed in addition to the uterus, Lily is in remission and has been cancer-free ever since. Now someone else in Genoa City may be benefitted by Lily’s encouragement and her survival for ten years cancer-free: Sharon Newman (Sharon Case). Spoilers don’t exactly spell out that Lily will help Sharon cope with her diagnosis, but it seems like it would be an opportune time for a ten year cancer survivor to come to town to encourage a newly diagnosed cancer patient while she’s there.

Lily would know and understand every fear Sharon has very well and would be able to offer her some hope and coping tips. The Young and The Restless spoilers do say that Billy Abbott (Jason Thompson) will also seek Lily out for some advice, but this will relate to his own situation and tie in to his friendship with Amanda. It is also quite an interesting coincidence that Lily’s middle name is Amanda, but probably just a coincidence, although she did come to know Amanda’s doppelganger Hilary very well!